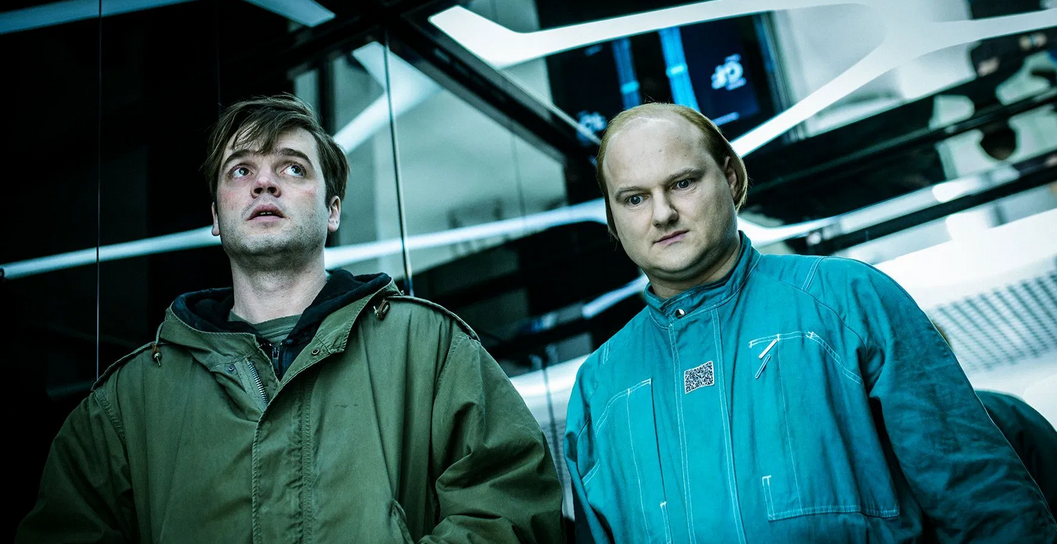 The film opens on Adam (Piotr Poladk), a man who comes out of the river and doesn’t remember anything about how he got here. A man agrees to help him and provides lodging in a dilapidated apartment that predates world war two. He is given a job as a janitor where he spends his days mopping and following office protocols despite his constant gaze upon an executive named Gloria (Olg Goladz). A flirtatious game of cat and mouse begins to unfold between them as Gloria encourages Adam’s pursuits only to toy with his interests, despite his co-worker Sebastian’s warnings, Adam remains persistent. Underneath the cold rain that constantly falls in Warsaw is the invoking performance of Olg Golandz and Piotr. The romance between Adam and Gloria is testing, complex and captivating. Gloria’s domineering of Adam highlights many issues of class and the mixture of business and pleasure but it feels much more of a socio-fetishism. Gloria teases Adam, encourages him to ask him out only complain when he does and agrees to have sex with him but never to love him. She’s constantly hanging herself just a few inches away from Adam.

It’s not until he discovers an old radio that his fixation turns to an illegal and mysterious meditation broadcast. Captivated, Adam follows the meditations and experiences an out of body experience that flashes to the distant past of 1940’s Warsaw. Upon showing Gloria and Sebastian he’s warned that the radio shouldn’t be messed with. In Sebastian it awakens a fear of other possibilities beyond his simple lot in life and in Gloria it awakes a heartbeat that threatens her sense of order. But Adam remains more persistent than ever to fix the radio and discover what he’s found on the other side. Adam disappears and Gloria suddenly yearns for her former “insensible choice”. A yearning that leads her to discover a world of time travel, lost love, the awakening of a human heart amidst the wastelands of the machines and the government agents lurking outside his house and monitoring Adam’s every move.

What makes any sci-fi worth its salt is the craft of world building. Having been nominated for awards in production design and film score, Kox shows his ability to not just direct a movie but a vision. Under the bleak grey skies of Warsaw nearly all aspects of life are automated. Workplaces are occupied not by computers but people with optic nerves connected to grid, postage and deliveries are entirely autonomous, scanners are everywhere (even the street lamp knows your name) and roombas are the new household pet. Chaos is in the streets as disease incites civil unrest, terrorism causes government overreach and it all feels too close and real for any comfort. All of which is captured by the keen eye of Kox’s lense that establishes its constant tone of stark realities both there and before. Undertoned by a brilliantly emotional scoring, Kox’s vision maintains a striking tone that contrasts the bleak realities with the warming of his actor’s performances to deliver a captivating sci-fi vision that may feel a bit too close to home.