It’s been quite a run for the “Isolation Thriller/Horror” genre in the past few months. After we got the nail biting tension of Bryan Bertino’s The Dark and the Wicked, John Hyams’ brilliant adrenaline rush of a movie Alone and finally Shawn Linden’s unsettling and brutal Hunter Hunter (starring Final Destination’s own Devon Sawa, cutting quite the grizzled woodsman), I have really become quite fond of this kind of genre piece. Small cast, secluded location, pure tension and unnerving sequences of harrowing danger and threat of death. What could be the next bonkers horror/thriller set in a secluded locale that would bring the tension and horror and crank it up to 11? Well along comes Jordan Graham’s desolate and horror-tinged demonic thriller, Sator, and boy oh boy does this movie quench my need for movies that make you want to scratch your skin off in fear.

Secluded in a desolate forest home to little more than the decaying remnants of the past, a broken family is further torn apart by a mysterious death. Adam, guided by a pervasive sense of dread, hunts for answers only to learn that they are not alone; an insidious presence by the name of Sator has been observing his family, subtly influencing all of them for years in an attempt to claim them.

Sator is the very definition of a slow burn film. Clocking in at a respectable 86 minutes, we are slowly introduced to the various members of a family seemingly haunted and vexed by some outside force. Adam (Gabe Nicholson) lives out in the woods, on the lookout for any sightings of the mysterious Sator that might be closing in. Pete (Michael Daniel) occasionally comes to check on him and see how he is doing. Nani (June Peterson) and Mother (Wendy Taylor), living back at the main house, continue to be haunted and in close contact with this malevolent spirit. As the movie progresses, things slowly begin to unravel with some nifty dread sequences, usually under the pure blackness of the forest at night. Great use of surround sound, which throws the viewer into disarray of where the disturbances might be coming from, always keep you on your toes. All the leads, newcomers to the acting space, doing a serviceable job to keep the viewer engaged. The slow burn of the film comes to a screeching halt in the final 10 minutes, when the spirit seems to put its plan into effect and causing mass destruction to what is left of the family. It’s quite harrowing and leaves the viewer stunned. The only real gripe I might have with the overall film is that it can be somewhat too vague for my liking and leaves a lot of unanswered questions about the basic overall plot and what exactly has been befalling this unfortunate family.

As I learned after the fact, there might be a reason for the ambiguity. Sator is a nifty combination of black & white home video footage in 4×3 format spliced with the typical color 16×9 widescreen aspect, all of which is done for a specific reason. Director Jordan Graham, who essentially did every aspect of the behind the scenes role (score, effects, producing, etc.), took seven years to make this film because this is a pseudo-documentary. Three generations of women in Graham’s family had fallen victim to the influence of this being Sator, and he painstakingly took years to bring the aura and feeling of what happened to his family and the damage it did to the screen. I think it would have been beneficial for Jordan Graham to perhaps include an introduction to the movie itself, which would only take a few minutes, to explain the history of this movie and how personal it is to him. I don’t believe it would have been too hokey or taking anything from the movie, but rather increased its effectiveness. 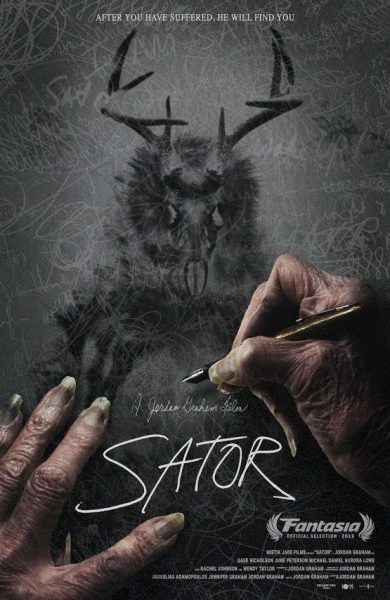 Sator is a very personal film to a filmmaker who spend a good portion of his adult life trying to bring to life, to spread the word of what befell his family to others in order to work out his own inner turmoil and perhaps tell a cautionary tale of old age, dementia and how people can be susceptible to malevolent outside forces looking to do no good. I would love and hope to see director Jordan Graham tackle something in the horror space that is of pure fiction, bringing all the techniques, pacing and dread-inducing cinematography that he brought to Sator. It might be something truly special.

Sator is available now on your favorite VOD platform.