While 19 years separate the releases of these two films, both 2002’s The Collingswood Story and 2021’s Deadware harken to a time when high tech wasn’t what we’ve come to expect in today’s day and age. With use of what was cutting edge at the time of filming The Collingswood Story, yet has become nostalgia for elder Millenials in the era when Deadware was filmed, both have a look that is sure to warm the cockles of anyone who was using video chat, AIM, old school modems, and earlier Windows operating systems in the early oughts.

The two films share much in common, but the 20 year gap between the two means that there are vastly differing ideas, intents, and technologies behind the camera. The results in both cases are extremely enjoyable and anyone who enjoys modern films like Host or Searching, but yearns for the days where they downloaded music from Napster and YouTube was only a sparkle in some Ebaum’s World user’s eye… these films are for you!

Yes, kids… video chat really was this primitive in its early days. Those of us in our 30s and beyond can recall days where we didn’t have video phone calling options and all we actually had on the other end was a voice – but, thanks to the world of computing and programs that we could use in conjunction with our dial-up modems, we had video chat programs that we could use to see our friends when talking to them. The portability of video chat on a phone or tablet was still years off and there was a ton of lag, but alas… we had faces to go with those voices.

While Hollywood attempted to weave these technologies in with varying levels of success, 2002’s indie POV horror was actually pretty ahead of its time, essentially doing what Host was heralded for 18 years later in the height of the pandemic – but to much less fanfare. In fact, horror fans of my age, the very target demographic for this film, by and large still don’t know that this film exists. This is a damn shame, as it’s a picture perfect time capsule in so many ways.

Without ruining any of the fantastic little twists and turns, here’s a brief synopsis from the film festival’s program:

Shown through turn-of-the-millennium desktops, The Collingswood Story is a pioneering digital horror film. Josh and Rebecca begin using webcams as a way to maintain a newly distanced relationship when a curious encounter with an internet psychic complicates their lives and uncovers dark secrets about Rebecca’s new home. Before Skype and MySpace existed, filmmaker Mike Constanza’s revolutionary, essential film embodies a phase of internet culture midway between the 90s acceptance that, “On the Internet, nobody knows you’re a dog” and the unblinking, totalizing digital platforms of the present”

Alas, we’re presented with a haunted house type film that blends the hokey Internet psychic, the obsessive boyfriend, and the technology of the late 90s and early oughts to an extremely successful degree. And, as someone who grew up in North Jersey and lives in suburban Philadelphia now, a setting smack dab in between those two spots was a pretty stellar choice in keeping my particular interest, as well.

Highly recommended for anyone “of a certain age” or interested in all that is “retro”.

While The Collingswood Story uses the old school Windows based video chat software set up to tell us a haunted house story, Deadware goes the online gaming route. For the latter Millenials and Zoomers, this isn’t the same kinda of online gaming you’re used to. Instead, it’s a slow web-based RPG style of gaming where you walk around slowly in a poorly animated setting with massive amounts of lag, often solving puzzles and more often watching a spinning wheel as something loads.

As someone who played games like 7th Guest and 11th Hour before the Internet really took off and then played similar puzzle games on websites in the late 90s and early oughts, I can most certainly relate to this type of “online gaming” and was immediately drawn in by the game in this film – the ominous and creepy House of Hunger.

The film’s set up is simple:

Set in 1999, Deadware explores the early internet through masterful use of the screenlife format, following two friends who decide to play a questionable online point-and-click adventure game to test out their webcams and brand new DSL connection

Though playing the creepy webgame together, friends Jay and Megan learn a good deal about each other and parts of each other’s lives they’ve missed out on. Some of these revelations prove to be dangerous, as the game sucks them in… figuratively and quite literally. A great example of using this “screenlife” POV format to tell a strong story, Deadware is a must watch gem from this year’s UFF lineup. 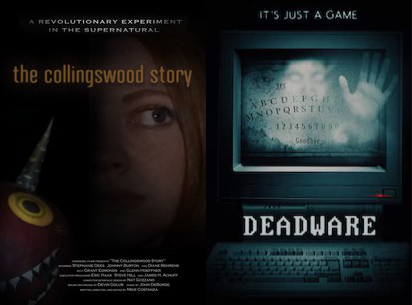 Luckily for all of you reading this, while The Collingswood Story is available for rent on Amazon, this one is actually free for Prime users. So if you’re cheap or broke and are reading this, you can start with this 2021 throwback jam before digging into the OG. Hell, for only $3.99 total (if you’re a Prime user), you can rock a great double feature!