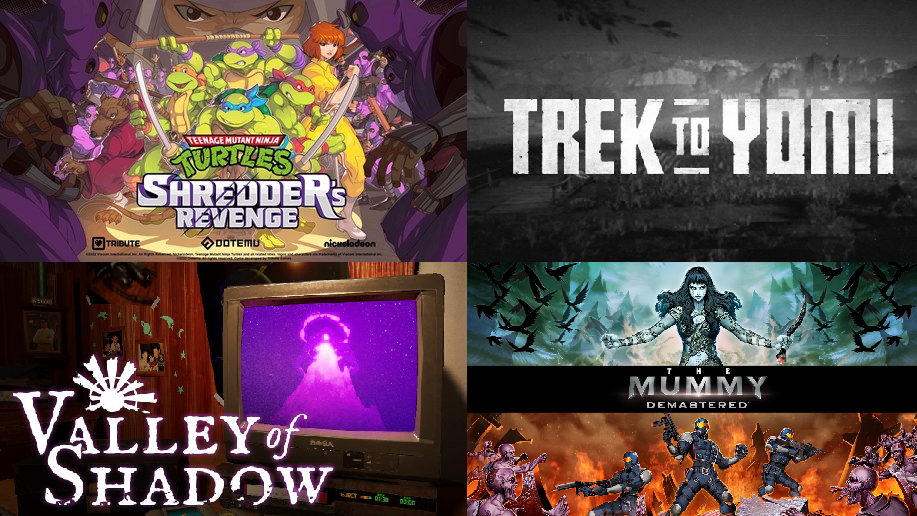 After attending PAX East for the first time in 2020 – right before the pandemic really came into full swing, I was enamored with having access to a multitude of game demos along with various shops and even various board game companies setting up a variety of demo stations to show off the latest in tabletop escapades. As we all know, conventions essentially were shutdown as COVID took over the world. After learning that PAX East was coming back with a 2022 show, I was initially weary on whether I wanted to attend. However, with the declining rates and the need for proof of vaccination/mask, I was somewhat satiated in my fears and decided to attend on Saturday only for this year’s event. Check out below for my quick thoughts on a few demos I tried (one of these was the very reason that I wanted to go to PAX East this year) plus my thoughts on a game that I purchased at the show that’s already released but I felt the need to get on everyone’s radar to play it RIGHT now. 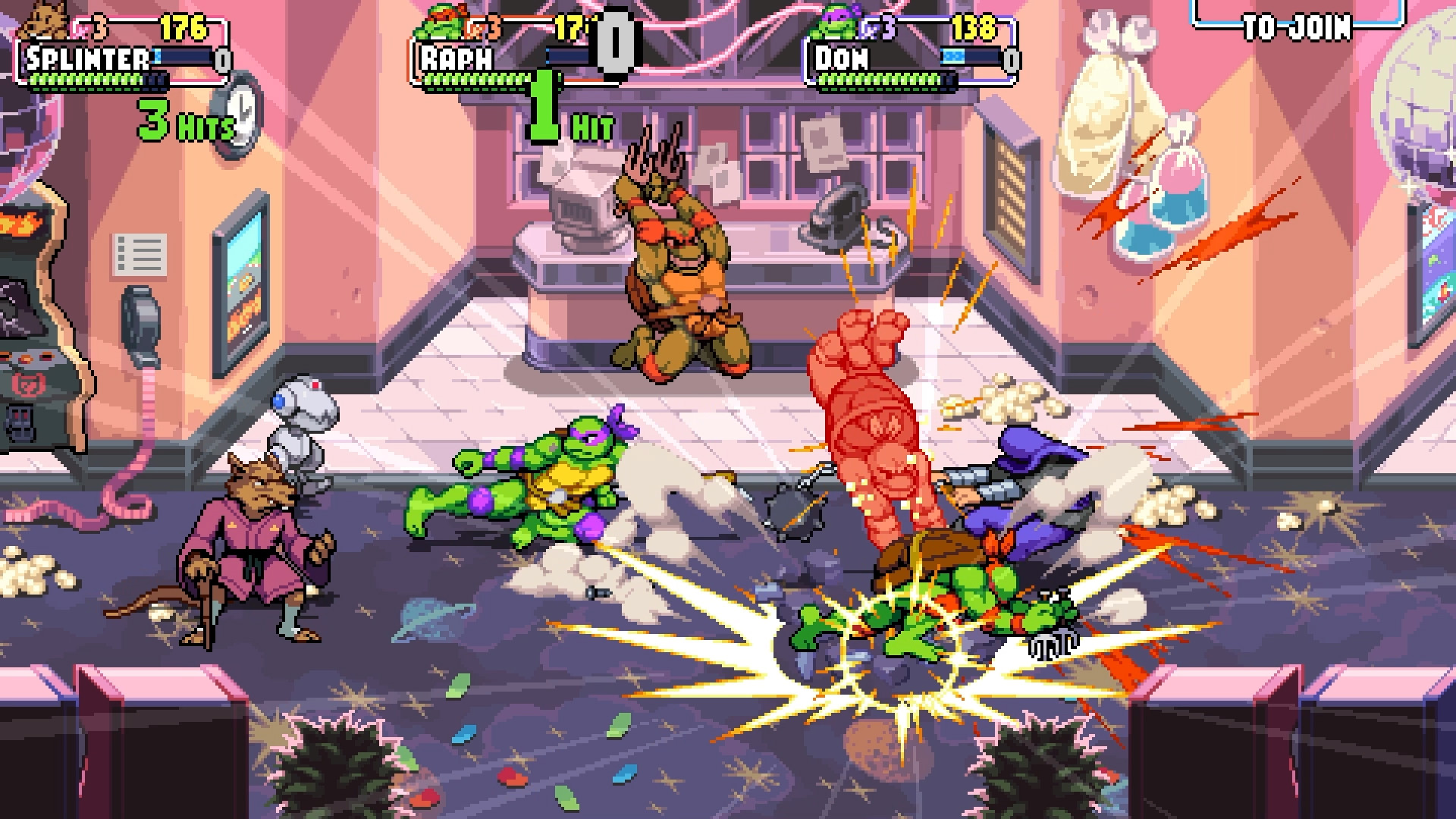 This was the game that literally made my trip to Boston all the worthwhile. I am a known superfan of the old school 90’s beat-em-ups from the 16-bit heydays. Streets of Rage, TMNT Turtles in Time, Batman Returns (SNES). The list goes on. After the successful release of Streets of Rage 4 back in 2020 (which was also my GOTY that year), I was stoked for the beat-em-up renaissance. The uprising continued when TMNT: Shredder’s Revenge was announced in late 2021. A brand-new classic sprite-based brawler, feeling like a direct sequel to Turtles in Time, was just what I wanted. After getting my hands on a two-level demo at PAX, I was sold. This is going to rock. The smart choice to add Splinter and April O’Neil to the four turtles as playable characters was a stroke of genius. Everything felt right. Controls were tight and responsive, sprite mayhem with multiple foot soldiers getting destroyed at all angles. Playing the demo with three other players really demonstrated the true reason why these games are awesome. You can hop in quick, learn what to do and have tons of fun, all while presenting a challenge to the experienced veterans who are familiar with these games or novices who might need a turtle or two to help finish the fight. The boss fights at the end of each level – Bebop in the first, and Rocksteady in the second – were visual marvels of expertise sprite work, as well as just being hella fun to play, feeling great satisfaction in overcoming both of those monstrosities. I need a solid release date on this ASAP! Can’t wait. 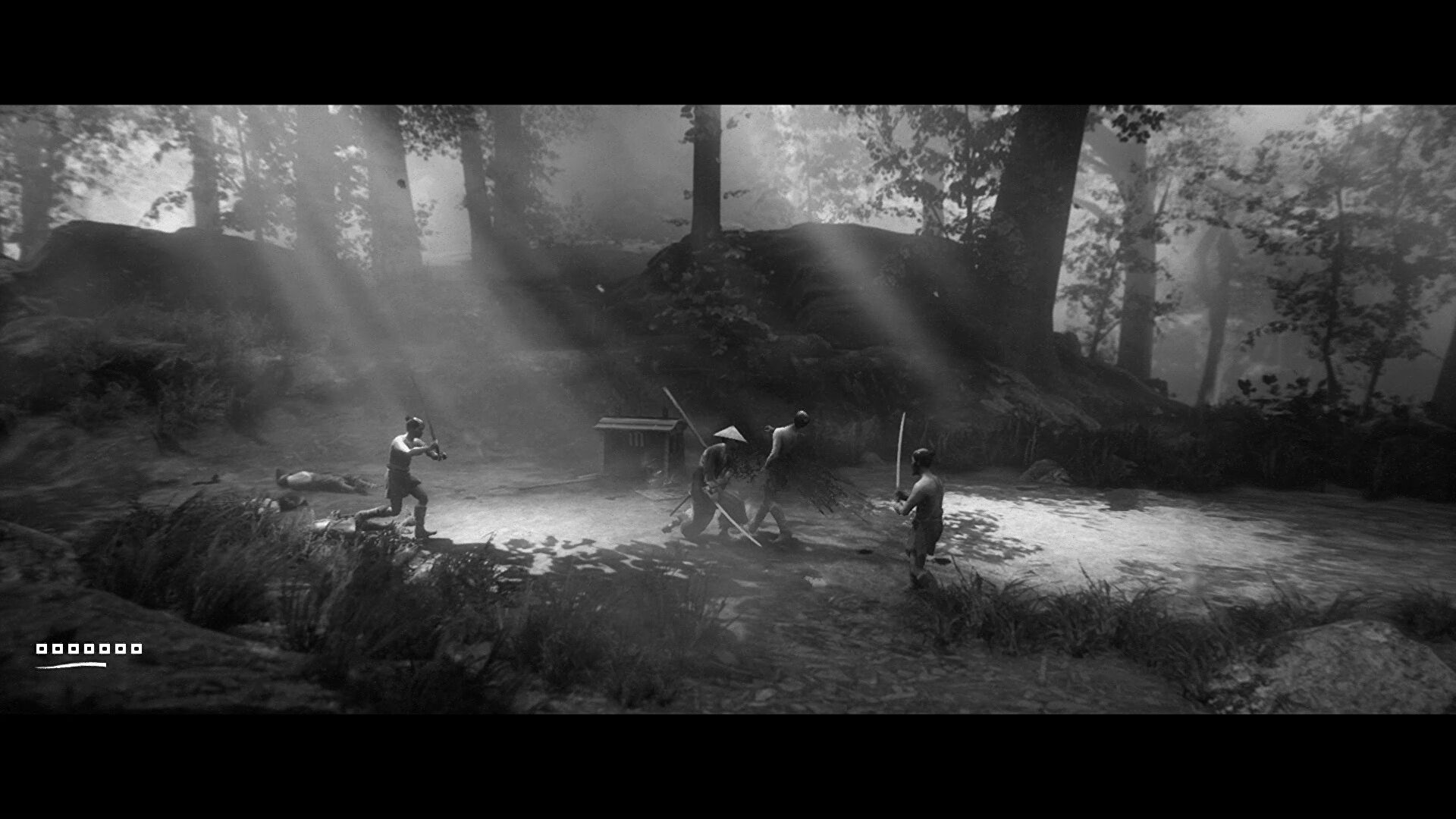 After experiencing the awesomeness of Sony’s Ghost of Tsushima back in 2020, I was ready for my next adventure involving samurai’s and gorgeousness of open forests and beautiful fields of blood and chaos. Trek to Yomi, published by Devolver, is angling to fill that void I have been feeling. A gorgeous black and white, 2.5D hack and slash adventure, the demo that I played at PAX immediately lets the player know that this will NOT be an easy game to overcome. Playing as a young swordsman named Hiroki, every fight requires expert use of the blocking mechanic and when to smartly use the light and strong heavy attacks to take down the current foe you are facing. I must have died at least a dozen times in my short time with the game, and I wasn’t even fighting any potential boss fights that are bound to loom on the horizon. The controls are responsive, the graphics are a gift from the visual gods, and the choice to make it a 2.5D was a smart one, making you feel every step of Hiroki’s journey as you progress through dead villagers, burning houses and bad guys just itching to take you down. 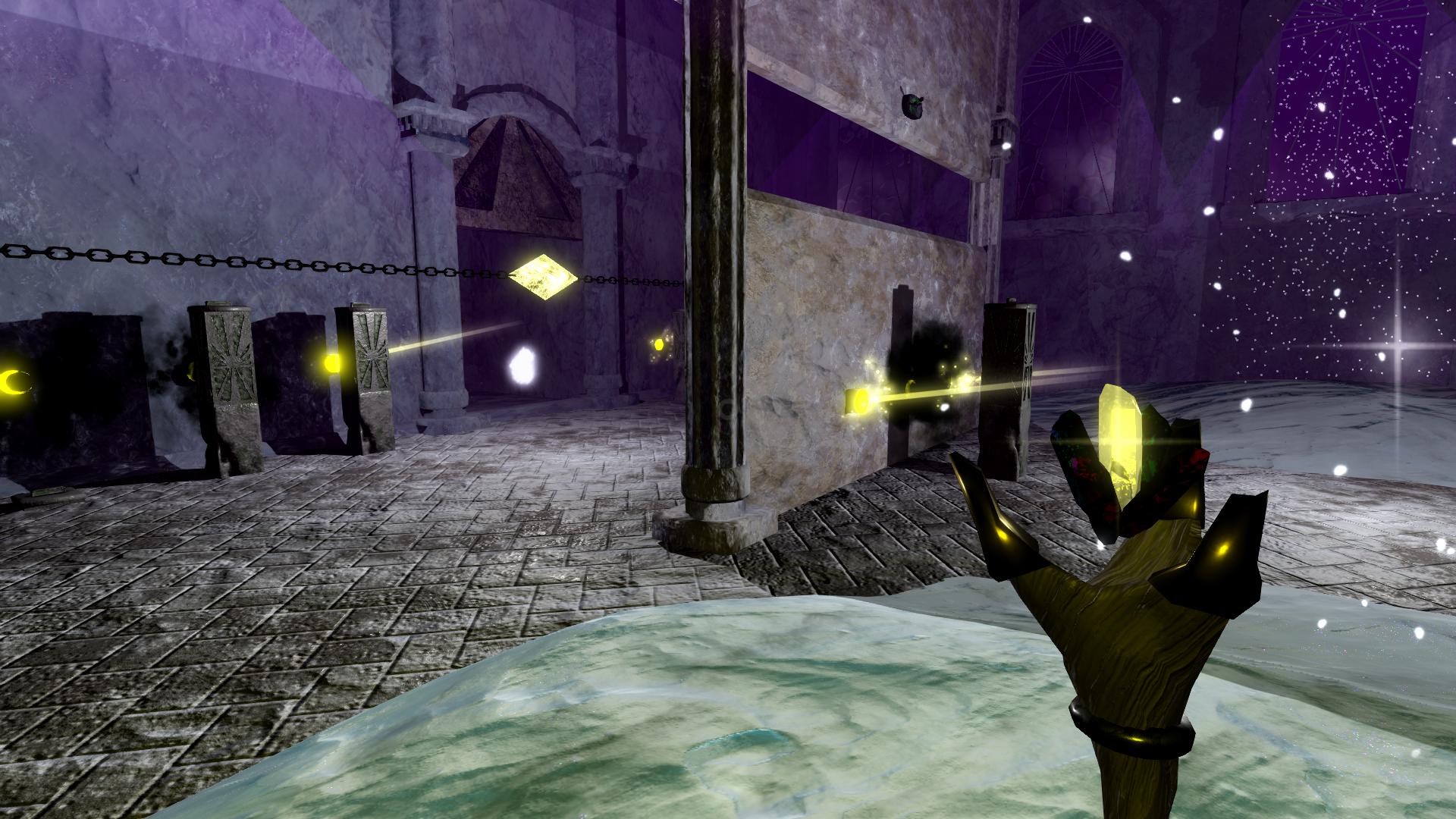 This was the one demo where I had no prior knowledge in any way. I was just walking by the booth, saw an empty chair waiting to be filled, and a demo waiting to be attempted, so I sat down. Valley of Shadow is billed as an “autobiographical puzzle game”, and in my playing time I can clearly see how the game got that distinction. The game is layered with various photos and videos of the developers of this game, seemingly retelling a traumatic event that occurred in their lives, all while solving various puzzles in sectioned off room using a lighted staff to light up or turn off various switches necessary to move to the next room and uncover the rest of the story. While this may initially not sound very intriguing to the average player due to the heavy nature of the narrative and relatively simple puzzle mechanics at the outset – at least from what I played before the demo ended – there was still something about it that was hyper unique. Bringing your own pain and demons into a puzzle game to tell the story of something that happened to you personally is not an easy decision, but I was definitely engaged in the small snippets of story I did come across and I am truly a sucker for puzzle based games as of late (The Pedestrian and Call of the Sea are two that pop to mind that I recently played and completed), so color me interested for when Valley of Shadow hits sometime in 2023. 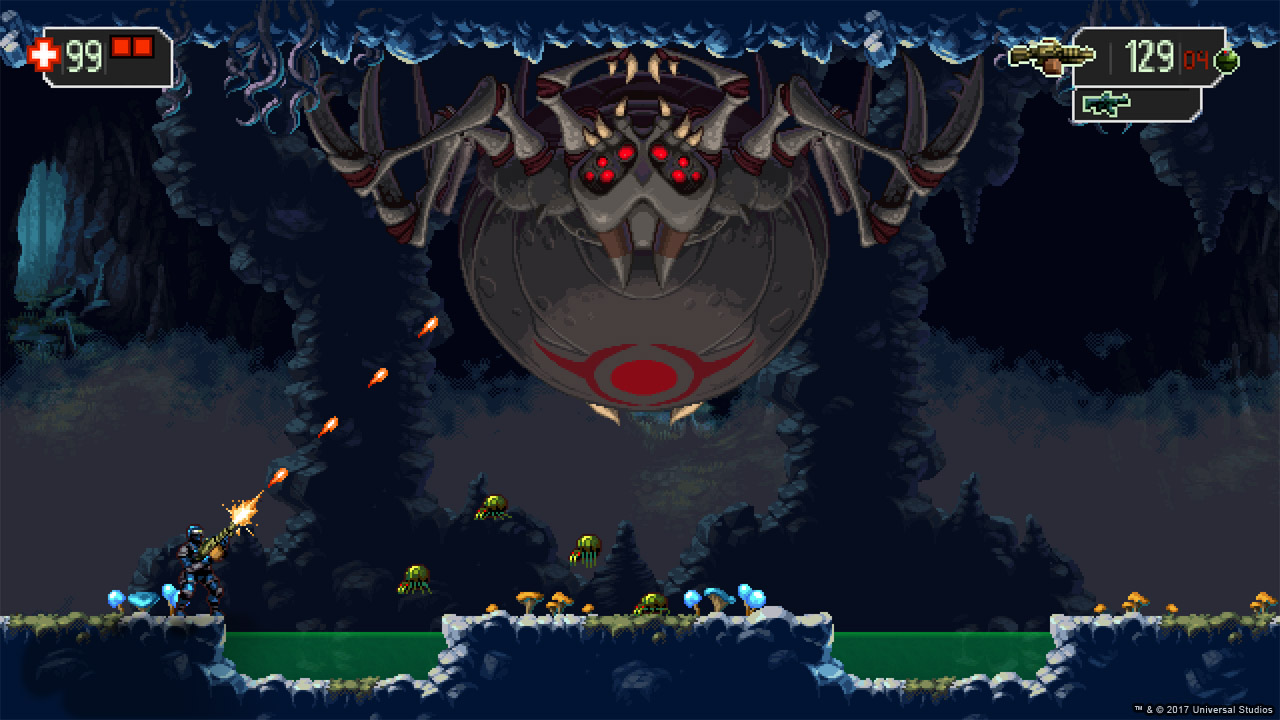 There I was, about to leave PAX East to begin my long trip home, when I came across the Limited Run booth. A staple in the gaming community as a company that releases various digital-only titles in proper physical form, complete with added material and bonuses for those willing to spend the extra few bucks, I had to check out what they had before I left. I noticed The Mummy: Demastered was available for purchase, and I was always intrigued by what I heard about this game. A sprite based side scroller shooter that was based on the failed 2017 Tom Cruise flick The Mummy (yes, THAT one) seems like a horrible game just waiting to be released/played, but reviews that came out around its release back in 2017 were surprisingly favorable, with most – if not all – saying that you shouldn’t write it off because it was a licensed game of a failed restart of a horror movie extended universe. I always wanted to get it, but never did. Seeing a physical copy at PAX, while also being usually loose with my wallet during conventions, I decided to pick a copy up for the Switch. Let me tell you folks, this game rules. A seriously awesome visual feast and intensely challenging 2D shooter with great mechanics, excellent enemy design and brutal boss battles all conspire to make this one of the best licensed games of all time. It’s really a shame it’s tied to the 2017 Mummy flick at all, as it would have probably been more accepted by the populous at large if it wasn’t. Doesn’t matter. This game is just fun as hell and worth every penny. Get a digital copy or shell out a few bucks more for that physical Limited Run edition (which came with a small snazzy artbook in the Switch version). You won’t be disappointed!