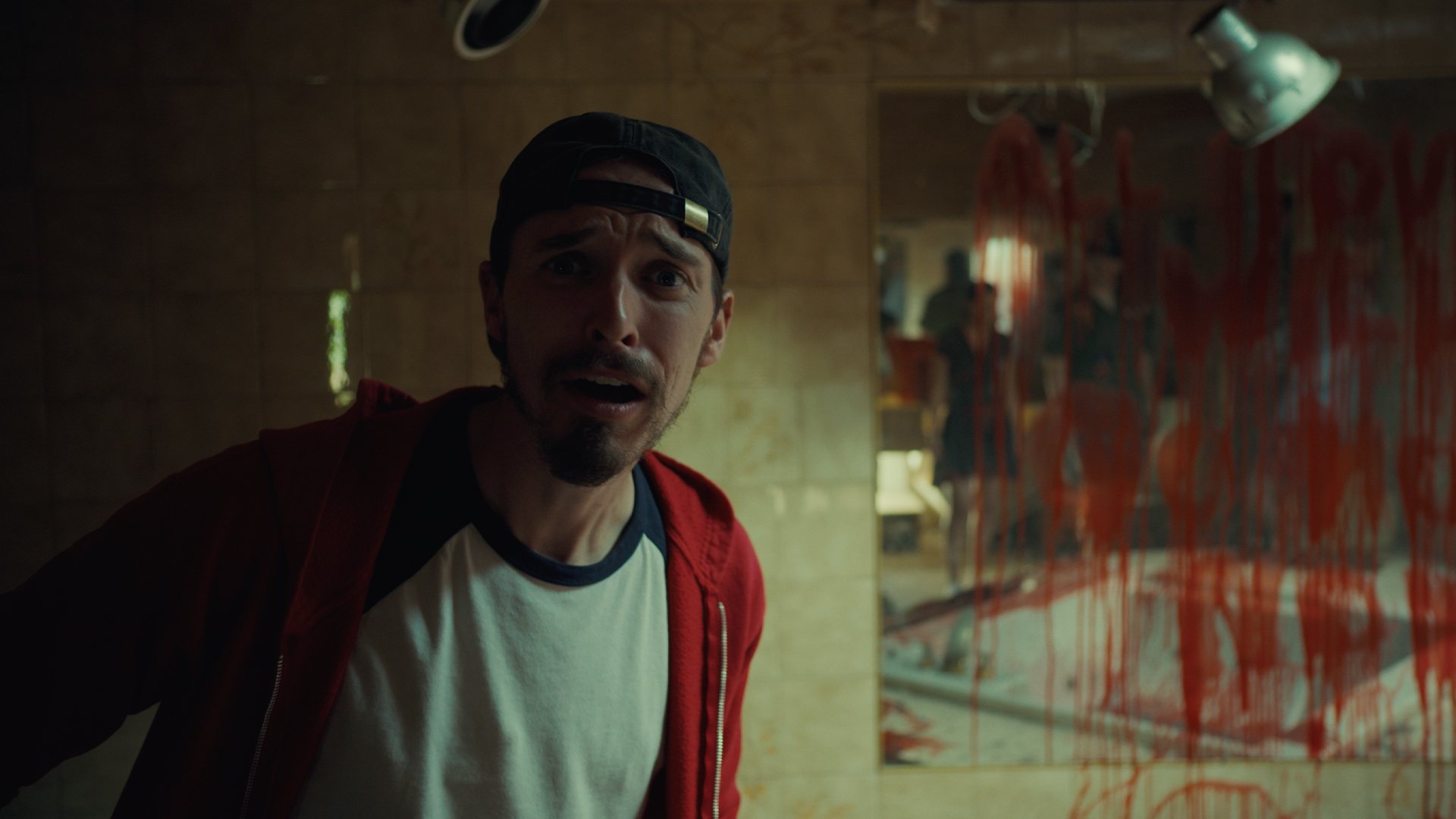 Mean Spirited tells the tale of Andy (Madden), an obnoxious YouTube ‘star’ who goes by the moniker The Amazing Andy and whose channel, Mean Spirited, focuses on Andy playing pranks on the people around him. Andy is an asshole. Viewers are introduced to him, and his sidekick/cameraman/prank victim Tom (Rashid) when Andy sits down to record a new video for his less-than-sizable YouTube following.

Andy and his friends have been invited to spend the weekend with their friend Bryce (Ryan), now the star of Thunderman, a parody of the CW Arrowverse with the main character being a speedster with a costume that is not dissimilar to Arrow’s costume in the early seasons, Bryce has climbed the ladder of fame while Andy toils away in obscurity. Making no effort to hide his jealousy and bitterness toward Bryce, Andy details the plan to make a “vlogumentary” over the weekend about the corruption of fame and how Bryce “sold his soul for a ticket to Hollywood.” 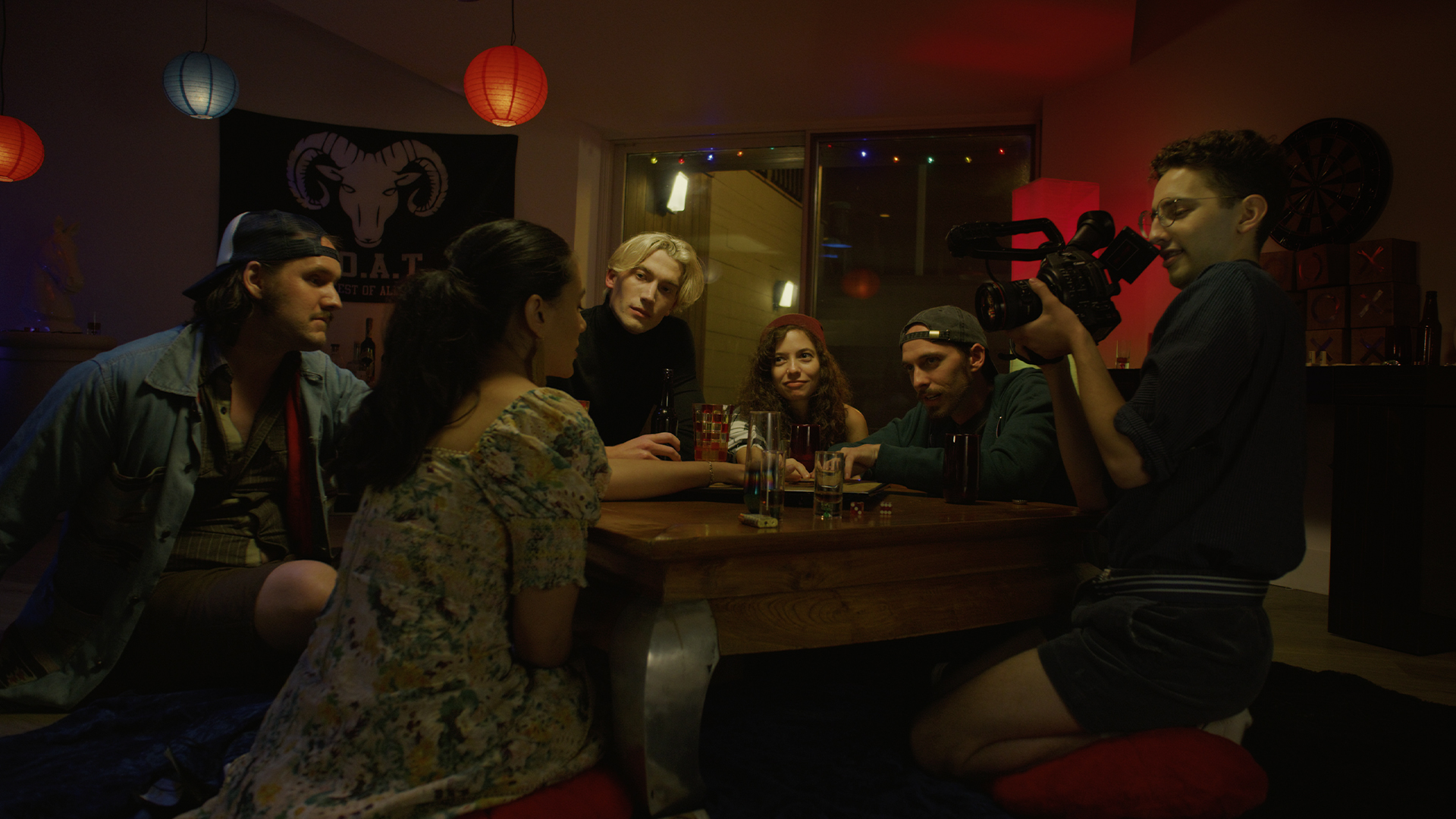 Joined by Tom and his girlfriend Nikki (Veintimilla), haunting obsessed Joey (DeCotis), and drunken party guy Dew (Martin) along for a weekend of debauchery, Andy heads to Bryce’s hidden away house with a van filled with camera equipment and a heart filled with spite for his former best friend.

Once the gang is reunited the tension between Andy and Bryce is palpable throughout the rest of the movie. The two genuinely seem to hate each other and take any opportunity to show it. Throughout the whole film, Andy hides behind the camera, even when in front of it, always staying in character and sometimes doing second takes on real things while attempting to stage others. So desperate for content, Andy will do anything for the perfect shot, even if it’s at the expense of his friends.

Of course, Mean Spirited isn’t just a film about the dissolution of friendships and the damage that harboring years’ worth of bile can do. It’s also about demonic possession! Within Bryce’s house is a locked door that occasionally emanates red light and nothing good ever comes from a room with an ominous red light shining through the cracks in the door.

As the weekend goes on, members of the group begin to act strangely, weird things begin to happen, and Andy begins to suspect that Bryce might not be the shiny superstar everyone thinks he is. The backstory to the pairs’ feud unfolds and the events of the weekend ramp up with bloody consequences. The message “Be careful what you wish for” is at the heart of Mean Spirited. Andy’s jealousy towards Bryce is keeping him trapped where he is and Bryce’s resentment of Andy has consumed him. All Andy wants is more viewers, more subscribers, more fame. It doesn’t matter whom he alienates along the road to stardom, as long as he gets there.

The story is a surprising take on mental health as well, using demonic possession as an allegory. In the third act, Bryce talks about his struggles with the voices in his head and his impulse control. The voices in his head may be demonic but the description brings to mind the struggles of many with mental health issues. Certainly not a theme expected in a movie about a terrible and egotistical YouTuber.

The third act packs in more blood and mayhem than the previous two-thirds of the film, and while the special effects are minimal they are still effective. Ryan pulls off a great manic performance once the truth of the situation is revealed, in fact, the entire cast puts in great performances with the standout being Rashid as former God-fearing Tom. Throughout, Madden’s turn as arrogant Andy is on point, echoing the familiar YouTube persona that so many on the platform put on.

Mean Spirited is a fun entry into the found footage genre with a surprising message about letting go of resentment and the pitfalls of fame. While it suffers from slight pacing issues and some subplots that I wish were fleshed out more (is the town cursed? What’s the deal with the haunted hotel? Was Bryce behind the murders there?) overall Mean Spirited is a solid solo debut from Ryan with great performances all around and a truly, and necessarily, unlikable protagonist in Andy.