What makes a movie punk rock? One could easily argue that punk movies are a specific genre onto themselves, but there’s no simple definition of what makes a punk movie. Is a punk movie simply a film with punk rockers in it? Does it need to have specific punk rock themes? Does a punk movie feature punk music or is it about the ethos and the ethic?

Of course, the answer is yes. Yes, a punk movie is all of these things. A punk movie can be about the punk attitude (Repo Man) or about a group of young punks (Suburbia) or a coming of age story of punks fighting against the forces of normality (SLC Punk) or a biopic of a punk rock icon (Sid & Nancy). Formats can range from documentary (Decline of Western Civilization) to comedy (Rock N Roll High School) to intense drama (Nothing Bad Can Happen). And even if it’s hard to define the elements of a punk movie on paper, there is an unexplainable something about a punk movie that sets it apart as something different.

So, let me now tell you a story. This story is about a group of outsiders who don’t fit in at their high school. They have a band, where they play music that’s not in line with what their peers are into. And, this story progresses through a series of events that pit these kids against bullies at school, corrupt and powerful people, and the authorities. Through unconventional means and a real DIY ethic the group of kids fight through trials, all the while kicking some major ass on guitar, bass, and drums.

This is Awreeoh, the band of misfit punk kids from our story above, the story that is the basis of the best film of 2015 (thus far), Dope. Malcolm (pictured center) is the story’s primary protagonist and is accompanied throughout the film by Jib (bass) and Diggy (drums), fellow outcasts and best buds. The trio is hype on 90’s hip hop, punk rock, and doing things their own way. The music feels equally influenced by hip hop, punk rock, reggae, and industrial rock, an obscure mix that certainly marches to the beat of it’s own (gay) drummer. But their sound and style isn’t all that sets them apart.

The friends are geeks. They get good grades, they don’t buy into the street lifestyle prevalent in their area, and they ultimately prove to find ways of accomplishing their goals that are very unique. Comprised of a dude wearing a Gumby, a lesbian gal who tends to prefer to dress like a boy, and the only Middle Eastern kid in a primarily black urban high school, even their very essence is different than that of their peers.

When a chain reaction involving a local drug dealer named Dom (played by rap superstar A$AP Rocky) leaves Malcolm and his friends in a predicament that forces them to live temporarily as hustlers, they use their DIY ethic and knowledge base to unconventionally dig out of the hole they are in. While the setting is urban and the story is about coming-of-age in the face of adversity, the tone of the film has that indescribable punk rock quality that puts in conversation with the punk movies of the 80s, 90s, and 2000s. Whereas punk classic Repo Man tells the story of the LA punks of the 80s through science fiction, angst, aggression, and humor; Dope uses a comedy of errors, modern technology, and poignant commentary on race and gender to tell the story of the modern urban punk, a punk who isn’t seen by most as a punk but is perhaps the most punk of all.

Dope is the best punk movie in at least a decade. It’s the best coming-of-age story to hit theaters in years. And, it’s an important film dealing with race, poverty, and the plight of urban people of color.

Go see Dope now and find out how appropriately named the film really is. 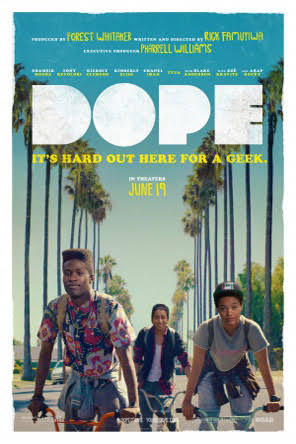