I feel like Herschell has now shown me his full bag of tricks, with a “splatter”, a “roughie”, a “southern”, and an amalgam of the three. He’s made slight progress as a filmmaker and storyteller throughout, but he’s yet to truly impress me. Further, he’s made what I would now call a habit of abusing the female characters in his movies, and seemingly only for my entertainment, and nothing more. Am I about to discover that I dove head-first into a hedonistic schlock-fest, or will the good-natured HGL that I keep meeting in the intro’s to each movie on Arrow Film’s Herschell Gordon Lewis Feast Box Set finally come into being and start directing these pictures?

Thankfully, with Color Me Blood Red, Herschell has finally made the movie I assumed I’d be sitting down to when I began this journey, and I can’t wait to tell you all about it. In his intro, he says he considers this the completion of his Blood Trilogy, which began with Blood Feast, and continued with Two Thousand Maniacs. With an honest-to-god good script finally in hand, a lead with some actual charisma and acting chops in Gordon Oas-Heim (credited as Don Joseph here), and a newfound understanding of exactly how and why his comedic sensibilities work, HGL seems to have finally come into his own here. This movie is unmistakably his, complete with seemingly important shots that are completely out-of-focus, and an often anachronistic soundtrack. But what used to feel like meandering in service of a few shocks feels like a deliberate attempt to shock while still entertaining here. The movie comfortably moves from real character development to shocking twists and back, all at a perfectly brisk pace. And while his usual inclusion of off-the-wall characters and bizarre set-pieces that seem more fueled by what’s available at his shooting locations than any story need are still present, they’re rendered with a winking sense of humor that adds to the midnight movie appeal of this, rather than detracting from the proceedings by feeling like a waste of screen time.

With the vague positivity out of the way, let’s dive into the story and what really grabbed me about this. On its premise alone, Color Me Blood Red is Herschell’s best movie I’ve seen thus far by a long shot. An up-and-coming painter, Adam Sorg, becomes obsessed with finding the perfect tone of red, which he simply cannot achieve through the various paints available to him. Upon discovering his girlfriend’s blood is exactly the shade of red he’s looking for, and fueled by the demoralizing commercialization of his work and the critique that follows it, Sorg begins a killing-spree that will fuel his true masterwork. If you’re not already looking this movie up to see where you can stream it, you shouldn’t be reading this series, because fuck that’s a great premise!

Oas-Heim gives Sorg a manic energy that is recognizable if you’ve ever known someone willing to call themselves a “true artist” aloud in front of a room of strangers. He’s so aware of this archetype he’s able to imbue his performance with a knowing comedic tone that never betrays the tension of the story. And there is finally some true tension here, as HGL teases Sorg’s deepening madness out over the course of the first act, finally resulting the murder of his girlfriend, whose bloody face Sorg then uses as a brush to finish a painting. It’s a grim and grisly joke of an image, the perfect encapsulation of what I had hoped for when I learned of Lewis’ nickname, “The Godfather of Gore.” He finally lives up to that with Color Me Blood Red.

And then he just starts outdoing himself. In the second act there’s an amazingly hilarious murder involving a paddle boat chase. You did not read that wrong. When two young lovers arrive at what they think is an abandoned beach house but is actually Sorg’s studio, they steal Sorg’s paddle boats for a little fun on the water. Sorg doesn’t really care that they took his boats, but he does need more blood for his next painting. This results in Sorg using a motorboat and a harpoon as if he’s a Knight atop a horse with a lance and “jousts” one of the young lovers to their death. He then kidnaps the other and is later revealed to have strung her up on a wall in his house and opened her stomach up so he can extract blood from her bowels, as if milking a cow. The gore here is far more effective than it’s ever been in previous HGL movies, and not just because of the insane context. He and his crew have clearly learned a lot about gore effects by this point and put all of their knowledge and skill on screen in this scene – it’s easily one of my favorite scenes in his filmography thus far. 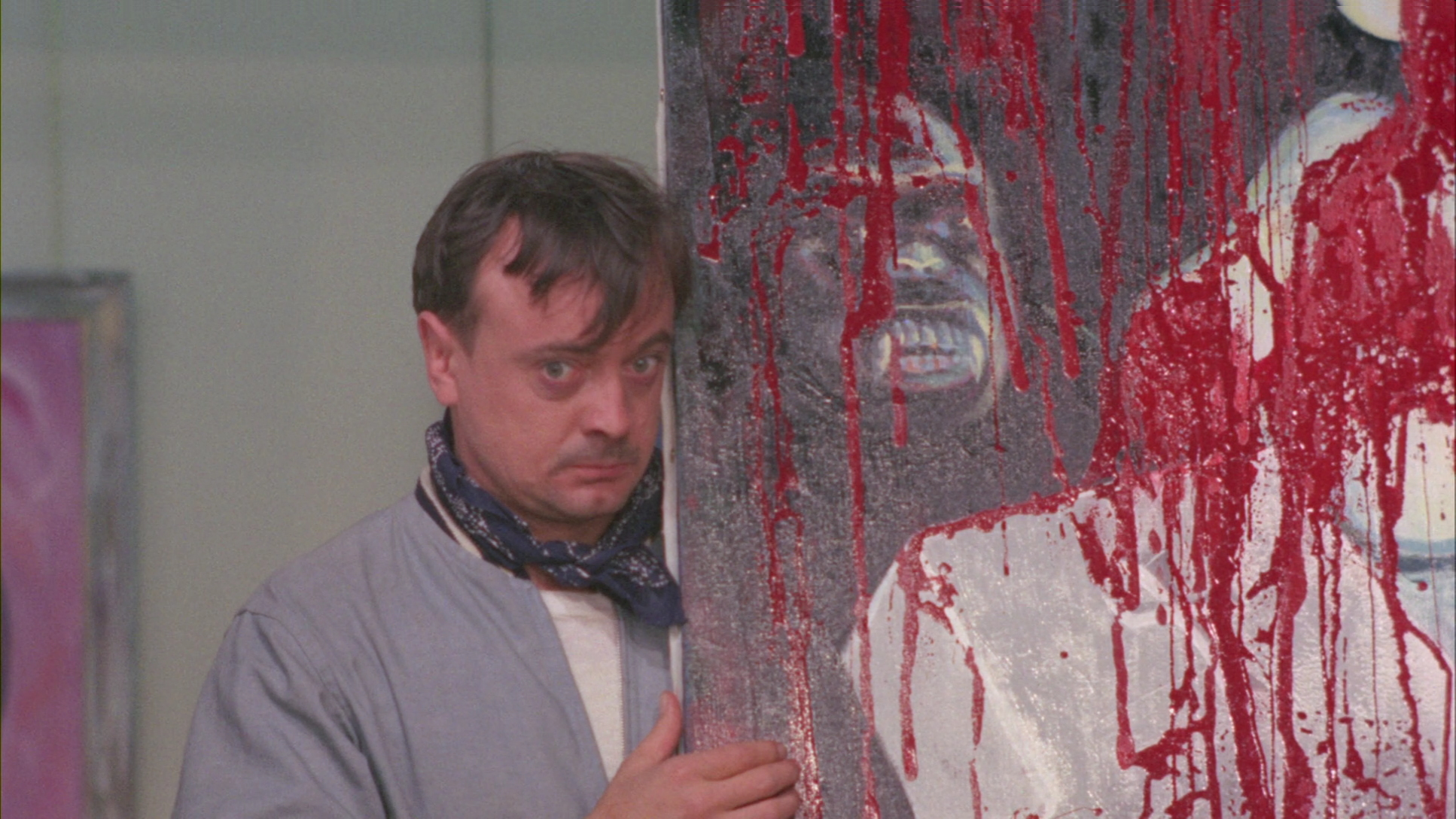 One of the bold, but perfectly Herschell choices that is made here is to score most of the film with a bopping jazz soundtrack. While that sounds like it would be out of place in a movie with this gonzo premise, it perfectly brings us into the mind of Sorg. Early in the film, before deciding murder is the best way to acquire the “paint” he needs, he attempts to extract enough blood to complete a painting from his own body. This results in his passing out from blood loss before he can complete it, but throughout this insane moment of opening up his own veins we’re treated to an excellent jazz track that has the same manic energy Sorg is displaying. It works wonderfully for the film, and is only disappointing in as much as I can’t find any info on what tracks were used for the film, and I would greatly like to appreciate them on their own.

Another staple of HGL’s filmography is here as well – a couple of complete odd-ball characters meant to bring a comedic touch to the proceedings are teased as potential future victims throughout. They’re a young couple that dresses in identical costumes, complete with goofy wigs and funny glasses, everywhere they go, and are constantly “performing” in some way. It’s unclear if they’re theater kids, or circus performers, or really what any of their motivation for their performative nature is, but for the first time in an HGL movie, they’re successfully funny throughout. He gives them great one-liners, like when they discover the body of Sorg’s girlfriend buried on the beach outside Sorg’s home: “Holy bananas! A girl’s leg!” and “Dig that crazy driftwood.” In fact, the movie is full of fantastic little snippets of dialogue, showing a huge leap forward in Lewis’ writing. An example, and a particular standout, is when Sorg’s girlfriend discovers him passed out from the self-inflicted bloodletting and tells him “There’s just one problem with painting like that – the Undertaker has to finish it for you.” The whole film is populated with great bits of dialogue like this; the kinds of lines I want to hear in a crowded theater where people can cheer and snicker.

In its finale, Color Me Blood Red builds to a fantastic image that makes the whole thing come full circle. Sorg manages to convince a young woman to model for him, and a nearly slapstick scene ensues where he attempts to tie her up and axe her in the back, all without her realizing this is happening to her. But instead of torturing her for our (the audience’s) pleasure as HGL normally would do, her boyfriend shows up in the knick of time and puts an end to Sorg’s terror by putting a round of buckshot in his face via shotgun. This results in Sorg falling face first onto a blank canvas, recalling the earlier image of him using his own girlfriend’s face to complete a painting. It was here, in a brilliant twist of fate for the characters, that I knew I had finally fallen into Herschell’s trance. Every moment of this movie worked for me – I went from a curious movie fan that was trying to grasp what it was people love about HGL’s work, to an unabashed Godson of Gore. I’ve been exploring his work for the better part of two months now, trying to prove that Splatter Matters – but I was going about it all wrong. Herschell proves that Splatter Matters all on his own by delivering a perfect entertainment that only works as well as it does because of its splatterific premise and the commitment of every artist involved to creating a heightened reality that we can buy into. Were it not for the splatter, this would be a hollow rumination on madness that could only exist in the movies. Instead, it revels in real madness, motivated by jealousy and inadequacy, that results in the kind of grisly reality the news is constantly reminding us we live in. The splatter elevates what we’d like to pretend couldn’t happen in our happy, suburban homes into something all too real and horrific, and yet allows for it remain entertaining. 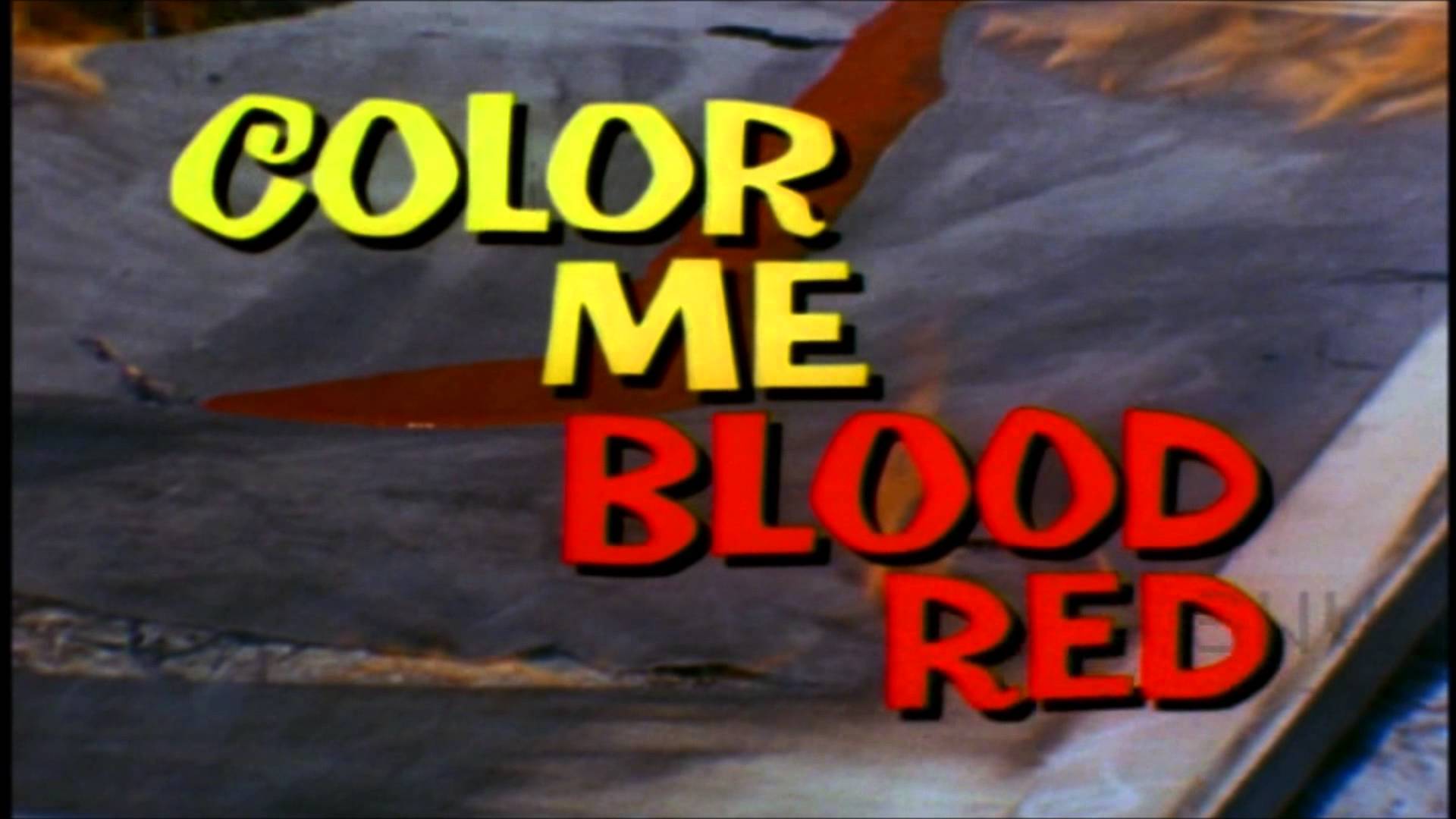 By god Herschell, you’ve done it. In completing your Blood Trilogy, you not only made perhaps the only good “third” in a trilogy, but you finally sold me on my own premise – that Splatter Matters. And not just because it’s subversive or weird, earning the kind of “cool” cache that b-movie lovers like myself tend to give that kind of thing. But because it extrapolates on our very real fears of pain and violence in and of themselves, resulting in a level of uncomfortable surreality that enables horror to be both scary and fun at the same time. That fine line should allow for some meaningful exploration of things like madness, suffering, and the unknown, should Herschell decide to go that route. Here’s hoping that’s a level you eventually get to my wild-eyed friend, as we continue this journey to prove that Splatter does indeed Matter.