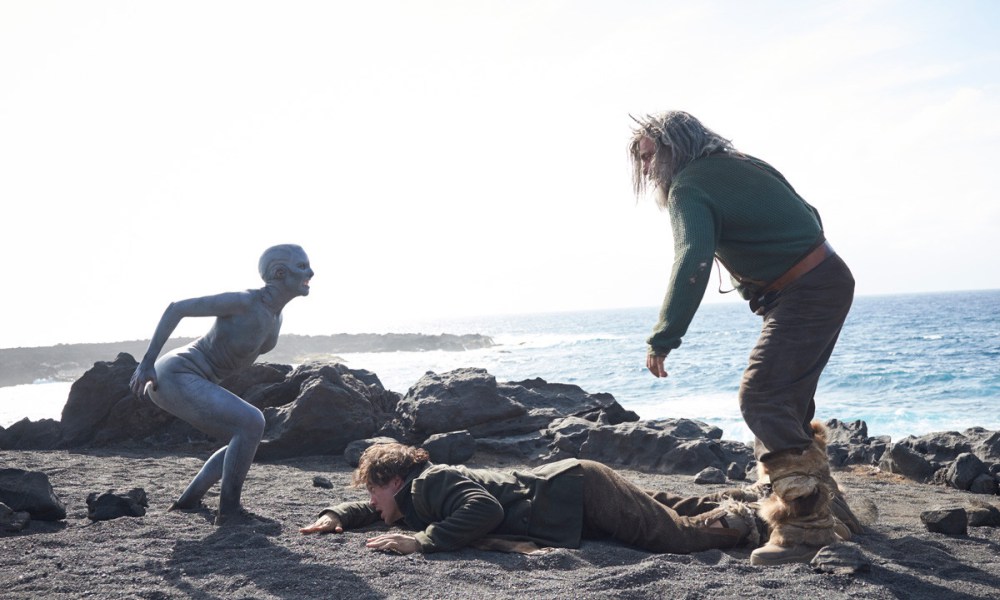 I don’t think there is a more off-putting way to begin a film than with a quote from Nietzsche. Especially when that quote is about the abyss and it looking back at you. This is how Xavier Gens decided to start his newest movie, Cold Skin, and I have to admit that I was already docking points within the first thirty seconds. Once I got past the opening credits it slowly started to grow on me, like mold or algae. The movie opens to rich scenes of ships traversing the sea and hard men looking at each other. Everyone was mumbling, but Cold Skin was winning me back… little by little. As much as I was turned off by the stupid quote, I was finding myself completely enraptured by this strange adventure story that was as grim as it was beautiful.

The film is about a nameless man who is left at a small island in the Antarctic circle to study weather patterns in the region. The only other soul around is a hermit who is staying in a nearby lighthouse. The nameless man goes about his quiet life of study, until he is forced to team up with the hermit to fight an army of (humanoid) sea creatures.

I am sure that the description reads as a much pulpier film than what we actually get. What should be a tale of swashbuckling fun, turns into a nightmare of repetition and dread. These two men must fight (what seems like) every night against these beasts and there is a stark line of commentary attached to this repetition. There is no denying that Cold Skin is discussing colonization and the violence that it causes, but Xens manages to make it feel fresh and meaningful. You see the wear on these men’s souls and its hard not to feel a certain level of pity. This detail is also lent to the monsters, as well. What starts as just faceless hordes of savages, transforms into what is clearly an established culture. What also helps is the amazing effects used for the creatures. The beasts are given emotional range that makes those scenes of mass killing even more effective.

Where this film does lack is in its pacing. The second act begins to drag and starts to feel like a chore. Removing five or ten minutes of the monotony of these men’s lives could have helped raise this film from good to great! If you have seen any of Xavier Gens’ other films, then you may know what to expect, but I guarantee that no one could have predicted how beautiful this dreary film could look. He takes full advantage of the locations and lingers on shots just long enough for the viewer to get lost in the natural harshness and beauty of this strange part of the world. I may not love everything about this movie, but I truly respect the precision and scope of what the cast and crew are striving for. Hopefully we will see a release date soon, so you all can share in this films gorgeous take on misery.