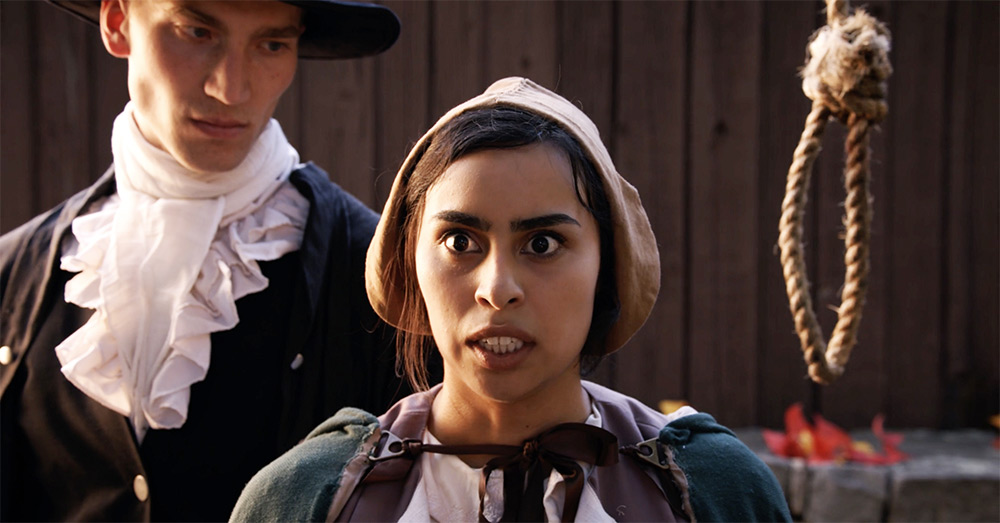 Two years ago, I watched a film that felt like it was literally made for me (and people like me) called Youth Min. Little did I know when I was sent a Halloween film from The Horror Collective that I was watching the follow up from the directors Arielle Cimino and Jeff Ryan. Moreover, I was even more surprised to see a college friend of mine playing a townie in a beer costume. These were very pleasant surprises.

Their quirky style was still on display, but this time moving in the direction of a unique horror film rather than a satirical mockumentary. Unlike any other horror film I watched this Halloween season, Mass Hysteria has a singular feel and an idiosyncratic style that is wholly its own.

The plot is pretty straightforward…

A group of Salem witch trial reenactors find themselves at the center of a modern day witch hunt.

However, the unique tone and pacing are anything but. A totally normal Halloween, complete with crappy Salem tourists and the annual trial reenactments, seems to be underway until a weird happenstance scares the townsfolk and tourists into believing that a member of the reenactment cast is an actual witch. At this moment, shit gets really weird and the cast has to escape an angry mob who wants to kill them… or at least kill “the witch”.

This story is entertaining in and of itself, but it’s the oddball characters, quirky dialog, and comic timing that make the tone so singular. It blends laughs and scares with a heavy dose of awkwardness in a way that seems to highlight a similar sensibility to their previous film. While the previous film vibed on a much more cellular level for me as a pastor’s kid who was heavily involved int he world of youth ministry, some of the actual filmmaking techniques employed in this follow up film show growth from the filmmakers, even if their ambition is sometimes hampered by the evident low budget.

If you’re in that Halloween spirit, even if the holiday has passed before you are reading this, this is well worth your watch. Don’t expect big Hollywood-style effects, but do expect something different than the same ole same ole.