In continuing the celebration of some of our favorite roles of Philip Seymour Hoffman, I was asked to repeat this: “Her life is in your hands.”

One of the best comedies in American cinema history, a film that once held the record for most uses of the fuck word, and a lesson in preferred nomenclature, The Big Lebowski would be much less a brilliant film without Mr. Lebowski’s personal assistant, Brandt. 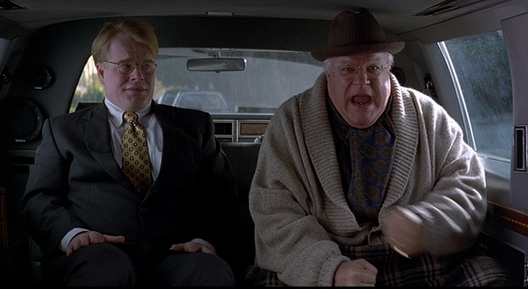 Brandt is a requisite straight man who is socially awkward, well dressed, and kisses his boss’s ass like a young Republican meeting George W. Bush at a GOP convention. Hoffman’s on screen pairings with Jeff Bridges as “The Dude” and his boss, played by David Huddleston, are perfect. And, while Hoffman is not on screen for a significant portion of the story, his scenes are not only necessary, but also add a nice balance to the film.

It’s true that Hoffman’s performance in Lebowski is not necessarily one of his top 5, or even 10, in terms of depth and screen time, but I’d be remiss if a recap of Hoffman’s performances and the great films he has been a part of did not include a film like this Coen Brothers’ classic.