Hey everyone, this interview with the impeccable Philly rockers AVOGT was from before the unplanned but much needed month break that we took here at The Farsighted… but it’s something you should check out, because these dudes are pretty great.

Hey guys, why don’t we start with a brief introduction to A Victim of Good Times and what you guys are all about.

We’re a 4 piece from the Philly area. We just dig on rock music, anything guitar driven really.

Thanks. For a musical standpoint, how would you describe your sound? Who are some of your big influences?

Our sound is definitely guitar driven. We love fuzz. A lot of people say we’re like a 90’s throwback band although that’s not on purpose. I guess it’s just because of our influences. I dig on stuff like Dinosaur Jr. and Misfits. I grew up on punk where Clay is more into bands like Rush and Band of Skulls. Dan’s all about Jawbreaker and Polvo type stuff… and Mike is in to any music that is completely out of bounds haha, you really can’t tie down what he likes because any time one of us asks he always says “Stuff you guys wouldn’t be in to..” I know he likes Pinback, though. 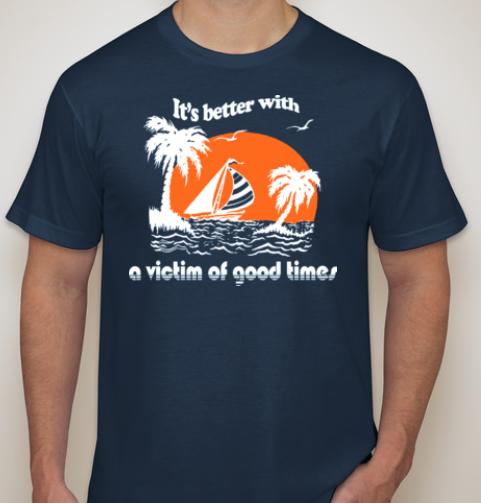 You’re from the Philly area, like me. A few of my favorite venues are The Fire and The Troc in the city and Bethlehem SteelStacks up the Turnpike from the city. What are some of your faves?

Favorite Philly venues are Kung Fu Necktie and The Fire. Our favorite place to play a show was Mojo Main in DE. That place was off the hook but it shut down… bummer. Favorite place to see a show in Philly, for me at least, is Union Transfer. That place just got it so right.

Tell us a bit about your latest album, The Full Catastrophe.

Hmm.. well that album took a lot to get where it got. We went through drummers and auditioning guitar players and lots of other road blocks when trying to get the songs where they are on the album. When this band first started, Clay and Dan weren’t in it. We were a three piece. Some of the songs started there and then grew to what they are now because of Clay and Dan’s contributions, the others were written with the full line up. The Full Catastrophe is definitely a music person’s album. Although I do think Lighter Shade of Blue and Loyalton could be singles, any song on that album is digestible for a music lover. I can’t speak for everyone but I really do think we went into this with no hopes of creating the next hit song. We wanted to craft an album that was meant to be listened to the whole way through, even the order of the songs was a big deal that took a few meetings to finally settle on. In my opinion it’s the soundtrack for a summer night that has ups and downs while you move along on your adventure… the Full Catastrophe of living.. the good and the bad. I won’t get into too much detail because I like people to make lyrical parallels to their own life experiences but the album as a whole covers the human experience from the perspective of regular guys. Also, the album wouldn’t be what it is if it weren’t for Mike Bardzik. He recorded/engineered the album at his studio Noisy Little Critter. Working with him was a dream. He had a lot of influence on the final product. Shout out to Mike!

So, one of the topics I like to tackled on this website is the intersection of faith and art, namely the idea that one’s personal beliefs and how it is related to the art they create. Do you mind talking to us a bit about your thoughts on faith and spirituality?

This is a tough one because we definitely like to keep our personal beliefs about pretty much anything close to the chest… I guess I’ll say that I’m trying to be more open minded every day and learn more about life. I went through a really bad time in my life, well what I considered bad I suppose, and as a result I had to take a new perspective on life in general. I now meditate every day and strive to be as present as possible. It’s tough but worth doing in my opinion. As far as Clay, Dan and Mike are concerned, I really couldn’t say because we don’t ever talk about this kind of stuff. If I could be so bold I would say that Dan is probably the most practical/rational person in the band, Clay has a big heart, almost as big as his gear collection, and Mike is completely selfless. I know that doesn’t really answer the faith or spirituality question but I think it touches on what everyone’s personal beliefs could be.

Do you think that these beliefs are reflected in your art?

We like I said, I strive to be present in every moment of life and what could be more present than writing about what you’re feeling? When we play music together it’s the best way to be totally in the moment because you’re crafting it in real time so I definitely think that the guys would agree that the finished product is whatever we were feeling or believing at the time… we were lucky enough to capture that on record… which is super rad.

Thanks for having this discussion with us. It’s something that we and our readers enjoy engaging in discussion about. Moving forward, tell us what some of your non-music hobbies and interests are.

For me, reading is probably my biggest hobby… reading and staying physically active. Clay and I are both big vinyl collectors although his collection dwarfs mine. Clay also makes a hell of a cocktail. Not sure what Dan is into but I could see him flying kites and doing macaroni pictures… or ballet. Mike is into design and like I said before, he did that puppet movie so I would think that was a big hobby of his.

If I asked you for your top album and top film so far in 2014, what would they be?

Hmm… I just recently picked up Gnarwolves record which is pretty rad. Also looking forward to hearing what Cardinal Arms is coming out with. Clay just ordered us a copy of Ted Nguyen’s (Philly Band) new album. Pretty stoked to hear that. But if I had to pick a top album of 2014, right now I’d say Freddie Gibbs and Madlib’s album Pinata. I know Dan’s pumped for Bob Mould’s new album and Mike saw Weird Al a few months ago!

I don’t really see a lot of movies but I did recently see a film called Safety Not Guaranteed and loved it. Not sure if it came out in 2014, but that would be mine. Not sure about the other guys, but I will say that Clay will tell you that Game of Thrones the show is butchering the books though Dan digs the show.

For Mike, his favorite movie is probably the one he wrote, directed and starred in. No lie, him and his brother created a film called Brownsville… it’s a puppet movie and the only way I could describe it would be: “super fucked up”.

Awesome, well thanks again for taking some time out with us. Before we wrap, tell our readers where they can catch you, both live and on the Interwebs…

Yeah man, thanks for taking an interest in us. We really appreciate it. Our website is www.avictimofgoodtimes.com, we’re on Facebook and we also have a bandcamp site where you can download all of our music for free… avictimofgoodtimes.bandcamp.com.

Be excellent to each other.