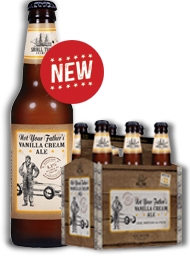 Small Town Brewery has hit it out of the ballpark with their “Not Your Father’s” line of hard Sodas. These are gruit (German for herbs) inspired ales meaning they are bittered with roots, spices, flowers, and berries during the brewing process. So far they’ve produced these delicious treats: Root Beer, Ginger Ale (my favorite), and the newest flavor – Vanilla Cream Ale.

I picked up the Vanilla Cream Ale at my favorite little beer stop, LD’s Beer Run, in Jackson, MS. I have to say it completely exceeded my expectations. The second you pop the top off you smell an exotic wave of vanilla, and I do mean exotic – Not Your Father’s Vanilla Cream Ale is brewed with Madagascar vanilla. The taste is smooth and extremely drinkable. Beware though, it is a stout creamy ale not meant to drink in large quantities or on an empty stomach unless you are intending to court a stomach ache.