A Time for Heroes

Despite having died 900 years ago, Rodrigo Diaz de Vivar’s story (as told via 1961’s El Cid) somehow feels remarkably relevant to 2017. Sir Rodrigo is subject to Alfonso IV – the corrupt, bronze-faced king of Catholic Spain (which happens to be threatened by an outside, radicalized Islamic army). Alfonso, in his ignorance, projects his paranoia as disgust toward his own Muslim locals – accusing each of being no better than their conniving co-worshippers.

As I write this in December 2016, with Trump’s threat of a registry still ringing in our ears, our bronze-faced King-Elect is still damning his Muslim subjects. And yet, tragically, Muslims are far from the first culture that this country has censured.

When El Cid debuted in December 1961, many African-Americans were literally still fighting to survive. Earlier, in May, the Congress of Racial Equality’s first twelve Freedom Riders trekked from Washington DC toward New Orleans in a Greyhound and Trailways bus. Upon reaching Anniston, Alabama, rioters firebombed the Greyhound. In Birmingham, whites beat the Trailway riders with baseball bats, lead pipes, and bike chains. All due to desegregated seating. It would be two years until Martin Luther King Jr. took Washington. Four years until Congress passed the Voting Rights Act. For years, the fight for Civil Rights would remain a blood-soaked, uphill slog. But hope was coming.

On-screen, Charlton Heston’s de Vivar calls out King Alfonso’s bigotry. He admires the Moors’ culture and requests their council -even going so far as to adopt their respected nickname for him, ‘El Cid’ (or, ‘The Master’). Simultaneously, as El Cid shot, Heston was finding it increasingly impossible not to draw his own sword in the Civil Rights fight. According to Heston, in an August 28th, 1963 taping of Hollywood Roundtable, “Like most Americans, I expressed my support of Civil Rights at cocktail parties.” After successfully cutting his teeth co-negotiating the 1960 Actors Strike, Heston was hungry for a cause. Late that year, as El Cid shot in Spain, Heston’s friend Louis ‘Jolly’ West (then, the Head of the University of Oklahoma’s Department Psychiatry), appeared in the International Herald-Tribune after “inappropriately” protesting in favor of Civil Rights. Seeing this, Heston sent to West asking how he could help. Three days after Heston returned to the States, West replied.

“How would you like to …raise a little hell with me?” Heston recalls West asking in his autobiography, In the Arena. In Spain, Heston (as El Cid) had demanded that respect be shown to his darker-skinned kinsmen for Anthony Mann’s camera. Now, with West, Heston would condemn Oklahoma City’s segregation by marching before crowds and national news cameras. Like El Cid’s King Alfonso, neither MGM or Allied Artists (Ben-Hur and El Cid’s distributors) approved. Each asked Heston to reconsider the possibility of alienating their pictures’ more politically passive audiences. “Come on, guys,” Heston is said to have replied. “El Cid isn’t going to be in theaters for another six months. Ben-Hur’s been playing since 1959; everyone’s seen it already. Are you telling me people won’t go back for a second look because I picket a couple of restaurants?” 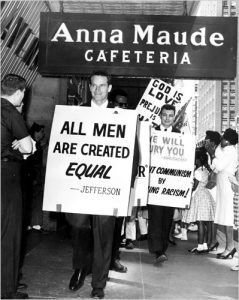 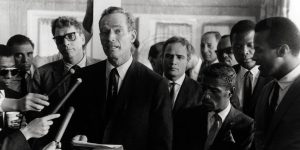 But race relations wasn’t the only death-defying topic that El Cid was tapping into at that time. Heston’s Rodrigo de Vivar is also a conscientious objector. At three different times, El Cid defies his King’s ego-driven orders:

Because of El Cid’s convictions, Spain is saved, his family is freed, and Alfonso atones for his villainy. 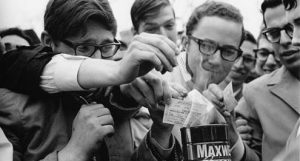 By fate, El Cid’s case for conscientious objection is perfectly, even eerily, timed. On December 11th, 1961 – only three days prior to El Cid’s U.S. premiere – History watched as two evil-adjacent world events occurred. One was the USS Core’s arrival at Ho Chi Minh City’s Saigon Port – an act that officially entered the U.S. into the Vietnam War. Simultaneously, in Israel, Nazi Lt. Col. Adolf Eichmann was declared guilty for faithfully heeding Hitler’s genocidal agenda. Each event bookends individual eras in which conscientious objectivism was required -one case more successful than the last. The USS Core’s actions would eventually lead to conscientious objectivism becoming a household concept. Eichmann’s actions, on the other hand, echo what can occur when too few citizens refuse to be ruled by tyranny.

In two weeks, Donald Trump, like Alfonso IV, will swear publicly upon Scripture that he will run his country righteously. Like El Cid, let us fight to keep his kingdom accountable.