I’ve been to California twice. Once to be on a film program with The American Pavilion, and the second time was to visit some of my best friends. Both of my visits were to Los Angeles where I got a decent grasp of the city, its people, and the way some things work. I personally find Los Angeles absolutely fascinating. There’s so much to do, so much to see, and so many different individuals living there. I haven’t experienced a bus trip on LA, but I’d like to think it goes a little something like the trip in From Hollywood to Rose.

Eve Annenberg’s character, whose name is never revealed, hops on a bus in an over the top wedding dress with a destination unknown. As time passes, she meets other characters as they hop on the bus through the late hours of the night.

My favorite section of the film comes when she meets two men who are infatuated with movies. Right after a dispute about whether Christopher Nolan is a good director or not, the two men include Eve in on their conversation. Quickly after that they become friends with even one of the characters showing quite the interest in the woman. They hop off the bus, get late night burritos and tacos, walk around town, and discuss why the wedding dress. So what’s with the dress? One would quickly assume that she’s running away from a wedding, and that is the actual truth. Cold feet got the best of the woman, and she high tailed it out of the wedding.

Through her expedition of traveling, with each peculiar individual this woman meets, she learns more about herself and questions what is going on personally with her. Why am I doing this? What is my life currently? We’ve all had these questions and more and have had to figure them out on our own. You never know who you’re going to meet who will help you out in the long run. 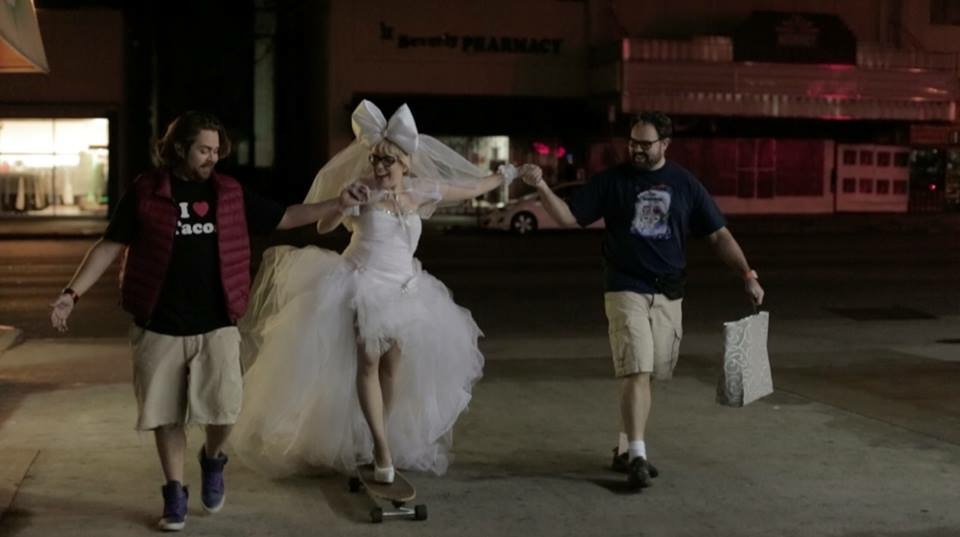 This film felt like a game of Candy Land with meeting new people at each stop. You can’t help be find one of these characters relatable. For me it was the two men arguing about graphic novel movies, Christopher Nolan, and Tim Burton. I laughed so ridiculously hard at that scene and I can’t forget that for awhile.

From Hollywood to Rose was a really cute film. It started out extremely strong and even though it faltered towards the end, it was funny and endearing. This film won Best Comedy Film at the Hollywood Reel Independent Film Festival and Best Comedic Screenplay at the Manhattan Film Festival and it truly deserves it. I had so much fun with this.

From Hollywood to Rose will open in Los Angeles at the Laemmle Music Hall on June 16th for a weeklong run.