As this is the first post in a new series, let me begin with a brief introduction. You see, I’m a suburban white ass honkey. I grew up in a quiet and safe suburban town that I eventually realized in my teenage years was rife with racial profiling. It was an honest to God Mafia town, which equated to a very safe, very white, and very Catholic place. While I was indeed white, I felt a bit different because over half of my friends were Italian Catholic and almost all of the the remaining folks were still either Italian or Catholic. As the son of a Baptist pastor whose ancestry included a variety of WASP nationalities, I was a bit different… but not as different as the 10 or so black families in town and the 5-10 percent of the town’s population that had Asian or Indian lineage.

I bring this up in my introduction to just show how despite growing up in a very diverse region of the country, just outside NYC, my little town was a weird little bubble to grow up in. While I’ve grown up to find the Mafia an interesting study, I still find myself able to shrug them off as it was so commonplace where I lived to just know that my friend’s parents and relatives were connected in some way. Hell, to this day, I know there are people I could call to find my in… not that I’d ever want it. Yet, the crime elements in films like The Black Godfather, Dolemite, and other blaxploitation classics always fascinated me in a different way. The urban centered films about black organized crime always felt liek something different and the urban culture always was intriguing.

So, fast forward to today, where I once again live in a pretty white town and an even less diverse area on the whole. Though, I work in and around Philadelphia, so diversity is something that is part of my everyday life. For this, I’m thankful. Yet, I’m more fascinated than ever with urban culture, blaxploitation films, and traditional African America entertainment. I’m hoping that through this journey of blaxploitation films, hip hop, and other entertainment that is typically marketed towards African American consumers that I will be able to further understand this fascination, which could be as simple as a desire to learn more about “the other” or something much deeper. Either way, I appreciate that you are along for the ride and I know that I’ll, at the very least, expose some of you to great art you may have never heard about before. 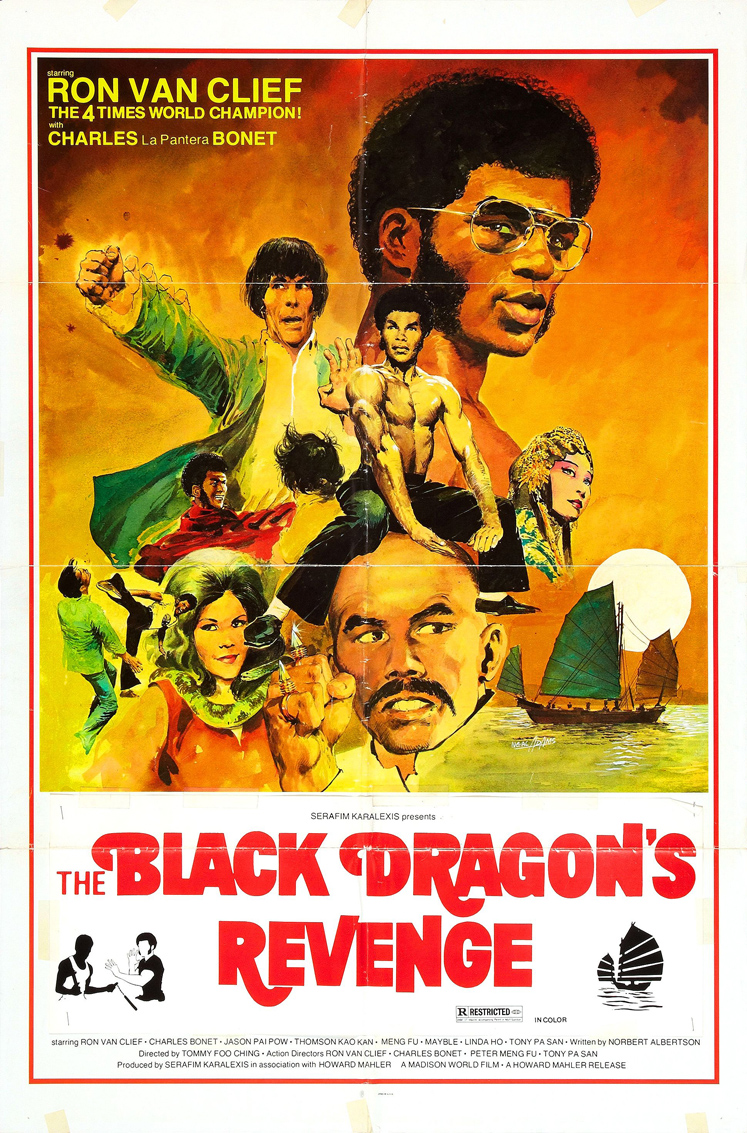 And with this, I present to you the asskicking Ron Van Clief, a killer kung fu champion who became known as “The Black Dragon”. The Black Dragon’s Revenge (aka The Black Dragon Revenges the Death of Bruce Lee) is a 1975 film starring Van Clief as his Black Dragon persona. Given the nickname from The Dragon, Bruce Lee himself, Van Clief is the real deal. His attitude, his moves, and his on-screen charisma are all top-notch… and, in this film, they are all on full display.

The film focuses on the mythos and legend of Bruce Lee, specifically in reference to his finger fighting techniques. Three rival gangs are all in search of a handwritten guide written by Lee before his untimely death. Of course, these searches all lead down similar paths that cause the gangs to collide in kung fu action, with The Black Dragon at the center of the best of it.

Unlike much of the work considered blaxploitation, this takes those tropes in a different directions. Crooked cops aren’t the focus here, as Van Clief is partnered with Charles Bonet (“The Puerto Rican Terror”) to find out the true cause of Bruce Lee’s death. The film plays more as a kung fu flick with some blaxploitation tropes intertwined. Yet, the star and the badass is The Black Dragon, which brings the discussion back to the discussion of black culture and blaxploitation.

The film wouldn’t be the same without Van Clief as the lead. He brings the charisma of a Rudy Ray Moore, the imposing nature of Toshiro Mifune, and the martial arts legitimacy of anyone short of The Dragon. Van Clief is a real kung fu master with some real on screen chops, not to mention some decent comedic timing. It’s hard to watch him on screen and not wish he’d landed some of the biggest roles in the Hong Kong kung fu and US blaxploitation worlds. To be as imposing and fierce as he is at only 5’9″ is impressive. The man who gave him his nickname, the greatest on screen martial artist of all time, was only 5’7″ and was always a larger than life destructive force, too; thus, it’s not hard to understand why the nickname was given to Van Clief at all. Nonetheless, it is he who makes this film what it is.

An interesting place to start with this column, it is worth considering what this film means to my central idea of this column. While I expect to draw in many things about myself and what I believe with other films covered in this column, like how racist white cops are evil in a ton of these films, this film really just draws me in because The Black Dragon is cool. He is charismatic, witty, and badass. What more do I need to be drawn in? I want to be just like him because… well… don’t we all?

The Film Detective released the film a few months ago with a stellar transfer and some clever work on the film’s audio cuts on Bruce Lee’s name (the filmmakers feared lawsuit from Lee’s estate). You can, and should, grab a copy at your favorite retailer and begin this “Blax Like Me” journey in style!