[Editor’s Note: In October, Friday Fight becomes Friday Frights and we’ll be covering something every Friday this month. Next week we’ll be celebrating the life of the late George Kennedy with a lesser known 1988 horror film called Uninvited. It’s streaming on Amazon Prime.]

I don’t understand how this star-studded flick flew so far under my radar, but it suddenly emerged on Netflix, hopping into my ever-growing list. I put off watching Odd Thomas for a while,but on a bored Saturday morning I turned it on and gave it a fair shot. As much fun as the story and cast was… I still couldn’t get into it. Odd Thomas is not a bad movie, just an incredibly mediocre and inoffensive one. The wonky CGI and bad pacing really steals from the charming cast who give some really strong performances.

What I did enjoy was seeing Anton Yelchin get to carry a film on his own for the first time. I had seen him in a few other supporting roles, but this was the first time that I saw him take center stage and carry the film on his shoulders. His tragic passing did change the way I re watched Odd Thomas, but it still didn’t elevate the material enough to change my mind. In the end, it is a middling film that allows some really great acting from young talent. Rest in peace to Anton Yelchin and wish that we could have seen your full potential as an actor and a person.

LUKE TIPTON: Odd Thomas is a weird one. All the genre signifiers scan as horror, but the film’s execution is an action movie. Stephen Sommers has made something of a career out of these kinds of horror themed action hybrids. He helmed 1999’s Mummy, its 2001 sequel and the poorly received Van Helsing, the 2004 attempt at turning the Universal Monsters into an action franchise (those who do not learn from history, and so forth). Odd Thomas isn’t a completely successful, but it’s not without merit, due mostly to the late Anton Yelchin’s warm, funny performance as the psychic short order cook Odd, who moonlights as a kind of vigilante for troubled spirits. It’s a cool setup, but I thought its payoff was a little underwhelming.

There’s a lot of world building and mythology set up going on here, but it’s haphazard. Having never read the Dean Koontz’s novels the film is based on, I get the feeling that the Bodachs – these shadowy trans-dimensional creatures unseen to most people – play a significant part to the mythology of Odd Thomas, yet in the film, they don’t serve much purpose, other than to function as flashy CGI deus ex machinas. Their design is actually pretty decent, but they don’t feel essential to the story.

There’s a bittersweet, lost cause feel to the film as well. This is the kind of low budget genre concept that could get better over a couple of sequels. There’s a potential here that unfortunately, will most likely go unfulfilled, due to the film’s failure at the box office, and the passing of Yelchin. But, upon finishing, I left wanting to see more of the character and this world. 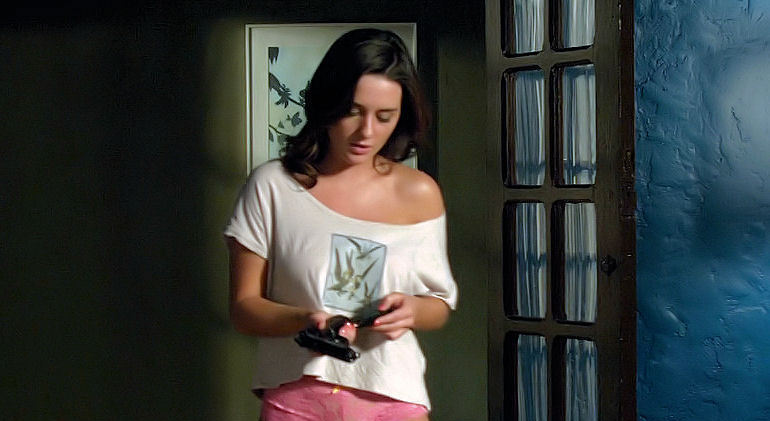 JUSTIN HARLAN: I’m a huge fan of this film and have seen it at least five or six times, probably more than that. It’s cheesy and camp, for sure, but the action sequences are stellar and the story really sucks me in. Anton Yelchin is the star and he’s definitely the strongest part of the film. However, the great Willem Dafoe and the beautiful Addison Timlin certainly play their parts with flair and focus, too.

I’d like to refute the negative comments made by my two fellow Farsighters above, but they make sense. The film is flawed and imperfect, but I love it for that. I reviewed this film for Cinapse sometime back. Moreover, I wish I could see more Yelchin as Odd in a lengthy series of films – God knows Koontz has written enough source material. Yet, this serves as another reminder of the loss of the young, talented Mr. Yelchin. One of the most talented young actors of this generation, gone at 27. Rest in peace.