[Editor’s Note: Just a reminder that in October, Friday Fight becomes Friday Frights and we’ve been covering something every Friday this month. This time it’s just Blaine and I, so I mised up the formatting a bit and layed it out like a piece from our Dissenting Opinions column. I chose this one in honor of the late, great Michael Parks. Enjoy!]

Red State is a movie that I hated when it was released. I had been a big fan of Kevin Smith’s previous work and loved his take on 90s slacker films. His quick-witted dialogue was (and still is) his greatest strength and I couldn’t understand why he had decided to dive into the world of horror with this strange little movie. Before last night, I hadn’t seen this film since its initial release but I was excited to watch it again with fresh eyes. After 5 minutes in… I realized that I still despise this movie, but now I understand why.

For some reason Kevin Smith decides to put this story in some fictitious southern town that (I am assuming) he hopes will make this kind of hate speech more believable. As a southerner, this is fucking enraging. This need to add a southern drawl to the already disgusting rhetoric feels like a personal attack on a culture that did not create the monster known as Westboro Baptist Church (which he is clearly lampooning). Tell me if I am wrong, but isn’t that church located in Topeka? I am curious why he decided to do this, but I will assume it is because it was convenient. We all know that hate speech sounds better with a little “twang” attached to it, right? (Blaine) 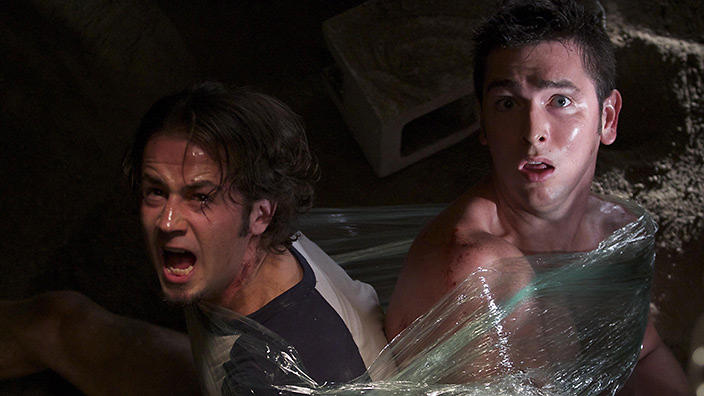 Blaine’s rage boner is pretty entertaining to me, I must admit. However, blind fury is causing him to miss out on a fantastic exploitation film that is horrifying because of how plausible it actually feels. First, let’s address Blaine’s concerns as a Southerner and explain why the setting makes sense and where the issue with Blaine’s logic occurs:

While Westboro is in Kansas, Fred Phelps is a pure product of the hateful South. Born and bred in Mississippi, Fred was indoctrinated in the land of the Southern drawl. Moreover, the way he and his family actually speak has a whole lot of that twang in it. Parks and company looked and sounded the part.

This also doesn’t really matter, as I never once felt as if the film took place in any specific place. Hell, the IMDB calls the setting “middle America”, so I don’t know that it’s meant to take place in any specific town or state. While, perhaps, I missed the cues, I think Blaine is reading too heavily into the Southern dialect and not realizing that the culture depicted in the film feels as much Midwestern as it does Southern. Perhaps there’s some guilt inside Blaine for the region he is trying to defend in his diatribe, seeing as I’m not so certain Smith intended to pick on the South at all. (Justin)

Nonetheless, let me end my tirade with some actual critique and say a few things about Red State (itself). Its a boring attempt to use the horror genre to cash in on a hate group that already receives far too much publicity in the media. The first 2/3rds of the movie are tedious at best and the action during the shootout is watchable, even good at moments. I wish that I had more to say, but there is very little in this film to discuss. Fred Phelps was a bastard who was portrayed as such in the film. Michael Park gives a good performance, but far it is from his best. Its sad that we are using this film to immortalize this great character actor but he tried his best to add something multifaceted to this role. Hopefully, people will remember his excellent work in 100s of other TV and movie roles. (Blaine)

Well, Blaine disappoints me, as I think there a great deal to talk about with this film. To say there is “very little in this film to discuss” in an age where hate crime is becoming commonplace is borderline asinine to me, but I think he allowed his rage to shut him off to the importance of what is going on in this film. As it basically takes the Phelps family and melds them with further zealotry of folks like David Koresh, this film speaks so directly to what’s going on in America right now. As the neo-Nazi rallies and hate-filled rhetoric ramp up, evangelical Christians are doing apologetic work like it’s their job. The playing field is set for a game just like this awful one to play out… thankfully, hopefully, I don’t think it will. But, there is so much thematic fat to chew on for a 2017 audience.

In short, I think that there is likely a lot about this film that could have been fleshed out better, while it still is remarkably effective for me. Parks is incredible, as is Goodman. National treasures, those two. Sad that we’ve since lost the great Mr. Parks, but at least we have some incredible performances from him to always look back at.