Oh the words that could fill the pages of Blank Books. Tales of veteran musicians who have rocked the world for decades, yet remain under-appreciated for their contributions.

The Brothers Sprinkle are such protagonists. Getting their start in the “Christian” Alternative Rock band Poor Old Lu in the early-mid 90s, Aaron, guitars/vocals, and Jesse, drums/bgvs, have remained entrenched in professional music while their former bandmates have moved on to other things. Yet neither brother has been adequately recognized for their musical talents outside of the Christian music ‘ghetto’. Older brother Aaron is more known for his production on many massively successful albums for the Tooth and Nail record label… and little bro Jesse played drums on lots of those albums, (namely with Dead Poetic and Demon Hunter), but has never received the accolades he deserves for his studio work, much less as a live performer. And neither of them have seen that kind of success as the multi-talented singer/songwriters they both are. This old school fan is hoping that Blank Books changes all of that…and I believe it has the potential to.

The Brothers are billing this project as the debut record from a new band, one they’ve been talking about doing for years..and the first time they’ve worked together this extensively since the Poor Old Lu days. The bulk of the EP was recorded back in 2015, at which point they began announcing the new endeavor and getting the old Lusers excited. But finalization and release was delayed until 2017, as Aaron released a couple solo records to fulfill his contract with Tooth and Nail. For several days the boys’ social media presence began touting a “big announcement” on Wednesday November 22, on the band’s Facebook page. That announcement turned out to be the debut EP’s digital release and CD pre-release on Bandcamp. Needless to say, those of us who have been following the Sprinkle exploits for years were quick to purchase the new release without so much as a sample listen.

But does it sound like Poor Old Lu? Well… no… it doesn’t. But would we really want it to? First of all, Aaron isn’t Scott Hunter… his vocals aren’t like Scott’s and his melodies don’t sound like POL’s vocalist’s. But more importantly, Aaron and Jesse aren’t the kids they were back then. Interestingly, even though you can hear the maturity in the new band, Blank Books’ sound reveals a more youthful hard rock edge than POL ever displayed. In fact, here Aaron’s guitars are bigger, meaner, just plain heavier than anything we’ve ever heard from him before. I guess the emo/metal/core stuff he spent the 00’s producing (and Jesse drummed on) must’ve rubbed off on them. I assume there’s some droppage involved in the guitar tuning, and definitely some big stacks of amps. So yeah… it’s definitely a more aggressive hard rock that Aaron’s longtime fans were expecting from him, but it’s so much more than hard rock and there’s really nothing ‘metal’ about it. While there’s plenty of power chord chugging going on, there’s a lot more depth, nuance, and melodic/harmonic sense in Aaron’s playing, than most of the harder stuff dominating rock music these days. And Aaron certainly didn’t restrict himself to rhythm guitar. His lead work features the kind of melodic riffing we’ve come to expect from him, but many of those riffs come in much bigger sizes and shapes than we’re used to. Additionally, this Blank Books EP features some of the tastiest and sickest solos big brother Sprinkle has ever given us. He’s still no shredder, but his solos contain more soul and intensity than the top 5 fastest guitarists put together. 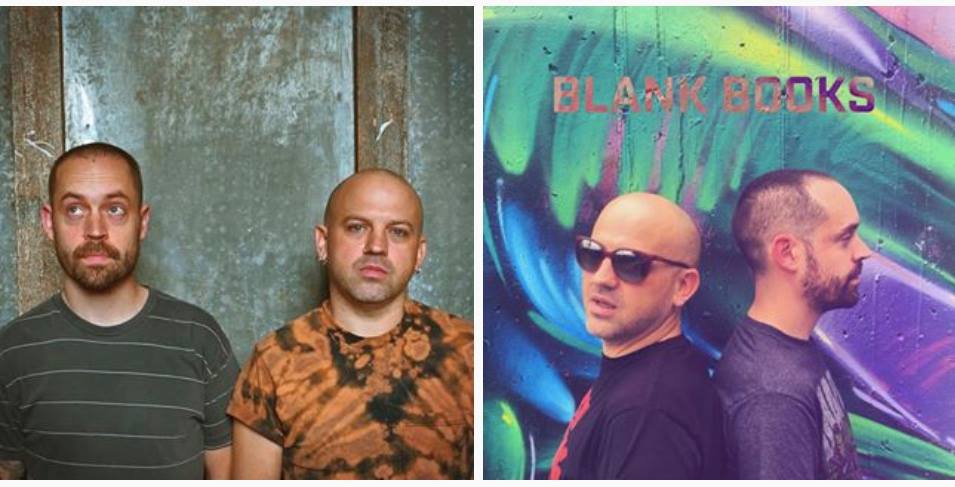 As usual, Jesse has the knack for finding the perfect accents and groove to keep the drumming tight, interesting, and mind blowing and to highlight the depth in Aaron’s writing. Actually, it’s his playing that reveals the most maturity since his teenage years in Poor Old Lu. While he displays less reckless abandon these days, his fills and thrills still keep the listener on the edge of your seat and he refuses to play a standard beat or anything safe for that matter. His time spent in those emo/core/metal bands definitely comes through here, but without the cliches that metal drumming can often fall into. His playing is definitely more aggressive and intense than the Lu days, but he hasn’t lost that ability to always find a different place for a hit or a fill than you would ever expect.

To be honest, Blank Books isn’t exactly breaking any new ground. I mean, the overall sound is a somewhat generic hard alt/rock… not too far away from Foo Fighters or some of the T&N bands the boys have formerly been associated with. While Aaron’s vocal approach is certainly not typical for this kind of harder rock, his song/melody writing hasn’t really changed much since his time writing and singing for Fair and making his solo records. But none of that means that the band or its debut lacks creativity and originality. Aaron’s melody writing is absolutely unique. His voice might slightly resemble some of the more tender vocalists in recent ’emo’, but his ability to write such sweet pop melodies, with just the right amount of melancholy, doesn’t sound like anybody else. Also, the way his almost syrupy melodies move around the shape-shifting chord changes keeps things interesting and moves the emotion of each song along…sometimes in contrast to the heavy nature of the underlying music, and sometimes just perfectly suited by the more aggressive emotive movement of the big guitars and drums. Because the melodies are absent of the obvious ‘ear-worm’ type hooks, the songs might not stand out individually at first… almost blend together in a way, especially as recollected between listenings. But that doesn’t mean that they lack any enjoyability or engagement as you listen. And after repeated spins, the subtle nuances and unique qualities begin to define each song individually.

It’s been a long time since I’ve been this emotional over new music. The more I listen, the closer I get to weeping over it. I’ve kinda forgotten just how much kinda aggressive rock can move me, because I certainly don’t listen to, (much less find new), much of it any more. There really is just something special about what these two brothers can do when they join forces. It’s not Poor Old Lu or anything else either of them has done over the years. Yet it’s definitely a case of two brothers working together the way that only family can.

Here’s to hoping that these Blank Books will be filled with much more great rock and roll… and finally the kind of recognition and success that both members deserve!

3 Replies to “Blank Books With Sprinkles: The Poor Old Brothers Still Got It!”