Another year, another eX-Fest. If you’re not familiar, Exhumed Films is a group local to Philly that collects 35mm prints of movies that are generally otherwise forgotten to time. And every summer they marathon 7 of these gems in their exploitation festival that they call eX-Fest. It’s one of the many reasons I haven’t left Philly, cause where the hell else am I going to get the privilege to sit in a sweaty theater with a bunch of movie nerds and see these better-off-forgotten classics?

This year’s line-up was a bit hit or miss, but that’s kind of always the case with these movies. They’re either to your taste or they’re not. On the side of not to my taste this year were Dog Day, starring a near-death Lee Marvin, and Idaho Transfer, directed by Peter Fonda.

Dog Day has maybe one of the best opening sequences I’ve ever seen. It’s gorgeous, it’s intriguing, and it becomes explosive in its final minutes before settling down into a completely different movie about a family that mostly just has sex with each other on a farm. It’s rather boring, and given that I was so into the first 10 minutes of this, extra disappointing.

Idaho Transfer is an attempt at using a sci-fi premise to do a quiet Western, but it’s just a slog to get through. It’s a time travel movie where the past and the future are completely indistinguishable from one another unless you’re listening to someone droll on about whatever is supposed to be happening in this movie. There’s something kind of hypnotic about it, it’s mostly just shots of teenagers wandering around American vistas, but it ultimately is just really slow and really boring. It’s worth noting that this movie was preceded by a short directed by Martin Brest and starring a young Danny DeVito (and Rea Pearlman’s first onscreen role!) called Hot Dogs for Guaguin, for which I tried to find a link but it doesn’t look like it’s available anywhere currently. This is a great short film about an artist that wants to blow up the Statue of Liberty for a project. DeVito is a blast in it and it has some awesome practical FX work. I really recommend checking it out if you can find it. 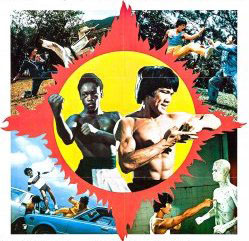 Falling a bit more on the side of my taste were the bulk of the movies, thankfully. Soul Brothers of Kung Fu is an attempt at Bruceploitation meets blaxploitation that is just kind of silly and charming and fun. The lead actor is billed as Bruce Li and the movie is full of dialogue where he kicks someone in the face and a character will turn to him and ask “Who you tryna be, Bruce Lee?” It is in no way ashamed of the fact that it’s trading on a dead man’s fame, and then doubles down on that by including a young, black American in the title that is then barely in the movie, just to capitalize on that audience as well.

Pete, Pearl, and the Pole was a really fun period gangster movie that I enjoyed quite a bit. The main cast, Tony Anthony as Pete, Lucretia Love as Pearl, and Adolfo Celi as The Pole, are really fantastic in this, and Celi especially has a ball just chewing this movie to pieces. My only hesitation with this movie is that I’m still not sure if it’s trying to be a parody or not, it sort of exists in this middle ground where it ends up being neither and that had me disconnecting from it a bit.

Now, Trackdown I would like to dedicate a little more time to here. Trackdown might have been the crowd pleasing hit of the day – people were cheering and applauding throughout, and the finale earned a huge reaction from our audience. The reason that’s interesting is because this movie is like a Trump voter’s ultimate fantasy. It’s about a cowboy from Montana having to rescue his sister from a sex trafficking ring in Los Angeles, where the police refuse to help because cities are crime infested hell holes where nothing good ever happens. So he’s forced to take matters into his own hands and beat and kill his way through every Latino gang and transgender criminal that obstructs his path to the man that purchased his sister. It is deeply troubling to watch in 2018, and an absolute blast. I really do recommend checking this out cause I had so much fun watching it in spite of itself, and I do think there’s something interesting about watching this ideology written out as a fantasy like this. 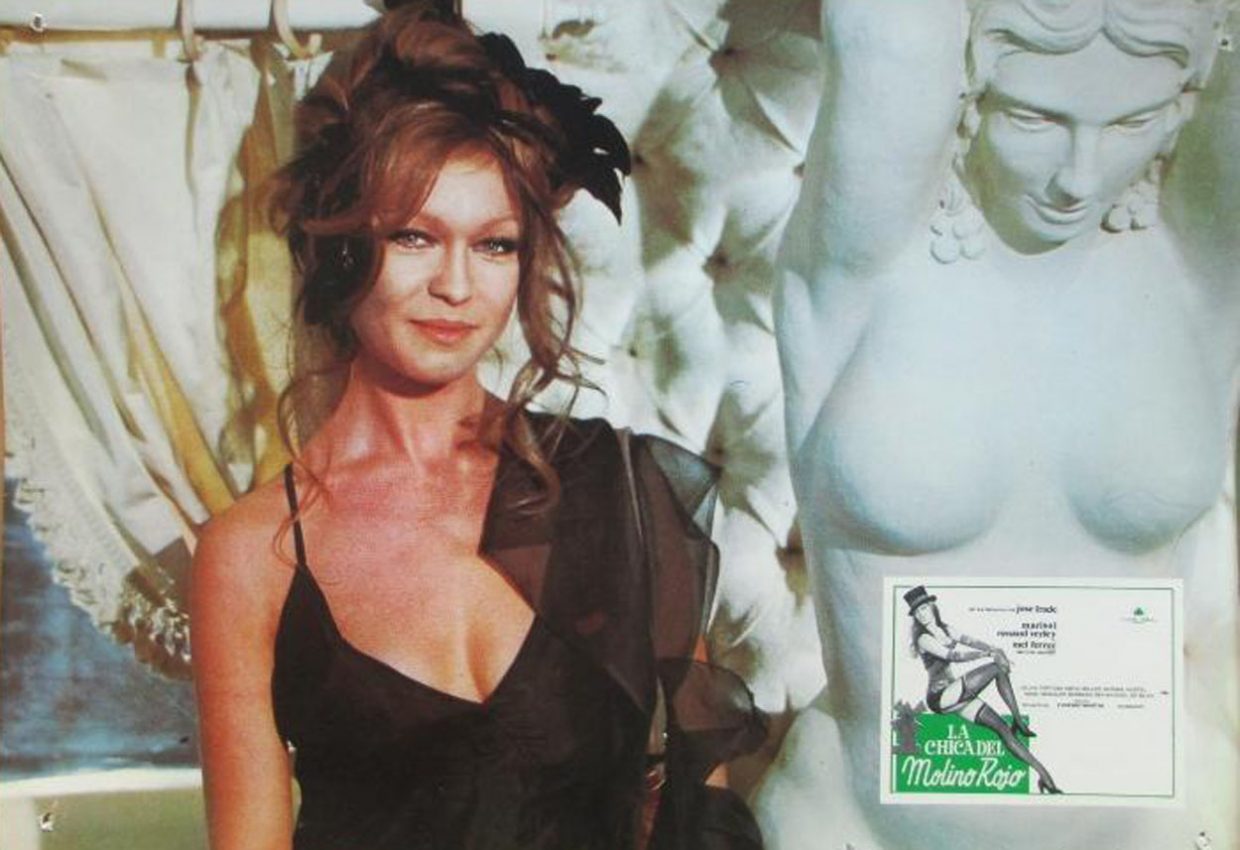 For me, the best movie of the day was The Girl from the Red Cabaret, which is a little hard to explain because it’s got this winding story that will often spend a ton of time introducing us to characters that the movie is ultimately not about. But that’s a good thing here, as that’s kind of the point. It’s about a man, Larry Elliot, who travels the world convincing beautiful women to sleep with him only to move on to another country and another woman at the drop of a hat. The movie begins by introducing us to 5 of these women, humanizing them as he hadn’t, even though they ultimately aren’t in the movie beyond the first act. What it’s really about is another man who was wronged by Elliot in his past and wants to enact some sort of vague revenge. To do this, he attempts to find a woman that he believes Elliot will find irresistible and lure him into a trap with her. But of course, as these things go, the bait, the mark, and the mastermind all end up entangled in emotions they didn’t expect. It’s a great, fun movie that features like three different song and dance routines at a Cabaret that are truly entrancing, and an incredible chase scene that goes from foot, to car, to car, to car, to foot, to car, to boat, to car, to foot, etc. It’s unbelievable, and goes on forever. I really, really enjoyed this movie.

But I of course saved the best for last, as eX-Fest itself always does. While The Girl from the Red Cabaret was my favorite movie of the day, the final film of eX-Fest is always the one that will melt your face and leave you with an indelible memory. And this year that movie was Fatal Termination, a 1990 Hong Kong actioner that, while not great, has the single most incredible thing I’ve ever seen in a movie. I mean that sincerely. First of all, imagine Jackie Chan’s Police Story but directed by John Woo, and you’ll start to get a sense of this movie. For the first half hour or so it’s a bit slow, but the hilarious English subtitles will carry you through that (for instance when trying to tell a crowd of innocent people to duck for cover during a shoot out, rather than yelling “GET DOWN!” the cops are translated as yelling “BEND OVER!”). But once you get through the first act, you’re basically treated to non-stop action sequences throughout, some of which are exceptionally choreographed fights, some of which are big, insane ideas for set pieces, and one of which left our entire theater in awe. That would be this totally bugnuts car chase (video below) that features a 6-year-old stunt performer, and that’s the nice way to say it. It’s a highspeed car chase in which a villainous white man hangs a little girl out the window of the car – and in every shot it’s very clearly actually a little girl who is very clearly actually fucking terrified. It is so hard to watch, and it is the most thrilling thing I have EVER seen in a movie. No horror movie has ever made me as tense as this scene. The entire theater was gasping and crawling in their seats with discomfort. It is just so unbelievable, so inherently wrong, and so incredibly effective.

All in all, it was another successful and absolutely wonderful eX-Fest. I can’t wait to see what Exhumed cooks up for next year’s show. And in the meantime they’ve got a ton of events throughout the year, both in Philly and at The Mahoning Drive-In Theater just outside the city, so be sure to keep up with them.

Check out my list on Letterboxd for all the trailers that were screened before each movie and more in-depth reviews of the films themselves.

One Reply to “eX-Fest VIII: Bringing Sleazy Action and Grind Back to Philly… Again!”