Prior to a few weeks ago, I had no idea who Patrick Grant was. Since that time, his 20th Annivery re-release of FIELDS AMAZE and other sTRANGE music has become a vital piece of my October heavy rotation. Inspired by horror films, classical music, punk rock, and a variety of other influences, the 9 tracks on this version of Grant’s 1998 release are sometimes chaotic, sometimes smooth, often dark, and always extremely interesting. Most tracks have several distinct movements, as well. The horror movie playing in my mind while listening to this album is a damn good one, thanks to the dark tones and unique feel of Grant’s compositions.

Grant originally put these songs together in 1997 with a strong cast of NYC based musicians, while working with Philip Glass at Looking Glass Studios. While the inspiration from Glass is clear, Grant has his own unique voice. Born in Detroit, now living in the Big Apple, Grant’s influences are as diverse as the day is long. His DIY punk ethic and understanding to the punk rock ethic are as evident as his love for Glass’s minimalist composition style. He has an obvious affinity for world music, as well as ethereal sounds. His use of piano is a highlight for me, while the instrumentation is extremely diverse. Grant clearly is a lover of music and all types of music. He uses this love to create something full of emotion and heart.

I mentioned his love of horror film and I’d love to dive more into horror and exploitation film with him one day, especially in regards to its influence on these songs. One of my favorite tracks is “Imaginary Horror Film – Part 1”, which is no surprise based on who I am and my discussion of this album thus far. This and other tracks seem to knowingly nod to the soundtracks from great like Fabio Frizzi and John Carpenter. I can’t help but experience these songs cinematically, which is a testament to the music.

This is a perfect album for October and beyond. Check it out at Bandcamp, where you can listen online, grab it digitally, and grab it on CD. I leave you with this cool graphic about the songs on the album. It’s completely accurate and that should tell you just how unique and fun this album is. 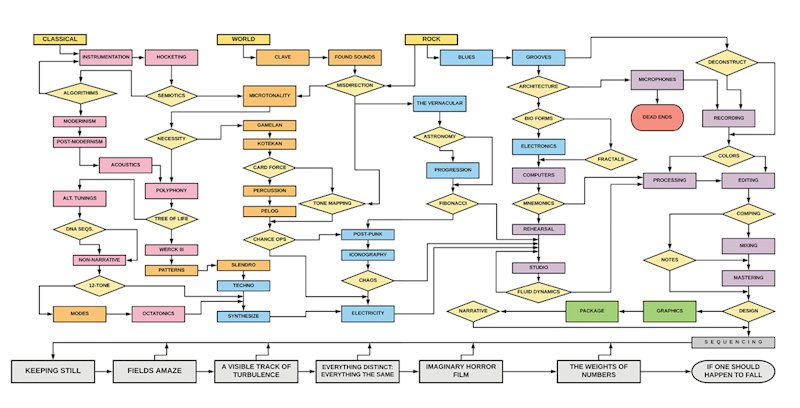