Krull is a 1983 science fiction adventure film. Mill Creek Entertainment has released this on Blu-ray with some excellent retro VHS packaging complete with stickers you would find on video store rentals. The film transfer is 100% excellent and surpasses any other home video release in terms of visual and audio quality and is high end entertainment at a budget price. The film itself is another story all together.

The plot of the film deals with an invasion of the planet Krull by the “Beast” and his “Slayers” durning a wedding of Princess Lyssa and Prince Colwyn by which both Kings are killed, both families royal armies are destroyed and the poor princess is kidnapped. The prince is told that the Beast can be killed by an magical five pointed throwing weapon. He goes to find the item, gather a rag tag group of misfits for an army to fight the Beast and Slayers on the Beast’s huge teleporting ship called “The Black Fortress”.

Krull is something of a cult film nowadays that is either loved or hated by both critics and film waters alike. The budget at the time got upwards to 27 million dollars but only made $16.5 million back from ticket sales and considered a box office bomb. People said the special effects lifted the film but the main complaint was that the whole movie came off as Star Wars lite after numerous rewrites in which led to some ideas not being fully fleshed out in the movie. Overall, it’s still a great film to watch and its cult status is well deserved. 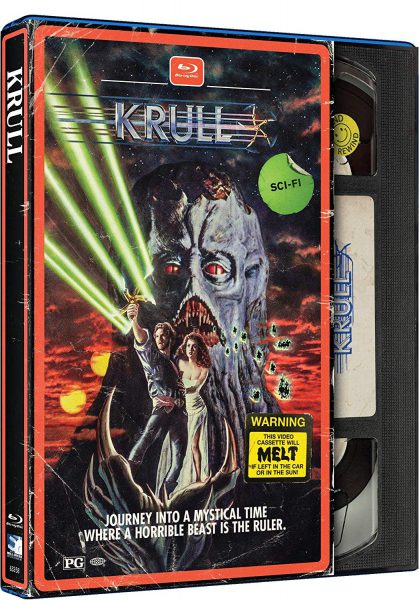 Grab this awesome edition of this cult classic wherever Blu-rays are sold starting next week!