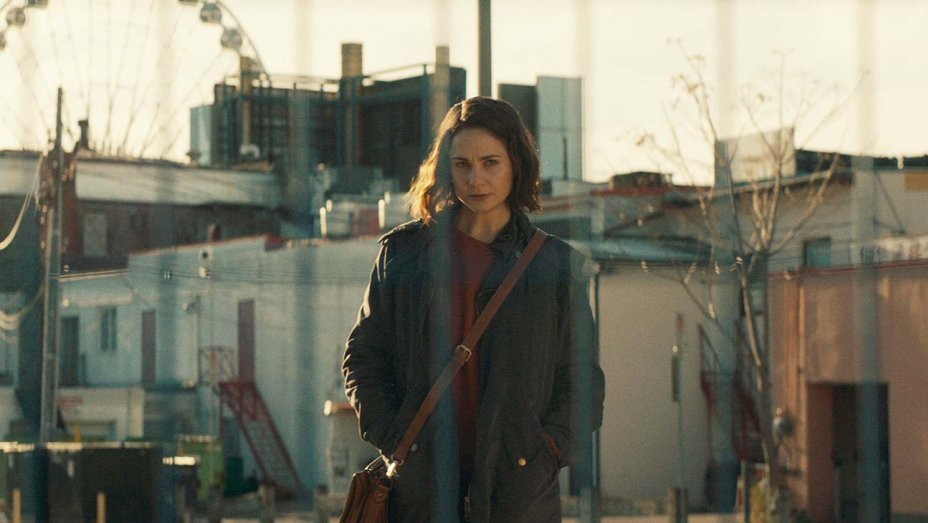 Disappearance at Clifton Hill (aka Clifton Hill) has been creating a buzz for a little while now. Canadian filmmaker Albert Shin’s third feature as a director and third feature as a writer, the neo-noir styled mystery about an adult woman exploring a possible kidnapping and murder she witnessed as a 7 year old. Premiering at the 2019 Toronto International Film Festival, the film went on to several Canadian Screen Award nominations on its way to its US release from IFC Midnight. Hitting theaters and VOD today, this one is cure to make fans of a good mystery quite happy.

Following the death of her mother, Abby (Tuppence Middleton, The Imitation Game, Downton Abbey), a troubled young woman with a checkered past, returns to her hometown of Niagara Falls and the dilapidated motel her family used to run. While there, she finds herself drawn once again into a mystery that has haunted her since childhood: what happened to the young boy she saw being violently abducted in the woods twenty-five years ago?

Tuppence Middleton is a stellar lead as Abby, the unreliable narrator who investigates a kidnapping she believes she witness as a child. As she proceeds to dive deeper and deeper into the story, she finds out the depths of the darkness at play in her hometown… but no one fully believes her because she’s proven quite the undependable and untrustworthy person in her adult life.

One of her greatest assets in this quest she’s set out on is local diver and podcaster, Walter. Played by the great David Cronenberg, he’s essentially the town’s crazy old guy who knows all. While Scuba Dave Cronenberg deserves to be a meme and him telling Middelton’s Abby to “please rate and review” validates my life as a podcaster, he’s actually perfect in this role in a completely unironic sense. Beyond Middleton being the central figure of this film, Cronenberg’s Walter is the second strongest piece in the film. It feels great to see the genre master commit to a role in a solid independent film with this much gusto.

The rest of the cast also deliver, along with the strong script and beautiful cinematography, to create a really captivating genre thriller. Out now in select theaters nationwide and on all major VOD services, this is one that’s worth your time. Highly recommended.