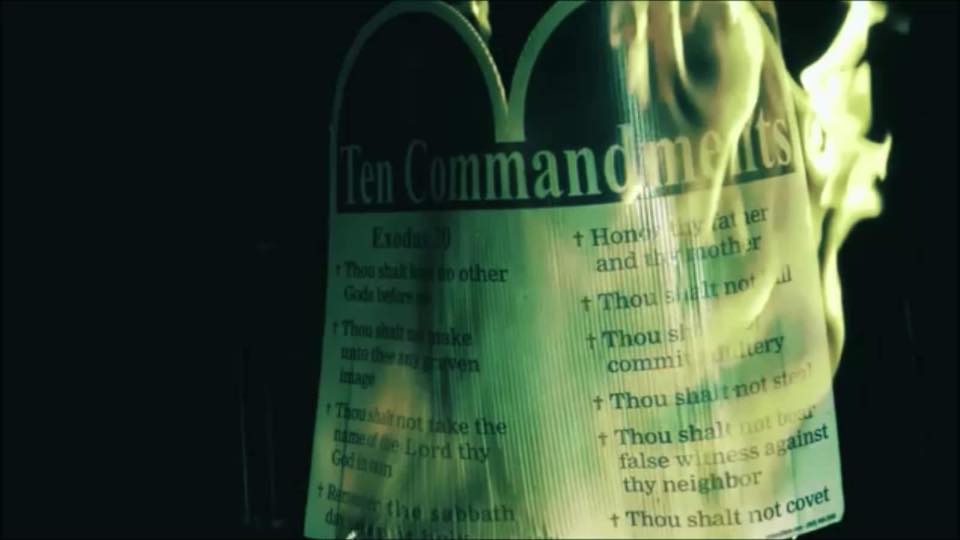 An in your face act of homemade aggression with the intent to disgust and prevail in its evil deeds. Dakota Ray writes, plays and directs his heavy metal apocalyptic backyard hellscape American Anti-Christ which appropriately plays like any obscure Scandanavian black metal demo tape would with its shoe-string budget production, in your face intentions and not giving a shit what you think of it. And if you can’t lean into that, you won’t enjoy it one bit.

Continuing on the demo tape analogy American Anti-Christ is set up into six different tracks (vignettes). We open on “I Am God: My Drug Induced Ego Trip”, the establishing scene where we see a sickly green filter on the camera to imply we are in a wasteland and are introduced to the Anti-Christ (Dakota Ray) as he shoots heroin and listens to his voicemail manifestos about the meaning of evil. The devil then appears to him, he runs out to smash a nest of baby eggs from a tree and declares “life is destroyed, not created.” We transition on a dead rabbit carcass being run over and  evil is now clearly afoot. The following “I Am Satan In Disguise” is rather brief, a scene of wrist cutting, abortion signs, another dead animal and a suddenly recurring theme of the Anti-Christ sticking his cigarettes into the eye holes of dead things. Oh, and then the Anti-Christ takes a selfie.

“Revelations: Sickness of Immorality” is the most coherent and narrative segment that comes next. Here we follow a junkie woman in search for a fix and explore the costs of her addiction in this imagined wasteland. When a blow job and a gram isn’t enough she suddenly finds herself in the clutches of a snuff film maker in exchange for more. Of course she doesn’t get anything but a drill in the head but it’s a climax if there ever was one. “Dark Daze of Anti Christ” comes back to the Anti Christ who has just killed a child and has more drugs to do and voicemails to listen to. And what can best be described as a strange riff between God told Me To and Taxi Driver “The Beauty of Sin” is the second to last segment concerned with a religious vigilante whose out to clean up the streets with a gas canister, matches and a gun. There’s even a weightlifting montage similar to Travis Bickle’s training scenes. We finally end this hellish journey through disgust and debauchery with a music video called “Rising Above God” which starts with an oddly positive tone but is quick to reassert it’s evil heavy metal soundtrack and ghastly Anti-Christ who swallows an angel and pukes on Jesus!

Everything about this film is metal! It’s riddled with pentagrams, defiled religious art, dead things, drugs, demons, tarot cards and of course blood. All of which Ray exploits in as many scenes as possible to create his unique and unrelenting tone. With any backyard horror movie there’s a certain expectation you must yield to in relation to the effects but this is where Ray shows most of his talent. Utilizing fog machines, coloring and various masks he depicts hallucinatory demons, drill to cranium violence and immortal drug use lathered in a grainy green filter. It’s dirty. And that’s exactly how he wants you to feel. What American Anti-Christ lacks in narrative, it certainly makes up for in gusto and a pleasant reminder that backyard cinema is alive. It may not spark a renaissance but it’s worth a roll in the very trash that gave birth to the likes of Kenneth Anger and John Waters.

Watch it yourself at King of Horror on YouTube: