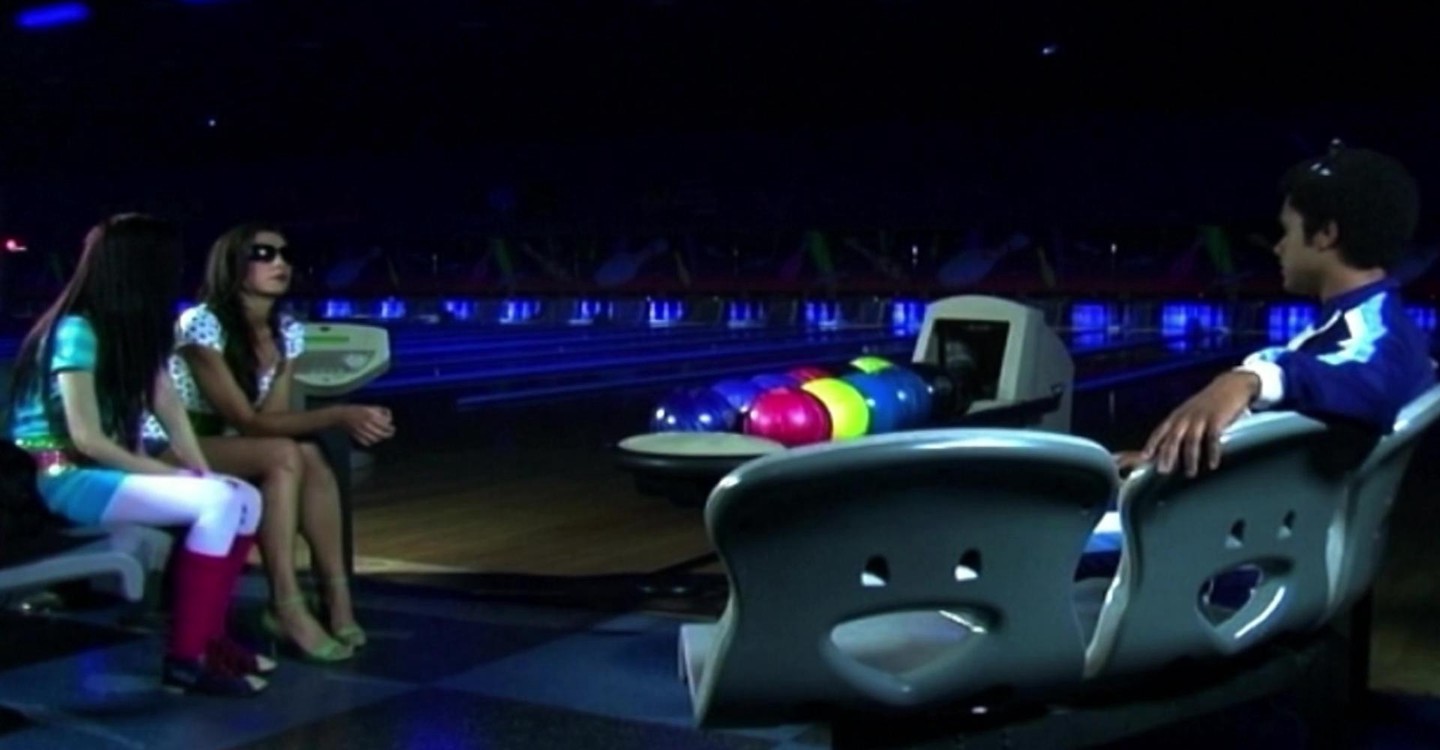 With nostalgia for the 80s nearing its crest in the world of cinema, a Canadian exploitation slasher concerned with bowling and a bag headed killer seems like it would find its audience were it not for jamming it’s tongue too far into its cheek. With Gutterballs there’s a fine line between meta-commentary/homage and the low production cheese that’s spoiled over any sense of clarity in what the film wants to be. It’s sleazy, savage, goofy and poorly acted; all the sure fire signs for any slasher fan to give it a decent look over. The poster art even plays on the godfather of cult slasher cinema’s infamous tagline, reading “I warned you not to [bowl] tonight!”

The film opens up with contention. In what appears to be an after-hours bowling league, two teams face off on the lanes. It’s a classic set up. The freaks and geeks vs. the jocks. Naturally with any plot concerned with groups of teens, sexual tensions and frustrations arise when a peculiarly psychotic jock named Steve learns his teammate Jaime had sex with the girl Lisa from the other team. This does not sit well with Steve and in an act of aggression he incites a beating on Lisa’s trans friend Sam. Somewhat of a highlight unspoken in the 80’s nostalgia, anti-gay epithets and fists are thrown until Lisa breaks it up. This does not sit well with psycho jock Steve. Lisa is later trapped by Steve and his hench bros in the arcade. A savage rape occurs and Lisa is left with a quest for revenge. The following night the two teams once again meet, though Lisa’s teammates notice she seems aloof. It’s not long before tensions arise again and the familiar structures of slasher formulas begin to take place. Teens become horny, chase after each other into dark corners and from the shadows a killer emerges with a bowling bag over their head.

Counted by a mysterious score screen, one by one the teens are killed off in a variety of bowling related ways. Choked by shoe laces, beaten with a pin, pulverized by bowling balls, a head is melted in the ball waxing machine, genitals are mutilated, several are sodomized by bowling pins and a sexual suffocation by sixty-nine proves the most inventive of the kills featured. Each is profoundly gory, vicious and satisfactory to any gorehound’s thirst for blood with a bit of schlock and awe.

However past the brutality, most of this movie is strewn together by poorly acted scenes that make for an odd tone that doesn’t seem to have an intentional tongue in it’s cheek. Most of the dialogue is just slews of profanity laden insults and much of the time is spent getting people naked and alone. While there is a rape revenge plot, it’s all rather reliant on the twist ending reveal of the killer that doesn’t really make a whole lot of sense with it’s double crossings, conspiracy and not entirely explained mystery about where the hell Lisa was this whole time.

Gutterballs is certainly the only title fitting for this film. It’s sleazy, uncomfortable, awkwardly toned and in your face at all times to push it to the limit. Whether or not it declares itself meta, this low budget canuxploitation stands in a long line of tradition for the sub genre and does it’s best to push past it’s production limitations to deliver a twisted splatter flick sure to stun and revolt anyone who sees it. It may not knock all the pins down but it atleast gets its name on the board.