I must begin with the admission that Olaf Ittenbach is quite foreign to me, not just in the literal sense – he’s from Germany – but also in the fact that this new Blu-ray release of his 2010 extreme horror film, No Reason, is the first film of his that I’m diving into. His reputation seems to precede him, with some who love his extreme ways and others who think he goes too far. For me, extremity, gore, and viscera aren’t a turn off if a film has a strong theme, a powerful story, or unique cinematic flourishes. In the case of No Return, I can’t say any of these redeeming qualities exist.

Clearly, films like No Return have their audience. In fact, the hardcore fans of Ittenbach and fans of this film, specifically, would certainly argue its cinematic and thematic merits – even if this particular genre nerd and movie junkie can’t find them. Instead, No Reason feels like the longest, most grueling 75 minute film out there, with excessive gore, extreme depravity, and some of the most gruesome scenes in the past 10 to 15 years. Sadly, it feels like extremity for extremity sake from the moment the darkness takes hold.

At the start of the film, there is a powerfully dark hook and a strong transition into what initially promises to be a compelling narrative. However, once the film breaks into its nightmare logic, all compelling elements seem to break down. Not only is the plot nearly incomprehensible, but the promise of strong film craft falls out the window with the narrative. Instead of the initially impressive cinematography and editing, we’re given shoddy and choppy cuts, poor lighting, and equally poor framing. It seems this is an esthetic choice more than simply poor execution, but the aesthetic chosen here doesn’t really work.

Moreover, the flesh mutilation, depraved acts, and buckets of blood are difficult to tolerate without something to redeem them. Thus, this is not a film for casual horror fans or even those who dabble in the extreme. Instead, this is a film for hardcore extreme film junkies and very few others. 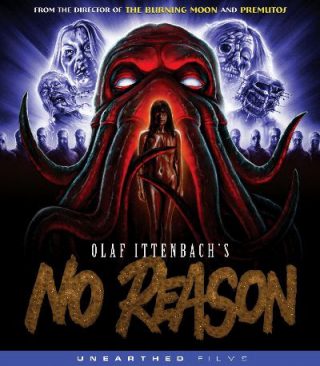 With all of that said, if you are part of the target audience and this type of extremity is your type of thing, Unearthed’s new Blu-ray is the definitive way to watch No Reason. Fantastic new artwork and great features including an interview with genre stalwart, actor, and writer Timothy Balme (also known for his work in Dead Alive) mark a stellar release of this dark and twisted horror film.