Gaming’s Scariest Moments is back and going strong after taking most of 2021 off. More exhilarating than ever, join Eric as he works his way through more frightening fun! This month, he takes on the Returnal: Ascension DLC, available free for Returnal owners. 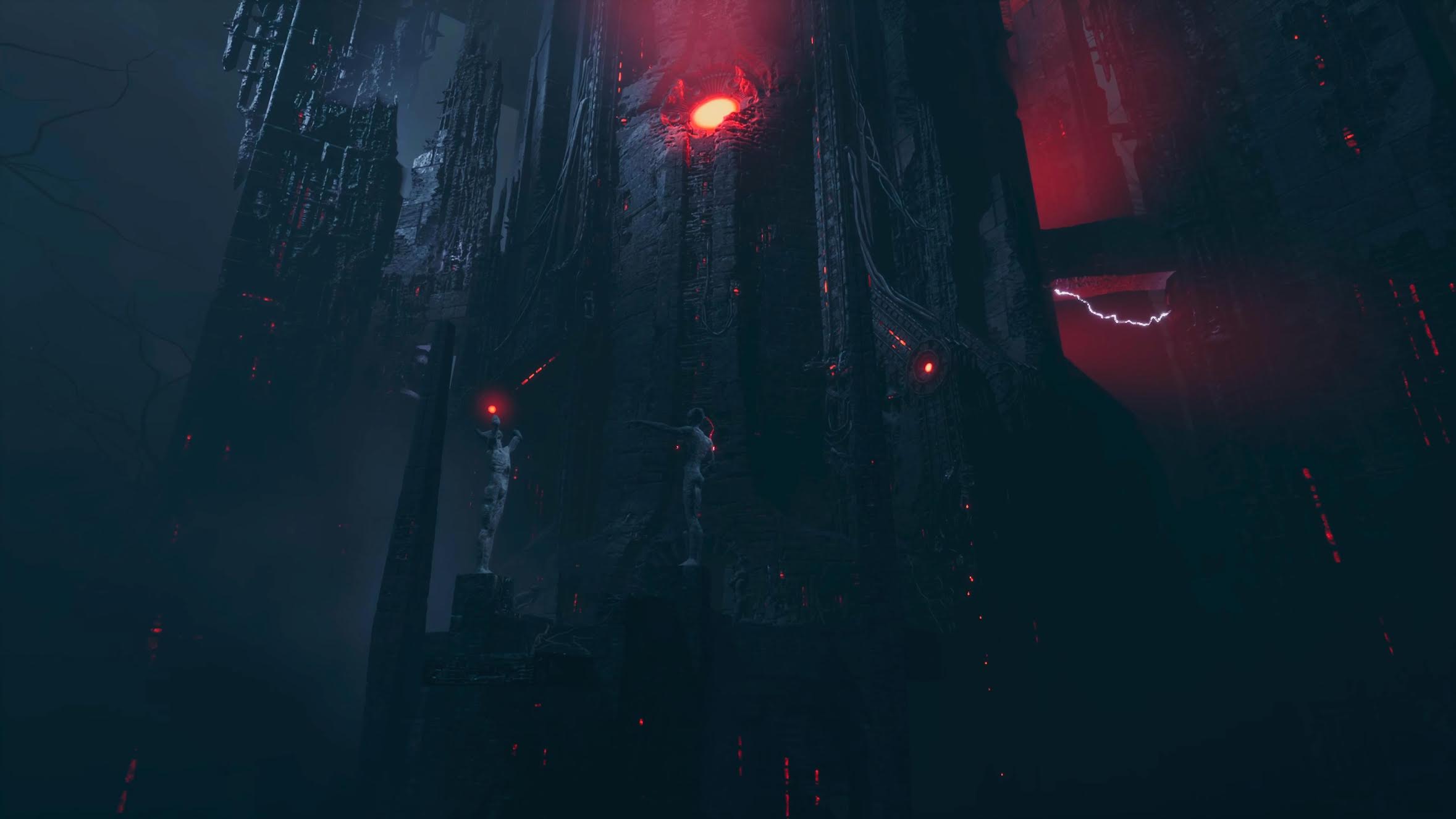 Suffice it to say that I am a big fan of the recent PS5 Housemarque release Returnal. Launched back on April 30th, 2021, this seamless blending of 3rd person action, rogue-like shooter elements, bullet-hell gameplay and Souls-like difficulty simply enraptured me from the first moments you landed on the mysterious evolving planet of Atropos. I truly wasn’t expected to get hooked on this game the way I did, but I played this monstrosity for over 70 hours in 2021 and I did EVERY-thing this game had to offer, finally achieving the Platinum trophy in late December. 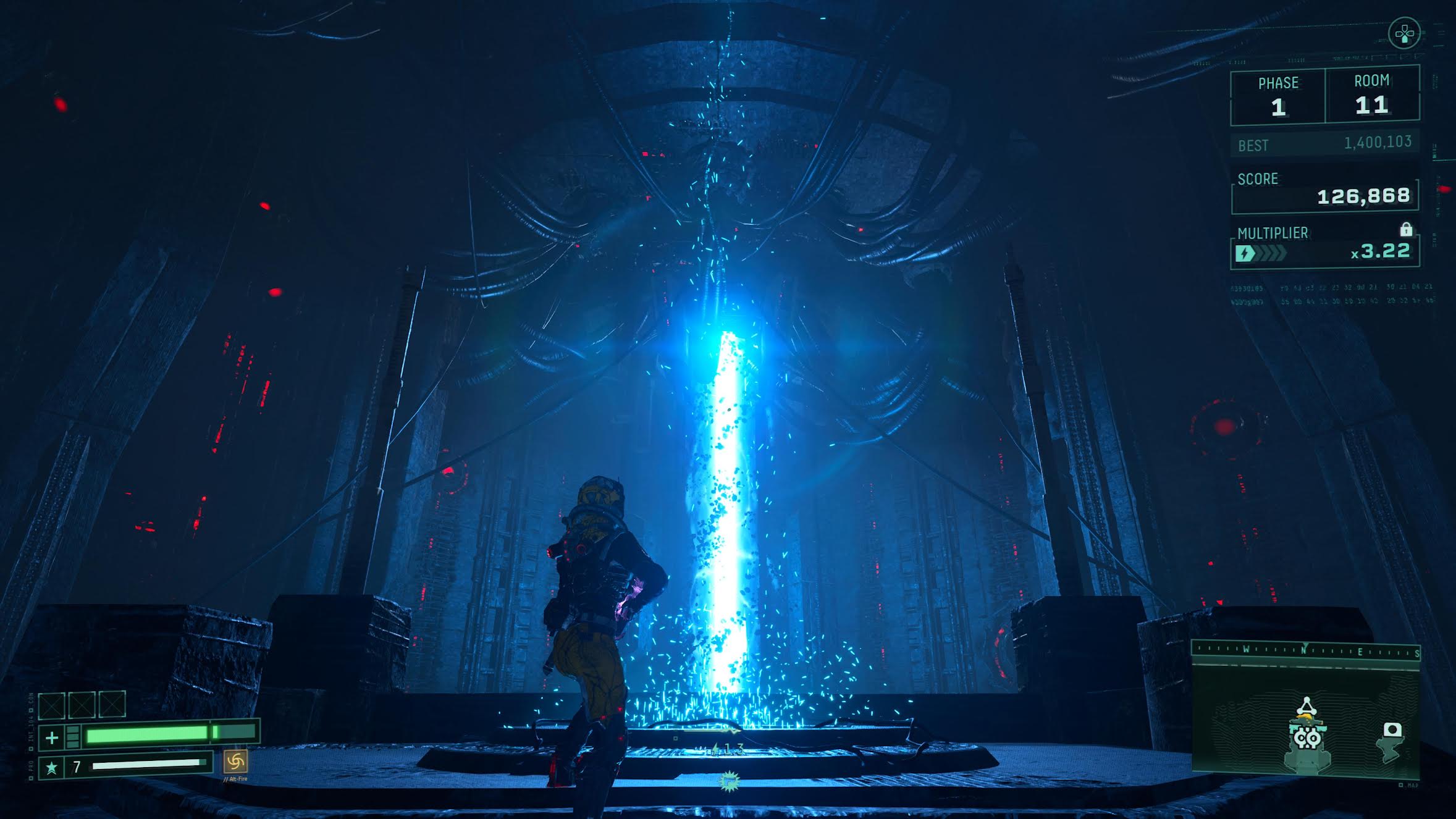 I’ve got to admit, a rush of sadness fell over me after that. With nothing else to do, would my love affair with Returnal be over? Alas, thankfully, developer Housemarque, before moving onto a new IP as their next project, decided to drop some awesomeness for us. For the low, low price of FREE (assuming you own the main game already), they just released a new 3.0 update, named Returnal: Ascension. One major change with this new update was that they added the ability to go through the game in online co-op mode. This is a great addition to players who might have had issues trying to get through the main storyline and I think it truly will get more people involved in finishing their adventure if they hit a roadblock previously. It seemed to work rather well in my limited check on it, and it keeps the players on an invisible tether of sorts so you can only be so far from each other before the 2nd player warps to the host’s player position. However, the real highlight of this update, and what will be the focal point of my review, is the addition of a new gameplay/story section of the game, The Tower of Sisyphus. 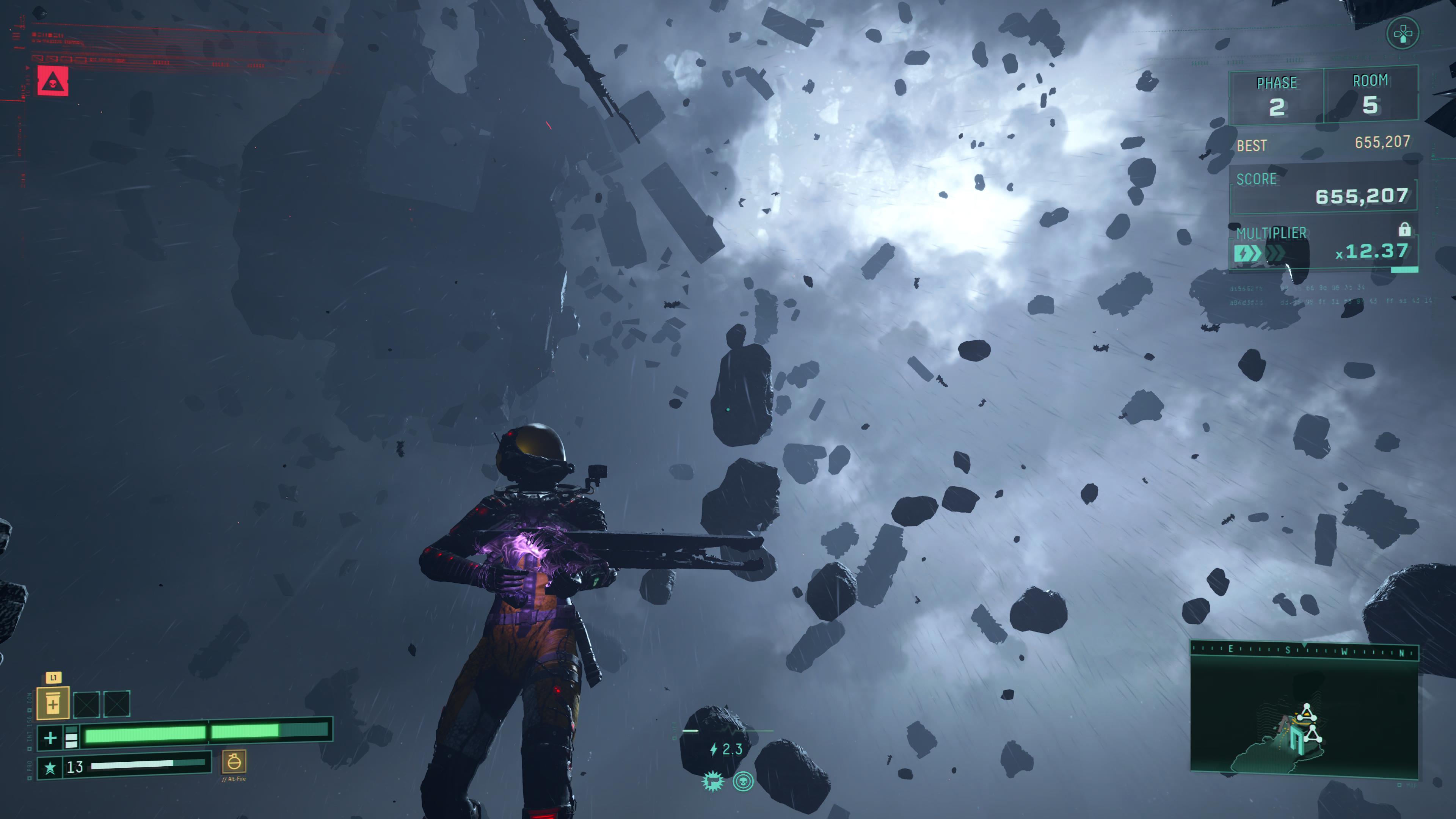 The Tower of Sisyphus – a reference to Greek mythology of the man Sisyphus, who was forced by Zeus to roll a boulder up a hill that would always end up rolling back down the hill… for eternity – is a building of madness that awaits the player. This monstrosity can be accessed from the main game in the room where you start initially/after each death – and can only be accessed once you have acquired the Icarian Grapnel – this new gameplay section is an immensely tall tower that has the player ascending from floor to floor with no end in sight, an endless assault of enemies, calm moments of Zen and pure action. Each phase consists of 20 floors, which vary between enclosed rooms with massive fights against all the enemies you have encountered during the game or rooms to buy items, restock health, find new weapons etc. This follows the procedurally generated method of the main game in Returnal, so no two trips up the tower are the same, an always welcome addition to keep the player on their toes. To add the cherry on top, Housemarque decided to even add NEW story sequences to the game, told through new first-person segments that take place in a very mysterious hospital (not Selene’s house, as the story segments were told in the main game). That was the true draw for me as the main game left a lot of unanswered questions while still being completely engrossed in the story of our protagonist Selene. I wanted to know more and Housemarque was granting my wish. 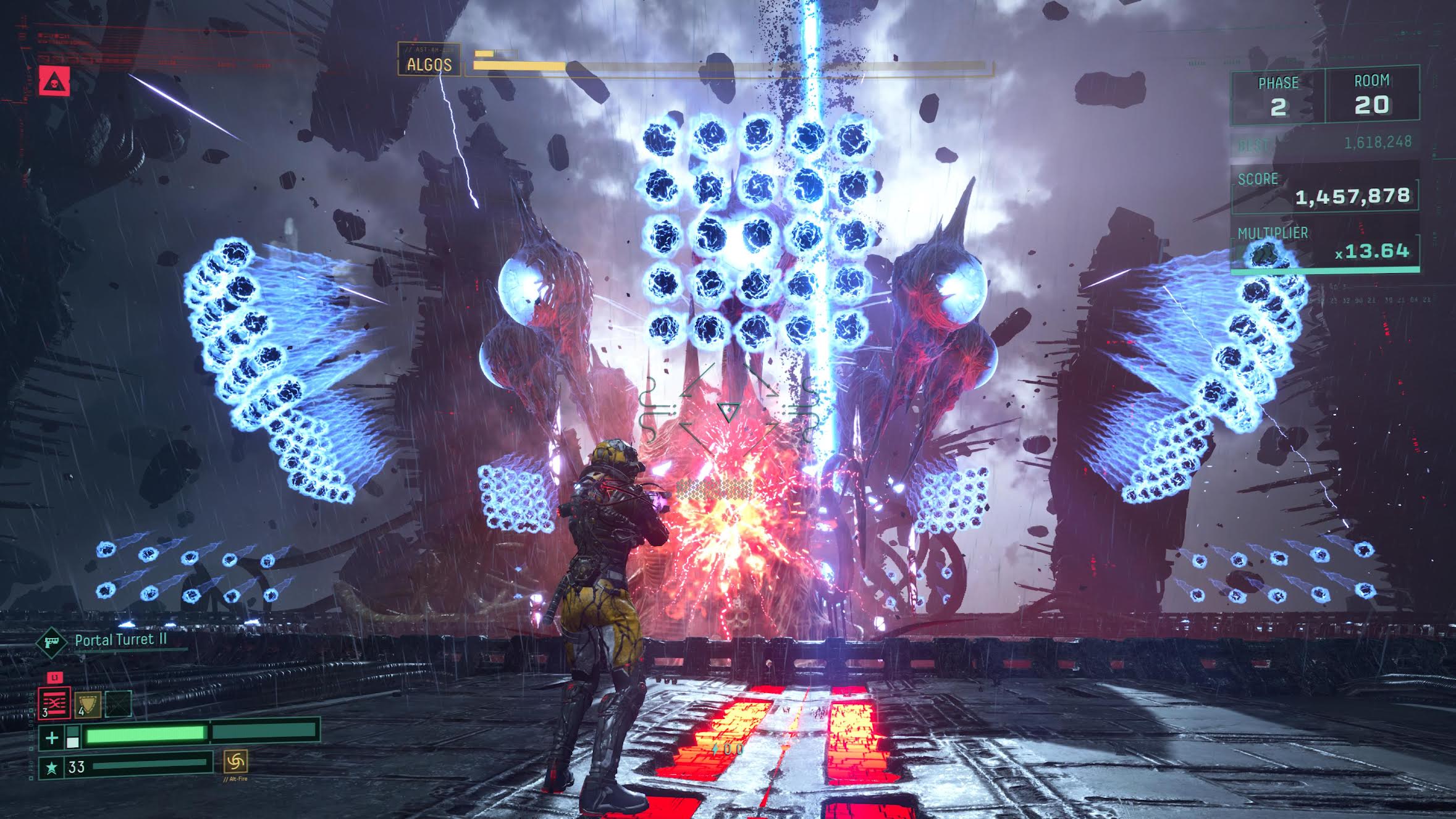 Having just played through the Tower of Sisyphus for around 6 or so hours this past weekend – and acquiring all the new trophies that were added specifically for this DLC update – I am happy to report that it doesn’t disappoint. Feeling like a warm blanket on a cold day, it took mere minutes for me to settle back into the mayhem, scouring for obolites to buy upgrades and going back and forth between my three favorite guns – the Carbine, Hollowseeker and Electric Pylon – to obliterate endless waves of enemies. To keep the player engaged to continue through this endless nightmare, you receive a total score of how far you got before death. This score is made up from how many enemies you killed, health used, how many versions of Algos you defeated, pace at which you cleared levels, etc. There is also a multiplier that can increase your score dramatically depending on how fast you clear rooms and move onto the next one. Another nifty add-on is online leaderboards, comparing how you are doing on individual runs with the rest of the world (I was at around 4800th place last check, so not great).

While 95% of the enemies are ones already found in the main game, they did throw in one or two here and there, specifically a new crab-like creature that totally owned me once or twice in my runs. However, the big addition enemy-wise is the new boss that awaits you at the end of each phase, Algos. A towering monstrosity with tentacles for days, he is the true epitome of what this game is about. Solid challenge, endless waves of fire, plasma and lasers that cover the room and a supreme blast to fight. You initially only fight one form/phase of Algos after the initial 20 rooms, but it adds a new life bar/attack patterns as you progress through the 2nd and 3rd phases. While I can’t report what happens from the fourth phase on – I have yet to reach him at the end of Phase 4… it’s hard – I would assume he tops out at three life bars but his attack patterns and aggressiveness would increase exponentially after each new phase. 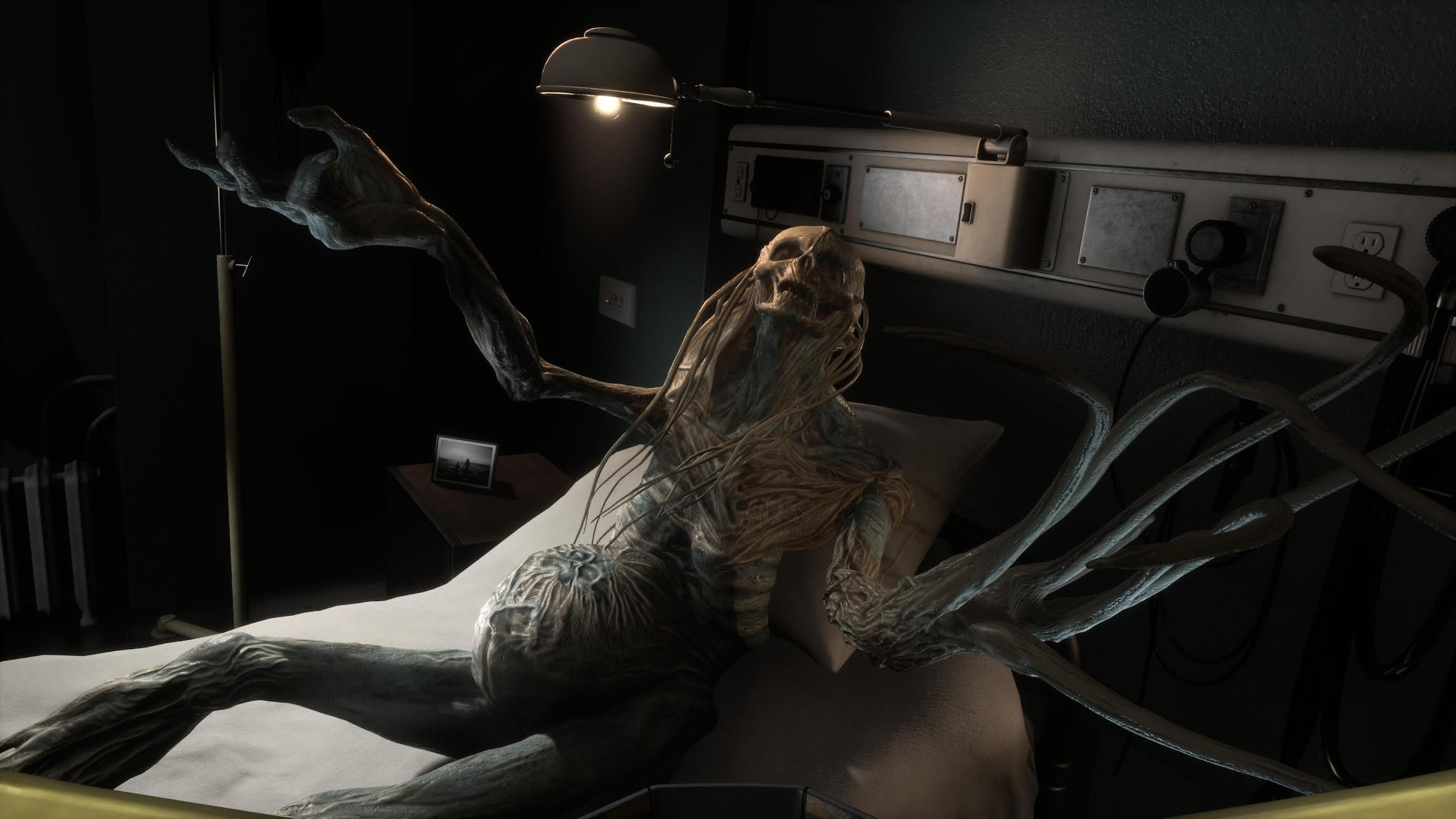 The most exciting part of the new DLC is, by and far, the new story content. Taking place primarily within a long hallway at a hospital, each of these sequences adds depth and nuance to the character of Selene and her relationship struggles with her own mother and child. It’s quite harrowing stuff and the vocal work from Canadian actor Jane Perry. Subtle voice increases/decreases, anger, despair and emptiness are all conveyed extremely well from the solitary dialogue that Selene mutters to herself, and it really adds a lot to the purposefully vague story elements present in the main game.

What else can I say? If you enjoyed Returnal, and all its bullet hell glory, then you will simply love this new expansion. The Tower of Sisyphus is an endless barrage of enemies for you to just take out ALL your frustrations on while still being a supreme challenge as you progress, the new story elements are exceptional and flesh out the tale of Selene, new enemies and a new boss in the form of Algos are always welcome, and even the online co-op added in for the main game works surprisingly well. I love this game so much – it was my GOTY 2021 – and any reason to hop back in is good enough for me.