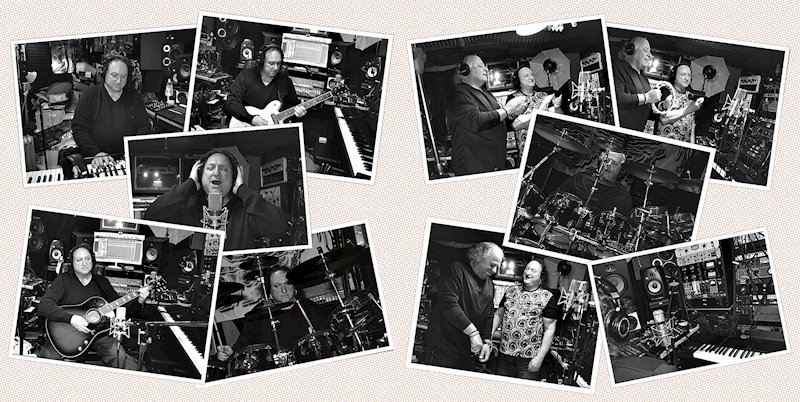 When asked to describe his band, Mark Bram said:

We have the glam and theatrics of Cooper and Bowie, the sophisticated rock of Queen, the power and urgency of early Zeppelin with the melodic prowess of early Beatles.

While my initial response to these descriptors was that they seemed a big grandiose and lofty, I think Bram nailed it. Of course, never claimed to be as great or important or influential as these all-timers, he simply used them to explain his influences and his sound. Yet, his comparisons to sound, style, and even songcraft are more than fair. In fact, fans if any and all of these greats are almost certain to find a new addition to their favorites once they give Ruby Topaz a spin.

Based on the above, it should be no surprise to hear that Ruby Topaz takes a decidedly old school approach the music. With Mark’s second love of Tai Chi Chuan martial arts in tow, there’s also a clear discipline in how the songs are built and the album is composed. The result is a meticulously constructed, guitar driven, 60s and 70s inspired foray into rock and/or roll.

While the entire album is a great nostalgic rockroll journey, it’s tracks like “You’re Still Running” that get a bit harder edged and druggy that appeal most to this rocker’s tastes. Bram’s signature vocals pair with powerful guitar work and the weirder, quirkier side of the band’s aesthetic to create some truly enjoyable psychedelic tinged rock that rivals the quality and sound of bands like Hawkwind or even late-era Beatles.

The long and the short of it is that Ruby Topaz isn’t breaking new ground, redefining genres, or setting new trends… but fans of classic rock and alternative music will find themselves really loving what Ruby Topaz has to bring to the table.