Despite some experience with bands of the Sunset Strip scene, this music and film nerd was new to the music and story of Ampage – though upon listening to them, some things sounded somewhat familiar and their vibe was entirely what I’ve come to expect from bands in that scene. Tight musicianship, a fast lifestyle, a familiar rock sound, the music and image conveyed by Ampage feels like what you’d expect. While their name may not be entirely familiar and their specific songs may be new, anyone familiar with the rock scene of the Sunset Strip will feel at home with Ampage. 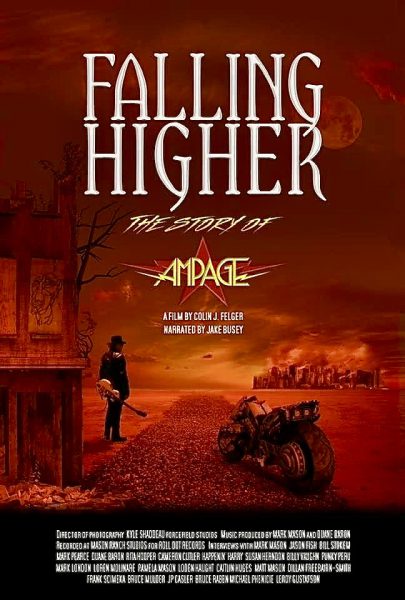 Felger’s documentary style is pretty straight ahead, highlight the band’s journey relatively straight forward and very easy to follow. We get to experience all of the controversy, all of the music, and all of the stories of Marc and the rest of the band.

In addition to the film, Ampage has released an accompanying soundtrack (with their brand new track “Sky is Falling” below). The entire soundtrack is available on Spotify and other streaming platforms now. While you wait to check out the film, whetting your proverbial whistles with the soundtrack will get you ready and give you a great idea of what you’re heading into.

In short, Falling Higher: The Story of Ampage is a solid watch for fans of music docs, fans of the Sunset Strip scene, and people who love rock and/or roll in general. Check it out this week if you fall into any of those categories!

And stay tuned later this week for an interview with Marc Mason of Ampage.