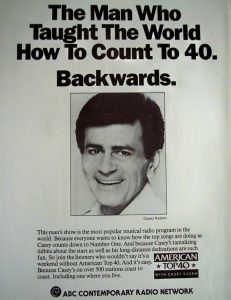 I’ve kinda mentioned my love for American Top 40 and similar countdown shows in previous Mixtape episodes. But maybe I haven’t emphasized that love enough. I mean…I kinda considered Casey Kassam a hero/idol I looked up to.

I dreamed of being a radio Disc Jockey. I would pretend to host my own radio shows. I was so excited when I learned I could drop the needle into the dead space between songs to cue up the right track. That was such a revelation to me… that you could select one song to play… that had to be how radio did it.

At one point, I realized that my radio with a TV band could pick up my walkie talkie. So I would put that radio in my brother’s room where he and other kids were playing Legos, and I would put a rubber band around the ‘talk’ button on the walkie talkie and set it next to the record player in my room, broadcasting my ‘oldies’ radio (they were my mom’s records) across the house. I would pick the walkie talkie up to announce each song and give my music trivia tidbits. I even held contests where I encouraged my brother and his friends to compete by running back to my room to answer questions and name-that-tune. 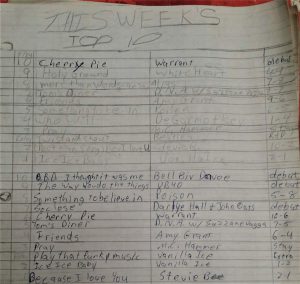 When I wanted to DJ more modern music, I would take the time to fast-forward/rewind a bunch of cassettes to the right spot to play specific songs. This was some time after I had quit broadcasting my ‘oldies’…when I was more into my CCM stuff, but I was imagining that Christian music had infiltrated the secular mainstream… just before Amy Grant and Michael W Smith went to number 1 in real life. I would actually make up my own top 10 list, and update it every week. My charts resembled the real top 40 charts, but they reflected my favorites and preferences, and included my favorite CCM songs. Every week, I made sure to take the time to actually pretend to record this chart for pretend broadcast. I would pull up all the songs on my cassettes, (most of the secular music was recorded off the real radio), and add my commentary as I played through them…just like my hero Casey Kasem.

Even up through high school, as I walked the halls between classes, and sometimes even daydreaming while in class, I would play radio in my head. I even came up with an imaginary station with specific shows at specific times, that I kept track of in my mind. I called my radio station Christian Rock Radio USA, and the morning show was the Morning Metal Crew, which was followed up by an Alternative show in the late morning, till noonish. By this point, I wasn’t as interested in top 40 radio as I had been as a kid. But it still reflected that childhood dream of being a radio Disc Jockey.

Well… now I’m 40 years old… and here’s my first public attempt at living that radio DJ dream. I feel like it’s a pretty “humble” start. It’s obvious I’m inexperienced and my nervousness comes through… but you gotta start somewhere.

This is only the beginning of what could turn out to be a long countdown show. I came across the top 100 songs of the first 55 years of Billboard’s Hot 100 chart: the chart that many of my favorite top 40 shows were based on back in the day. I thought it would be fun to record my own countdown using that chart, and I thought that it would be clever to countdown the top 55 songs on that chart of the first 55 years of the Hot 100. I only got through to number 42, and just under an hour of the show last Spring, and then I went back to work full time and didn’t have as much time to dedicate to this project. I might complete it sometime… or I might skip to the top 10 or 20 songs because the whole 55 would be a long process and a long listen. I suppose it might depend on how this initial attempt is received…

But here it is… my debut as a radio DJ… hosting the beginning of the top 55 songs of the first 55 years of the Billboard Hot 100 chart. Enjoy… or just laugh at it… but I’d love to hear what you think of it … maybe…