Screened at PUFF with this great short called MUTE, which you can watch the trailer for right here.

It’s hard to be overly critical about Bad Blood, as it’s a pretty successful schlocky monster movie. Your mileage here will vary depending on how on board your are for such a thing. For me, the characters just weren’t interesting enough to keep me invested throughout the runtime. And the movie seems to be aware that its premise isn’t quite interesting enough to fill an 80-minute runtime, as it introduces needless subplots that go nowhere like a private investigator’s psychosis.

There are some really worthwhile sequences in this though. In particular, the transformation scene is very well done and culminates in the best action scene in the movie. The rubber suit for the creature is absolutely incredible, the kind of thing you don’t see in modern movies at all anymore. And the scene directly following the transformation has some great effects and really fun, gory details.

That said – this is ultimately a 5-minute sequence in an 80-minute movie that never lives up to the promise of that scene. And that scene comes relatively early, so it feels like a promise that things are about to go off the rails and get crazy. But they never really do. Which isn’t really a bad thing, it’s reminiscent of the monster movies of yesteryear, but I guess in 2016 I’m looking for a monster movie to go a little further. 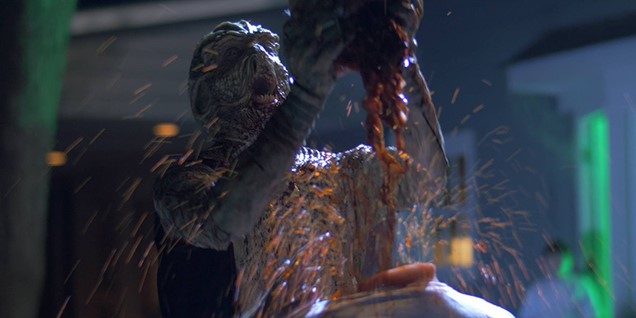 If a classic, schlocky, rubber suit monster movie is your cup of tea, I definitely recommend this. Keep your expectations in check and there’s a chance you’ll have a good bit of a fun with this. For me, it’s a bit underwhelming, but for you, you might find yourself satisfyingly whelmed.