Thanksgiving isn’t usually associated with having a wide spate of seasonal entertainment. It’s not Christmas, after all, or even Halloween, both of which are prone to month-long cable TV marathons and special theatrical releases. It’s a holiday that lacks the pomp and circumstance on a pop culture scale. As a society we’re content to gather together with family, throw football on the TV, and gorge on food.

Krisha fills a very large season niche by being Thanksgiving themed, but does so in a way that the warm-fuzzy feel-goods that trademark holiday cinema are ignored.

It’s a stark reminder that, for many people, the idyllic family gathering (gorging on turkey, mashed potatoes, and wine, followed by board games and general merriment) is a fantasy. That for some people, the gathering is a reminder of hurts, personal failings, and unspoken ultimatums.

It’s an important face to give to cinema. We like to paint holidays through the lens of the American dream. It’s an expectation based around success (not only that at least someone in the extended family is well-to-do enough to have a house big enough to host, but that everyone else has the ability to take off work and afford the gas to get there) and the idealization of the loving family.

Krisha tries to play into these expectations before turning them on their head, revealing the uncomfortable truth that the holidays can be a miserable experience for people, even those who have loved ones to visit. It’s a stark reminder that wishing someone a happy Thanksgiving with the idea of a happy time with family and food could very well be a misplacement of expectations.

LUKE TIPTON: Hey, happy Thanksgiving everyone. Hope you’ve all recovered from your food comas. Good luck with your Black Friday shopping (if that’s your thing), or not (if it’s not). So Krisha; what a wonderful little exercise in perspective-gaining. I was more apprehensive than usual about the annual minefield of Thanksgiving dinner conversation this year, given that the unthinkable has happened, and America has elected Donald Trump president. Watching this film was a nice reminder that things really are that bad.

Krisha is a very unsettling slow burn of family dysfunction and the destructive power of addiction. It’s an extremely confident, skillful debut film as well. Trey Edward Shults is a director to watch. There was a lot to admire here, including Krisha Fairchild’s great starring performance, and the use of the thanksgiving turkey as a visual metaphor. But two things in particular that stood out to me. First off, Shults’ uses a lot of long takes here to great effect. They ratchet up tension, following the chaos that Krisha brings with her into the crowded family gathering. These long shots aren’t gimmicks. They’re well played, and carefully orchestrated for maximum impact. After a brief prologue, the 7 minute continuous tracking shot of Krisha’s arrival at her sister’s home, and the introduction of all the major characters in the film, is particularly impressive. It was subtle enough too, that I had to go back and watch it twice just to verify that it was indeed a single, unbroken shot. Another thing I loved about the film was its ambiguity. Shults never gives us all of Krisha’s story. Nor does he tell us everything about the rest of her family. He slowly gives the audience pieces of a family history, and the rest is filled in by his actors. We don’t have to know everything about these people; they wear their history on their faces, and clearly carry the weight of it on their shoulders. And that is far more valuable to drama than any forced expository information dump. It’s a mark of Shults’s confidence and it pays off.

GARRETT SMITH: Wow – I was really taken with this film. Very powerful for a first time director. Not just in its execution, which it is and I’ll get to, but in its sympathy for the characters. I have no idea how autobiographical this movie is, only that most of the characters are played by Trey’s own family, who also wrote and directed the movie and actually stars as “Trey”. This leads me to assume it’s in some way autobiographical, though perhaps I shouldn’t be making assumptions like that. That being said, if it is indeed autobiographical, the amount of sympathy Trey has for Krisha and her struggle with an all too easily accessible coping mechanism is nearly heartbreaking in its own right, not to mention how heartbreaking her actual plight is and the horror it brings on their family.

And that’s really what I was so taken with here – in its opening half hour, the movie nearly plays like a horror movie. Though the camera is never used as Krisha’s specific perspective, it moves in just such a way that illustrates her discomfort, unease, and general distaste for the way people act in this family. The film never forgets how relatable these scenes are and is able to mine comedy from them while still depicting them as “the horror of family,” and more than that they help get us on Krisha’s side and help us relate to her and understand her perspective. And these shot choices continue to mimic her headspace as the film goes on, with a bravado shot of her paranoia kicking in that spins with her as she circles around the kitchen, going so far as to switch from (please someone teach me the appropriate terms for this) a boxier format to a wide screen format when she gets drunk, allowing us to watch as her perspective is altered. There’s even a crushing moment when we realize we don’t quite know how reliable this narrative is, as we hear a conversation with her sister twice, once in a sympathetic tone, once in an anger fueled rage, illustrating that once Krisha starts self medicating with drugs and alcohol her perception of events changes – again the perfect depiction of an altered perspective.

And to come full circle on this, that’s where the film really got to me – its depiction of addiction is both crushingly accurate and sympathetic. There is a love for Krisha, and not just the person she could be if she could get past her addiction, but the person she is even in spite of her addiction. It depicts her as a real person, with more than one dimension, that can’t be so easily written off or judged. The message of love at all costs, in the face of troubling resistance, and even in the face of what in some circumstances may simply come down to differing perspectives, is one that is so very important right now, and one that we often try to remind ourselves of on the Thanksgiving holiday, making this a perfect movie for this weekend.

Also – just to compliment some things I couldn’t find room for in the meat of the review – the sound design and use of editing is exceptional in this movie. I can’t compliment it enough on making the experience of an addict relatable. The way it bounces around showing us events that happened at different times, but all events that lead to Krisha’s building anxiety, is fairly accurate to the way anxiety actually mounts, especially for someone struggling to not go to a standard coping mechanism for help. It’s a continuum, but one that gets more rapid as you reflect on specific moments. And that opening shot, nearly 8 minutes in length, is truly incredible “show don’t tell” filmmaking. We learn so much about Krisha in that shot – the way her dress is stuck in the door of her truck, the cast on her finger, the amount of pockets that are open on her suitcase, the way she just crosses a stranger’s lawn. It’s truly awesome, and shows great promise for a first time filmmaker. 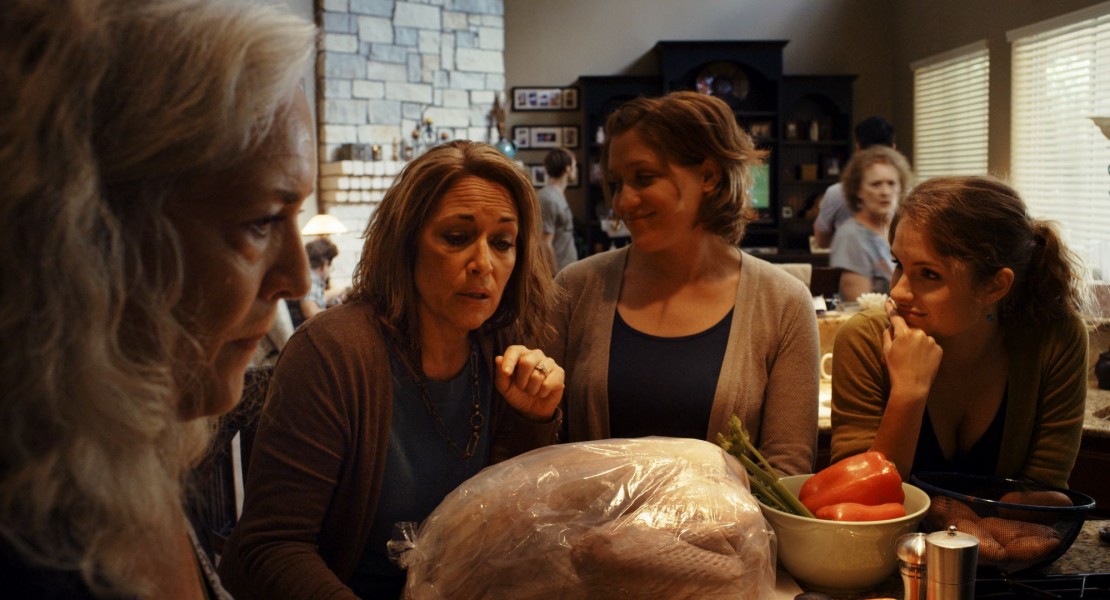 JUSTIN HARLAN: The secret to running a decent website is finding talented writers with interesting thoughts and getting the fuck out of the way. Today, I plan to make a few comments and do just that. I chose today’s film in honor of Thanksgiving, but Jacob’s thoughts were a perfect introduction, so we ran with that. As the anchor, I have very little to add that isn’t cover by Jacob, Luke, or Garrett (who wrote a dissertation). I will, however, make a few quick comments.

First, I absolutely love this film. It’s in my top 20 of the year for sure. Second, Trey Shults is brilliant and is certain to be a filmmaker on the rise. Third, modern horror filmmakers could learn a thing of two from this family drama’s use of tension. And, finally, Krisha Fairchild is revelation in every single way. (Also, check out producer Wilson Smith on the podcast.)

Happy holiday, friends. I hope it was better than Krisha’s or Trey’s. See you in two weeks, where we are hoping to have our first Friday Fight Live. Stay tuned for details!