Leto (aka Summer) was my biggest surprise of the festival. I never intended on seeing it at all and was originally planning on seeing another film that was moved into a different time slot. It was tucked away in the 10 am slot and with nothing else to do, I decided to check out this 2 hour plus biopic from Russia. If you know me at all, you know that I constantly bitch about runtimes being too long and despise biographical films. So I begrudgingly sunk into their comfy chairs and gave this black and white feature a chance. This film was immediately engaging, leaving me enthralled and tapping my toe throughout this visual feast of music and history.

Here is a very brief synopsis:

A love triangle emerges around a rock and roll musician, his protege and his wife in 1980s Russia.

The description makes it sound pretty “paint by number”, but it leaves out what I think is most interesting about this flick. Which is the constant shift between reality and fantasy. There are multiple scenes where we are pulled from the drab world of Communist Russia and then tossed into a fantastical version of reality where strangers sing and dance. These sequences also introduce a lot of partial animations and hints of color that punch up sequences that would have just been swallowed by the film’s contemplative pace. By contemplative, I mean slow but not in that bad way that I constantly whine about. These slow scenes give off a vibe, more than carry the plot. 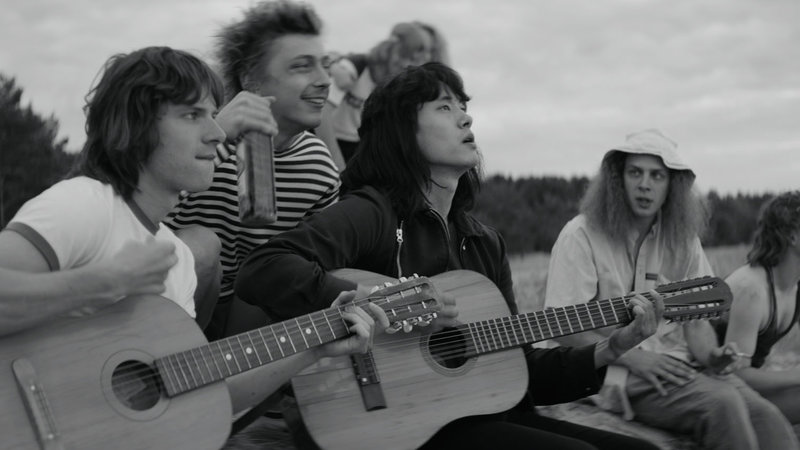 The story is simple, but the characters are not… and that is something that I love. Rarely do characters speak in certain terms and we see their true feelings play out during a prolonged walk around town. I may not be properly selling it with my description, but trust me that this is something that is hugely original and will open you up to an era of music that you are not likely familiar.