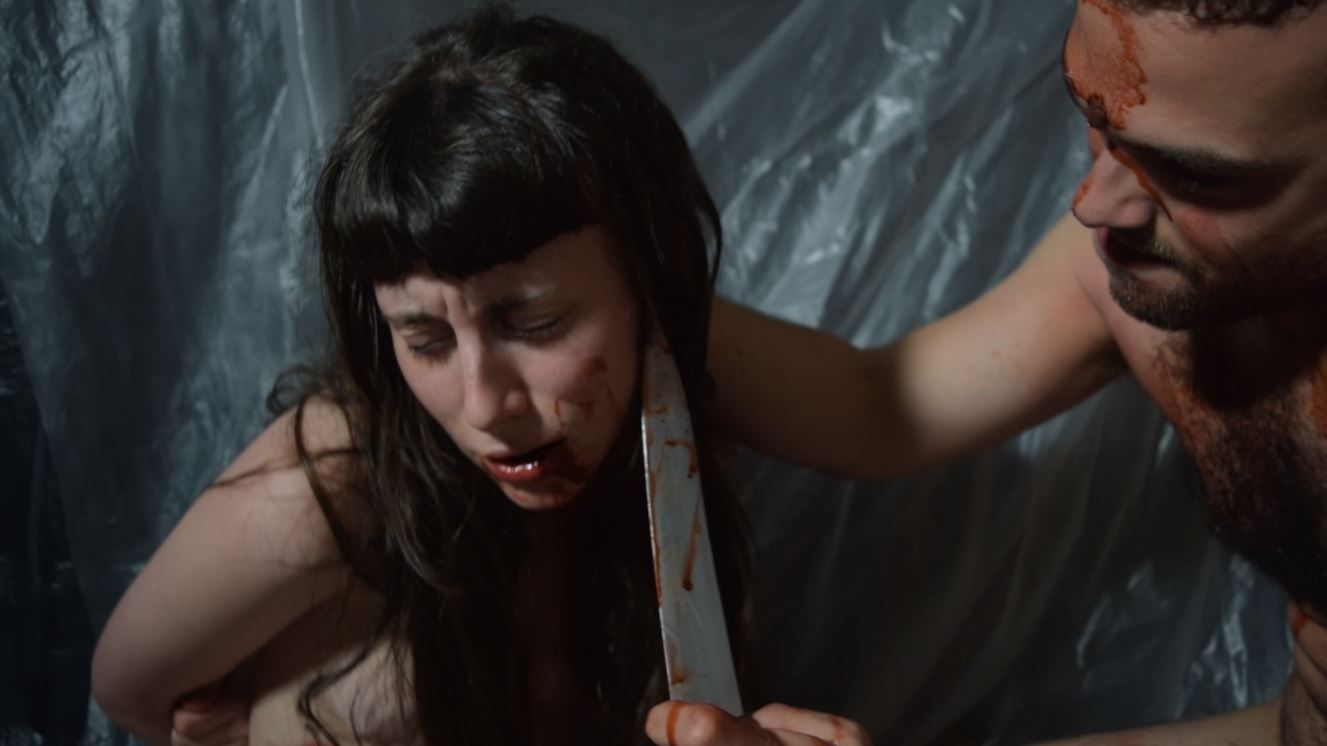 If the film label Unearthed Productions doesn’t immediately catch your ear, this may be your warning to turn back now. Famed for their uncompromising devotion to film extremity and notorious Serbian Film ties, they are once again making a fitting home for a viscous fever dream known as House of Flesh Mannequins. Released originally in 2009, the film was originally apart from the Dimension Extreme line but faced many cuts. Now thanks to Unearthed, the un-compromised, un-edited, “master-extreme-directors-cut” is being made available on Blu-ray. And what a sick and twisted vision it is to behold!

Caught in the art house fever dream of a loner named Sebastian (Domiziano Arcangeli) there an immediate shroud of darkness as we learn Sebastian is a cameraman. The camera is a very important part of his life, it has been both his abuse and his salvation. As a curious girl next door named Sarah (Irena Violette) to take an interest in the man next store, she begins to uncover disturbing secrets Sebastian has never told anyone. His father sexually abused him, he has the footage of it. Disturbed but compassionate, Sarah insists Sebastian is a good man. But if the surreal portraits of incredible violence not just in his head but work were revealed, what would she think of him then?

Sebastian’s waking nightmares are captured in a hellish fever dream that draws a tragic connection between love and violence. Sarah satisfies every fantasy of a common man, yet Sebastian is no common man. His perversions informed by his abuse lead him to question how she could satisfy him, how any woman could. In his dreams he enters his House of Flesh Mannequins where he visits his true lusts, contained effigies of incredible sadism and his films reflect the closest reality he can muster for his fantasy. But what if, what if Sarah too felt the need to shed her skin and bleed her heart into a man’s hands?

Blending a hyper-erotic atmosphere around acts of incredible sadism, House of Flesh Mannequins features a variety of extreme sex stunts captured on Sebastian’s camera; sounding rods, blood play and genital torture. His work as an underground pornographer cues up several visceral montages akin to an August Underground reel. Yet wrapped around the showcase of extremity, the film remains defined by its raw art house stylings that add substance to the blood show. Blending Sebastian’s psyche with his abhorrent reality, it becomes hard to distinguish what’s is real and what is not. Just as he questions his reality, he questions Sarah’s ability for love and the film explores if abuse can be healed by it.

Rumored to be an influencing film for A Serbian Film, there is definitely some distinct style featuring the mix of hardcore pornography and arthouse stylings. However, that’s all the better. For those unfamiliar looking into the extreme genre can often be seen as akin to pornography, but while countless examples of bad rip off and lazy shock artistry certainly run amok it’s films like House of Flesh Mannequins that remind of the often unspoken artistry that makes these films so unique in the first place. But with that said, brace yourselves because this isn’t just unrated, it’s the Master Extreme Directors Cut coming to you on Blu-ray. And boy oh boy does it live up to its title.