This marks the second film I’ve watched from the newly released Nikkatsu Diamond Guys Vol 2 from Arrow Films, and this fared much better for me than Murder Unincorporated. Directed by Buichi Saito (Lone Wolf and Cub: Baby Cart in Peril), Tokyo Mighty Guy is a strange amalgamation of genres including musical, gangster, and romance that amount to a messy narrative with a decent morality tale and call to action for men.

The movie opens with a musical number (these occur rarely and at random, with characters only miming some of the words they’re supposed to be singing) that is supposed to set the stage for the story – a young Japanese man named Jiro goes to France to be educated, only to return home to continue working in his parents restaurant. It was a very confusing, cheaply made opening that ultimately has little to do with the film. I only caught up with the details of what the song was trying to tell me later in the movie, when it just explains them again (like 4 more times). From there we’re introduced to an ex-Prime Minister (I think – people treat him like he’s still in power but I’m pretty sure they specified he no longer holds that position), the Typhoon Club, a group of gangsters that “offer protection” to Ginza, the town where Jiro’s parents restaurant is, and Hideko, a local girl who works in the bathhouse, is secretly in love with Jiro, but is arranged to be married to a rich man from another city. As the movie progresses, these stories intertwine with each other in seemingly haphazard ways, always resulting in Jiro having to use his inherent charm, good looks, quick wits, and “fighting skills” (I state it vaguely and in quotes because this only ever amounts to him throwing people) to combat whatever ills these characters are either facing themselves, or bringing upon Ginza.

I previously stated that the plot is seemingly haphazard – this is because about halfway through the film, a solid and concrete plot is finally introduced that weaves all of these varying elements together, and does so without sacrificing the weird, lighthearted tone of the film. Suddenly what seemed boring and meandering has purpose, and the culmination of all these events becomes intriguing and exciting. To keep it spoiler-free I’ll just say that Jiro ultimately wins over most of his enemies only to discover larger and more sinister adversaries that will require him to team up with his former foes in order to be defeated.

What I really liked about this film is that although Jiro is sort of an Ubermensch, it’s mostly about him being called upon to go above and beyond even his own standards and morality. He has to learn that being a man isn’t just about being his own man, but recognizing the need to stand for an ideal greater than himself. And I like that he’s imperfect too – I know I said he’s an Ubermensch, but he’s aware that he’s desirable and “perfect” and will sometimes treat people callously because of his self-perceived status, which means he has lessons to learn as well, like humility. It all adds up to a rather entertaining tale about manhood and sacrifice, and I think it has valuable lessons to impart to its audience.

It’s also pretty silly – like I said, people break out into song at random, there are fight scenes that have zero fight choreography and instead just have people running at each other and then being thrown, and there’s a joke or two that legitimately hold up as well. There’s also a ton of great, unintentional comedy that comes from just weird choices like a slap fight that breaks out in the bathhouse, or the ex-Prime Minister showing up to a battle with a spear that he clearly doesn’t know how to use. When a fight breaks out in Jiro’s restaurant, the closest we get to choreography is Jiro hitting guys with a frying pan, and there’s clearly never any contact made, yet a loud “Clang!” sound effect occurs with every swing (and literally the exact same sound effect too – it’s hilarious). 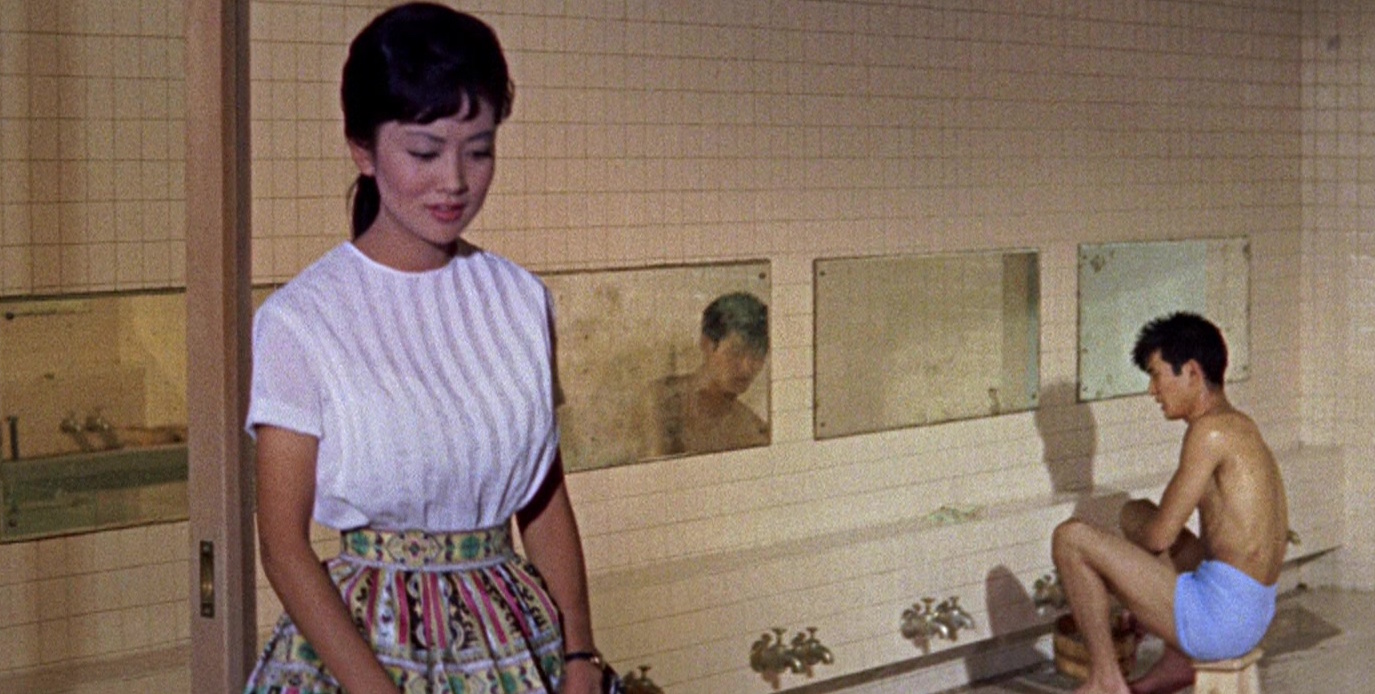 So while I’m still not sure what appeal these Diamond Guys movies might have today, this was at least a somewhat sensible film that had a little something on its mind that eventually got me invested. I wish the movie felt like more of a whole and not quite so messy, but perhaps that’s one of the marks of a Diamond Guys film – discovering the story as you tell it. And this one had some cinematic bravado to it as well – there are some really beautiful shots throughout the movie, some really dynamic shots to convey the action (since the actors aren’t really conveying much with their non-choreography), and some really interesting lighting choices (I’m thinking of the camping scene on the lake that takes place at dusk). All in all, I enjoyed Tokyo Mighty Guy more than I thought I would, though I think you need to be a particular kind of movie goer to really love something like this – a kind of movie goer that has either long since passed or has yet to be discovered. I would say only time will tell on that, but it’s had a good 50 years to make its splash. Perhaps this Arrow release will help those intrepid weirdo’s that have been desiring exactly what this has to offer find their masterpiece.