Ken Russell’s 1971 beautiful and subversive blend of high art and trash cinema, The Devils, is back in the spotlight for cinephiles, horror hounds, and other various tribes of film geekdom. This is because AMC’s streaming horror service, Shudder, released the film’s “uncut” version into their catalog this week… except that it’s not the uncut version at all. It’s indeed a lesser available version than the 103 minute version that was one of the only previously released versions in the United States, but it’s runtime is 109 minutes, 8 entire minutes less than the longest known available version at 117 minutes (known as the “restored cut” in most available literature on the film). For what it’s worth, there has also been long rumored an original 158 minute cut, but chances are the cuts from 158 to 117 were more trimming the fat than censorship objectionable material, albeit I’m sure if this version does indeed exist, there is certain to be at least a bit more content of a graphic nature. Nonetheless, users of the much lauded and well-curated AMC horror service can readily jump into the 109 minute cut without having to seek out a hard to find copy.

(Warning: Before you scroll any further, there is a screenshot containing nudity from the film’s most infamous scene) 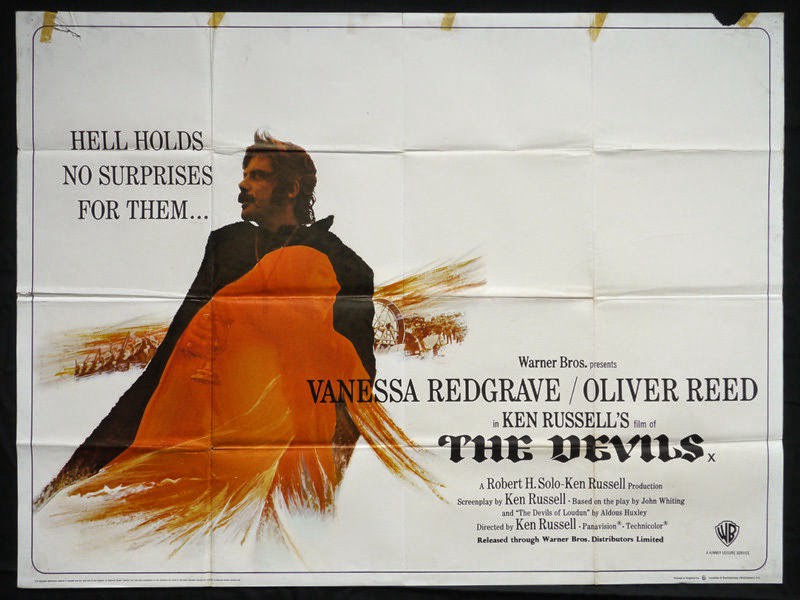 Why this film been censored and banned throughout much of the known world is less about graphic imagery alone, but rather about graphic imagery juxtaposed to holiness and how the film subverts and conflates the two. What is truly holy and what is truly profane is certainly up for debate in this film that features a hero priest who will fuck anything that moves. Sex is a weapon. God is a weapon. The players here are all living in the gray; no one is wholly good or bad, black or white, sinful or holy. This film is blasphemy of the worst kind, in the eyes of the Roman Catholic Church. However, for me, an anxious and rabid film horror fan that’s always looking for deeper meaning and hidden layers, this film is blasphemy of the best kind.

Art which presents side-by-side the sacred and the profane is almost always a successful exercise in deep and meaningful commentary, for me at least. As one who has wrestled with the relationship between my personal faith and the Church, I find myself drawn very specifically to such art. A favorite band of mine, longtime melodic hardcore/emo stalwarts BoySetsFire, tackles this relationship in so many of their songs, for example take the opening verse of “Heads Will Roll” from While a Nation Sleeps:

Or, look at one of my favorite hip hop acts of the past few years, Run the Jewels, whose extremely socially conscious and equally melodically infectious “Close Your Eyes (and Count to Fuck)” features the following bars:

Conditions create a villain, the villain is givin’ vision
The vision becomes a vow to seek vengeance on all the vicious
Liars and politicians, profiteers of the prisons
The forehead engravers, enslavers of men and women
Includin’ members of clergy that rule on you through religion
So strippin’ kids to the nude and then tell ’em God’ll forgive ’em

Naturally, then, a film like The Devils draws me in without ever really having to try. The basic plots is as follows… Father Urbain Grandier is a French Catholic priest (and based on a real historical figure, mind you) who couldn’t give a single fuck about his vow of celibacy, but is otherwise a good and fair priest. He truly cares about his parish in the town of Loudon, which he basically takes charge of when the governor passes away. When he refuses to become the local convent’s spiritual advisor and leader (as requested by the hunchback head nun who can’t stop daydreaming of all types of sexually debaucherous acts to indulge in with Grandier), she and several other nuns begin to accuse him of witchcraft. The Cardinal, whom already has major issues with Grandier due to Grandier’s public refusal to put up with some of the Cardinal’s bullshit orders, orders a witch hunter to go investigate.

Let me take a little step back and talk about religious horror and where it fits into my thesis from last week that I’m drawn to these darker and sleazier genre films due to my faith rather than in spite of it. Often the subgenre most under attack by the Christian community, especially the Evangelicals, religious horror is condemned as blasphemous and profane. As noted above, there is most certainly an element of the profane. In fact, there is almost always a strong vein of blasphemy running through it, too. So, in this regard, the Christian/Evangelical community isn’t wrong. However, there’s often something much deeper going on. The blasphemy, therefore, serves a purpose greater than simply a middle finger in the face of the Almighty. It is for the deeper meanings and themes relating to spiritual growth and spiritual warfare.

So, returning to The Devils, it surely does feel like some of the profane imagery is for shock value, yet I think it also does a phenomenal job of demonstrating just what is at stake. The most infamous and most painstakingly blasphemous scene is the “Rape of Christ” sequence, where the orgy of nuns literally rapes a large crucifix hanging on the wall. It’s undeniably and unabashedly one of the most profane images in modern film up until that point. It remains potent, even if not as shocking as it once was (I had built up my expectation of its shock value far too high due to its infamy and was less affected than I’d thought I would be, personally). This point of climax in the film (pun intended) serves to show the mass hysteria that has run amok the convent. A few nuns hellbent on destroying Grandier somehow create a Groupthink like wave of debauchery that grows to these insane proportions.

Equally shocking in image and even more shocking in content are the “exorcism” practices used to “cure” the “possessed” nuns. Here is where the dichotomy is set up for me. It is seeing the supposed “good guys” there to take care of the witchcraft of Grandier “in the name of God” doing vile awful things, despite seemingly knowing that the practices are bullshit and the “cure” is purely psychosomatic. Pile this onto the fact that Grandier has been busting his ass throughout the film to defend Loudon from being overrun by the government, where the Baron has orders to destroy the city. Grandier’s inability to keep it in his pants is obviously not that big a deal, all things considered.

The hero figure of Grandier is a vow breaker and philanderer, which blurs lines a great deal on how one should feel about him. However, that’s part of the takeaway. Heroes aren’t perfect. Men of God can have deficits. Despite his inability to say no to sex, Grandier is the most loyal to his God and his people of any of the priests or government leaders in the film. This type of jumbled mess of what is right and what is wrong isn’t what we want life to be, but it’s what life really is. Perhaps Grandier isn’t so much a blasphemer as he is just a bit of a heretic… and, to me, that’s no insult because most reformation of the Church and most of the social progress made in or by the Church began as supposed heresy.

Wrapping up this appropriately jumbled mess of an article may be a lot like the blurred lines in The Devils of what is good and what is bad. The movie is unpleasant, but beautiful. It’s based on a book that’s based on a true story, meaning it’s not exactly what happened, but the unpleasantness is grounded in truth, which is also beautiful because truth is beautiful. That dichotomy of the film, of Grandier himself, ugliness and beauty, is so much of why this film is such an important one and why I’m drawn to it.

Now that it’s readily available, I’m excited to dive back in, analyze this film deeper, and further challenge my conceptions of good and evil. And, if for not other reason, I’ll rewatch because Oliver Reed is the man! I welcome you to join me… prayerfully, of course.