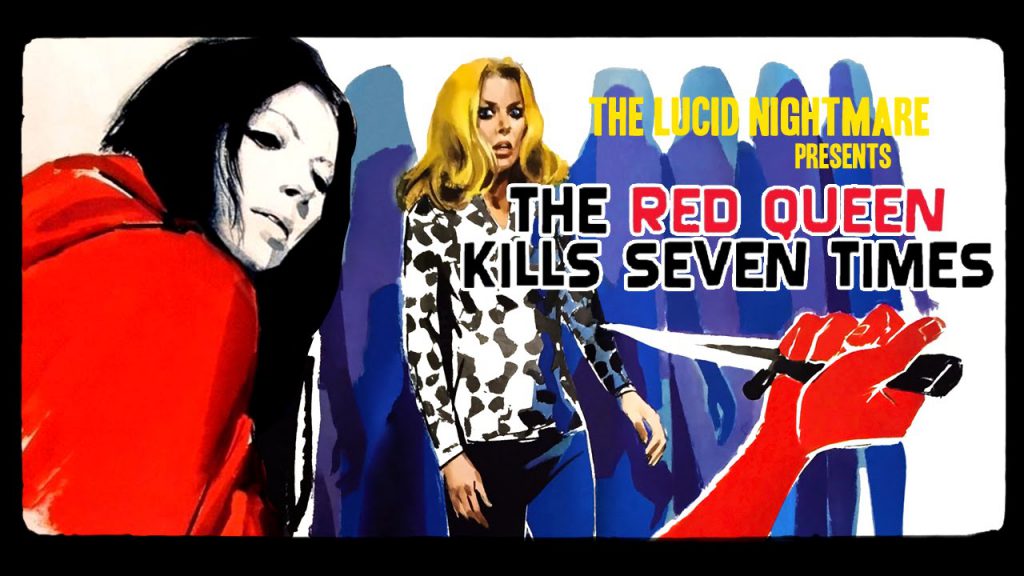 Whoever said seven is a lucky number, is dead wrong. An old curse lay upon stunning sisters, Kitty Wildenbrück played by Barbara Bouchet and Franziska Wildenbrück also played by, Marina Malfatti, as they inherit there family castle. A mysterious person dressed in a red cloak, is killing off seven victims, for the amount of times she was stabbed. The grandpa is the first to bite the bullet. The viewer is left to wonder, who the killer is. Is it a ghost, one of the sisters slowly creeping into insanity or is it there imagination?

The Red Queen Kills Seven Times was filmed in Munich and it shows. The landscape and the scenery are simply marvelous and breathtakingly stunning. The scenery and locations lend itself beautifully to fully show how gothic and grander, the film is. A lot of detail is based around the scenery, as the film is very gothic; the film maker’s utilized it fully. This film makes the location and scenery, feel authentic and very grand. Also noted for excellence, is the score, done again by Master Bruno Nicolai. His score is absolutely perfect for the film, without the score, this film would not have the truly horrific scenes that need to be seen and not spoiled.

The acting, done by the sisters is also fantastic; you can tell they really studied what goes into a role like this. They played terrified and innocent victims really well; there acting also remains authentic, all through the terrifying grand finale that will leave viewers gasping!

Arrow Video delivers again. The restoration is beyond perfect. It has stunning picture and very crisp audio. There are interviews with the cast, including film icon Sybil Danning and other interviews as well, with the cast and crew involved with the film. All interviews are at least over an hour and very much informative. Also noted, is a commentary from film critics, Kim Newman and Alan Jones. This commentary was actually very knowledgeable and informative, fans should take a listen.

Overall, I would say purchase this Blu-ray in a flash. It has a creepy killer, suspense, mystery, beautiful gothic scenery, chilling performances, a scary dream sequence and even a bloody grand finale!