Herschell dipped his toe into mixing comedy and gore over his last couple pictures, perhaps not intentionally, but with positive results none-the-less. And those results convinced him to start attempting to mix more humor into his films while still trying to out-do himself on the gore front. Will this new, more comedically-aware approach yield the same positive results?

On the Arrow Films HGL Feast Box Set, Herschell claims that, much like Blood Feast began the tradition of gore in American cinemas, The Gruesome Twosome is considered to have begun the tradition of mixing humor with gore. While I would say this is something that he’s been doing all along, it turns out it’s not something he’s ever done intentionally up to this point in his filmography. And with the intent to make us laugh comes to inevitable disappointment of the audience – this doesn’t work on the humor front, really at all. It’s simply too slow and boring, with no interesting characters to hook you into its premise, for any of what he submits as “jokes” to work. But the gore – good god, the gore – is absolutely wild in this, a huge step up from his previous efforts.

So what is The Gruesome Twosome about? Are you ready for this? I shit you not – it’s about one wig telling another wig the story of how it made it onto its mannequin’s head. For clarity, when I saw wig, yes, I do mean a hair piece. And when I say mannequin’s head, yes, I do mean a styrofoam head used to display wigs at a shop. So yes, the opening shot of this movie really is two fake heads wearing fake hair talking to one another. We never return to this shot, so it’s just a bizarre framing device that I assume is there to cue you into the fact that this is supposed to be comedic. But the only thing comedic about it is just how fucking absurd a premise that is. 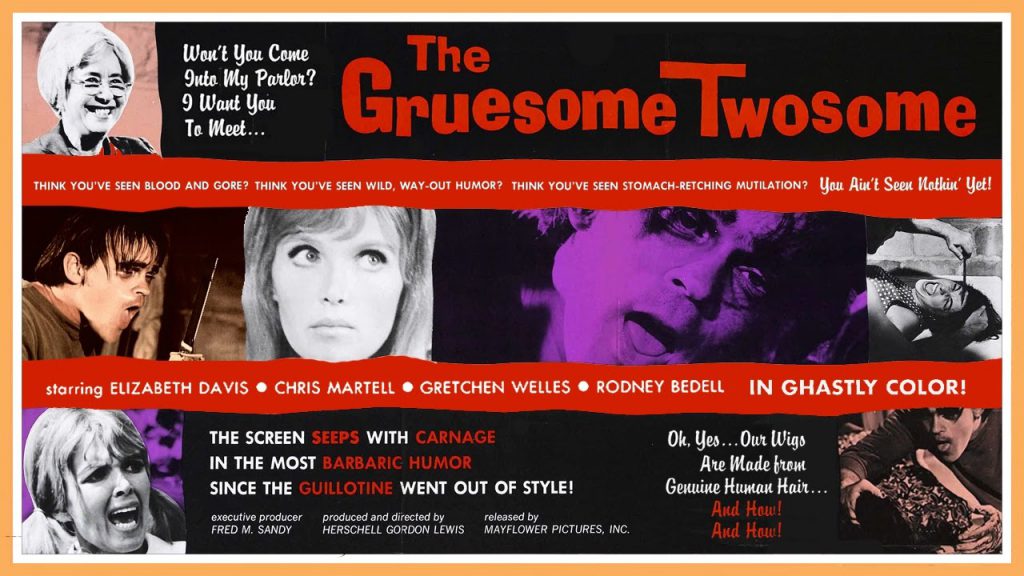 The Gruesome Twosome that the title references aren’t in fact these wigs, but they are introduced as soon as we cut away from this bizarre opening that we’ll never come back to – Mrs. Pringle (Elizabeth Davis) and her mentally challenged son, Rodney (Chris Martell) run a Wig Shop that advertises “100% Human Hair” and also offers rooms for rent. It’s quickly revealed that there are not rooms for rent here, but one room that Mrs. Pringle will shove unsuspecting, apartment-hunting young women into so that her son Rodney can murder and scalp them, fueling their business. The first scalping occurs about 8 minutes into the movie and it is BRUTAL. The make-up effects here aren’t great, but they’re ridiculously effective, and Herschell just lets the camera linger on it for SO LONG. This sequence seriously goes on for so long, from such a direct, disturbing angle, that despite the somewhat laughable effects process they were using to achieve this, I was utterly disgusted. This is the first time in HGL’s filmography that his gore has viscerally effected me.

From here we move to Kathy (Gretchen Wells), a sweet, ditsy college girl, introduced with a theme that sounds almost identical to the James Bond theme, who has an obsession with local crime and mysteries. She’s forgotten three dates with her boyfriend this week due to her preoccupation with the girls that have gone missing from campus in recent days. Her boyfriend remarks “Kathy Baker, girl detective – how’d I ever get mixed up with a female James Bond?” confirming that we did in fact hear a Bond theme ripoff just seconds before. Her investigation then truly begins back at her dorm, where she and her dorm-mates are having a pajama party and dancing to surf rock while eating the biggest buckets of Kentucky Fried Chicken I’ve ever seen for no less than 7 minutes of screen time. It’s easily the funniest thing that happens in the movie, but only because it’s so patently absurd.

From here we bounce back and forth between more murders and Kathy’s investigation. Her first suspect is a local custodian whom she suspects because “he seems like a killer, doesn’t he?” We’re then treated to a scene where she tries to secretly follow him home (a variation on Herschell’s classic foot-chase scenes) that lasts longer than the entire first act of most movies. She discovers the man burying bones in his backyard, but when the police arrive to investigate, he explains (in a seriously bizarre, fake Swedish accent) that this is how he celebrates his dog’s birthday every year – by burying bones in his backyard for the dog to find and dig up, and now Kathy has ruined the celebration. This movie can actually be hilarious, but only in its pure absurdity. And if you don’t think that’s absurd, you try making an 80-minute movie where you straight up waste 25 minutes of screen-time on a bad lead and still have it be considered a classic of its genre. 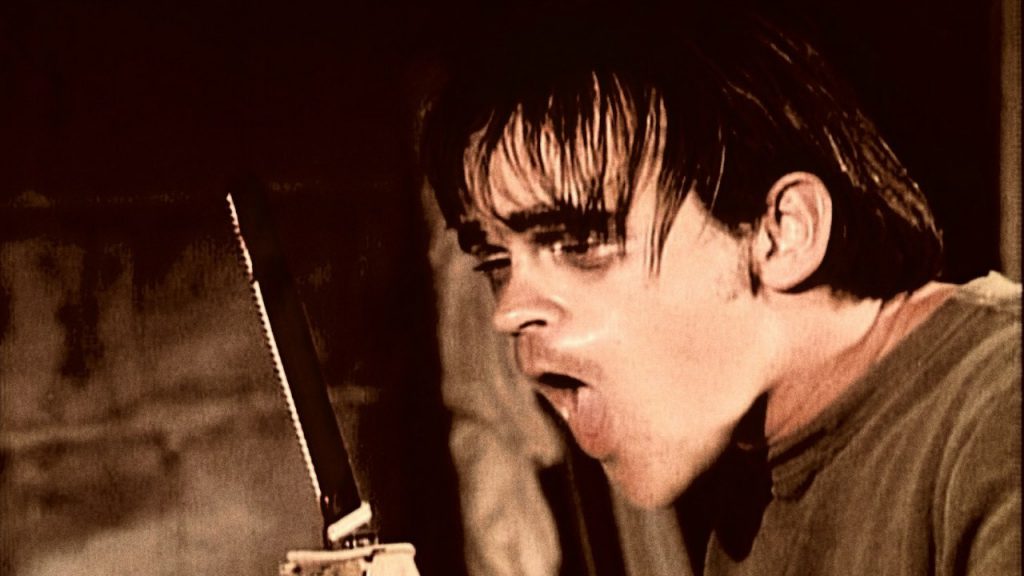 The murders we see interspersed throughout the investigation get more grisly each time. One of them features Rodney decapitating a woman with an electric turkey carving knife, from which we hilariously smash cut to college kids playing surf guitar on the beach. The effects for this murder are far better than they are for the scalping we saw previously, but HGL doesn’t linger on this like he did the scalping, rendering the scalping somehow more gruesome. Another murder has Rodney cutting a girl in half at the waist with a machete – there’s a great effects shot here where Herschell pans the camera up and down her body as she’s being cut in half, and we can see her upper-half screaming and flailing, while her torso is being cut apart and dissected, and her legs are lifeless. It really looks like the actress is being cut in half thanks to some crafty dummy work and a hole in the table she’s supposedly laying on – I love these kind of simple practical effects. And goddamn are they effective here – at a certain part Rodney starts pulling organs out of the body and slowly inspecting them, and HGL just lets his shot linger on this, eventually slowly pushing in closer and closer to the open wound in the girl’s stomach until finally letting the camera go all the way inside, thus creating a fade to black. It’s incredible and absolutely disgusting.

Eventually Kathy’s own dorm-mates start becoming victims of the Pringles, which finally leads her to the Wig Shop to confront them. These scenes are more boring than they have any right to be. Mrs. Pringle is a humorous presence to some extent, thanks to Davis’ charasmatic portrayal of the way she’ll constantly call out to her dead, taxidermied cat Napoleon, but the whole movie grinds to a halt when she and Kathy have to try and outwit each other. It’s just not all that interesting, and none of it is executed in any remotely believable way. At one point, while Kathy is trapped in the back room with Rodney, about to meet her death at his hands, Mrs. Pringle and two police officers are just on the other side of a thin, wooden door that separates the room they’re in from the one Kathy is screaming her goddamn head off in – and no one seems to notice at all. There’s no tension to these scenes, only frustration, and that’s where the movie leaves you. Frustrated rather than laughing, disgusted, or intrigued.

Before I conclude this review, I’d be remiss not to mention the movie-within-a-movie that we’re presented here. At one point, Kathy and her boyfriend go to the drive-in to catch a movie, which we get to see a few minutes of. It’s an argument between a man and a woman who appear to be out to dinner – we only see their torso’s for the entirety of the run-time, so it’s hard to say. The camera is focused on their hands, as the woman attempts to ask the man why he’s grown so distant, and instead of responding he picks up various food items and noisily chomps on them. At one point, he grabs a handful of potato chips, and she reaches out and grabs his hand in a desperate attempt to get him to pay attention to her, but in doing so he crushes the chips in his hand, and at this, he slaps her. He then immediately goes back in for another handful of chips which he readily shoves into his food-hole and through that mountainous mouthful of food he finally blubbers “I love you.” It’s honestly the most memorable thing in this movie, mostly because I don’t understand at all what HGL is trying to say about the state of movies and media in the late 60s, but I have to imagine that’s what this was a swipe at. And wrestling with what the hell he’s getting at with this hilariously bizarre short is far more interesting than the movie it’s inside. 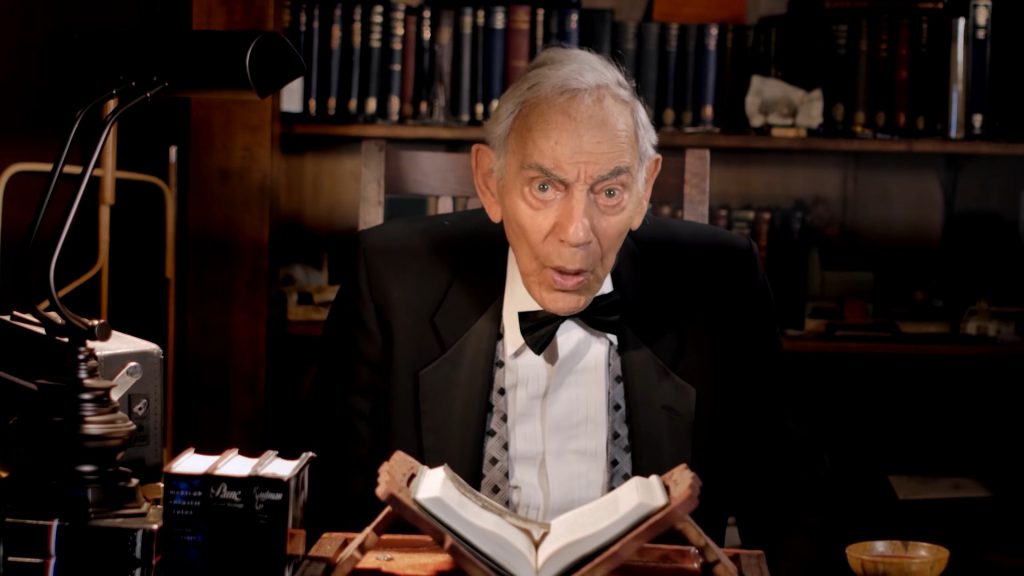 Unfortunately, Herschell’s direct attempts at humor mostly fall flat here, and when coupled with this script that lacks any real tension, we’re not left with much to enjoy here. I’m grateful to this movie for supposedly starting a trend of combining humor and horror as that’s become a regular staple of American film output, and one that I’m quite fond of. But this is rather disappointing, especially on the humor front. On the gore side of things, it is absolutely spectacular and a huge moment of growth for HGL. But he never makes that splatter matter here, and I think if this series has proved anything so far, it’s that splatter is meaningless in and of itself. It requires a little something extra, be that a good joke or an ironic twist of fate, to become an entertaining addition to any story. So please, do us all a favor, and grab your favorite gory movie off your shelf this week and sacrifice it to the movie gods in hopes that Herschell might return to our premise in the near future – that Splatter does in fact Matter.