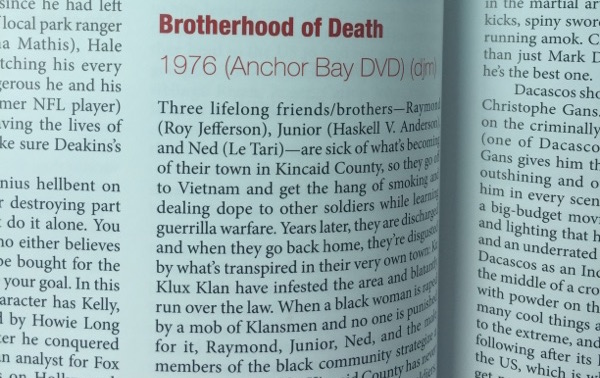 Yesterday was July 4th and few things scream America’s independence more than a nice action movie or 3. Bombs bursting in air… rockets with their red glare… guns, explosions, blood, guts, boom! It’s hard to think of something more American than blowing shit up, kicking some ass, and taking some motherfucking names! 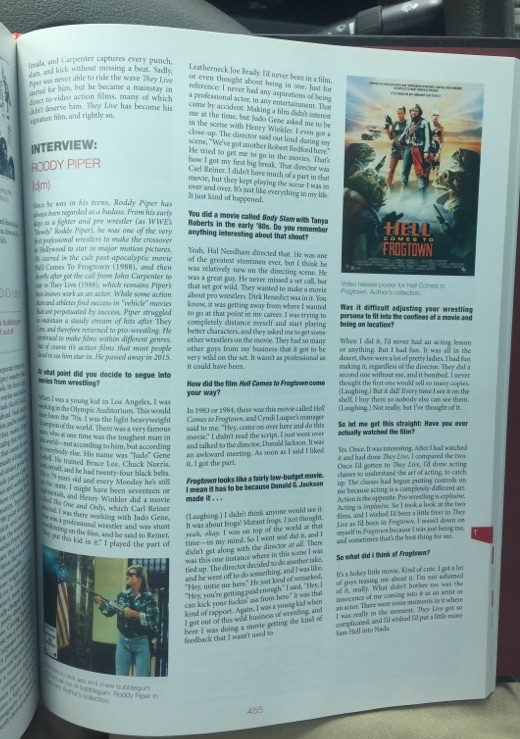 Of course, in order to decide just what explosive thrill ride to thrown onto your TV, couldn’t you use a guide of some sort to give you some ideas? And, after watching, wouldn’t it be great to read interviews with the stars and see what other films they are in? Of course it would!

Enter David J. Moore’s The Good, the Tough, and the Deadly: Action Movies and Stars, the ultimate coffee table book for action movie nerds like Cinapse‘s Ed Travis, my fearless leader at the site I write most for besides this one. It’s stellar and I had the chance to catch up with David about the book a bit.

A bit of an excerpt on a favorite blaxploitation action film is pictured at the top of the page. It’s a great example of the kind of random film you can find in this book. One of my favorite action stars was always the great Roddy Piper, whom I still mourn to this day. A snapshot here shows some of the great info on the WWF/WWE’s greatest villain of wrestling’s golden age.

[This book] was a project I thought of during the writing of my first book World Gone Wild: A Survivor’s Guide to Post-Apocalyptic Movies. As I was writing reviews for post-apocalyptic movies like The Terminator, Hell Comes to Frogtown, Cyborg, and things like Future Kick, I realized I really liked writing about movies with real-deal action stars. There was a common denominator there. Guys like Arnold Schwarzenegger, Jean-Claude Van Damme, Roddy Piper, and Don “The Dragon” Wilson all had something in common, and that was a physical prowess and extraordinary ability that could be fairly easily defined. Once I wrapped my head around that, I realized a book about all these guys and their movies had to be written.

The fascinating look at action stars of all levels of popularity is penned by an equally fascinating man, whose favorite films aren’t even ones that would fit in this book: Romancing the Stone and The Thief of Baghdad (1940). In the book, though, he also has some favorites:

Some of my favorite movies in terms of my book about action stars are probably Gymkata and the American Ninja franchise. I watched those movies A LOT growing up. When kids in the neighborhood would congregate to play pretend fight games, everyone would pick Bruce Lee, JCVD, Wesley Snipes, Arnold, or Stallone, but I’d always be Kurt Thomas from Gymkata or Michael Dudikoff. Probably because I was the only white kid in my neighborhood and those stars looked more or less the way I thought I’d grow up to look like. I’m grateful to studios like Cannon and Imperial, and even Roger Corman’s New Horizons for bringing so many action stars into the public consciousness. Without those studios, we wouldn’t have Chuck Norris, JCVD, Dudikoff, Don Wilson, Olivier Gruner, and so many others. 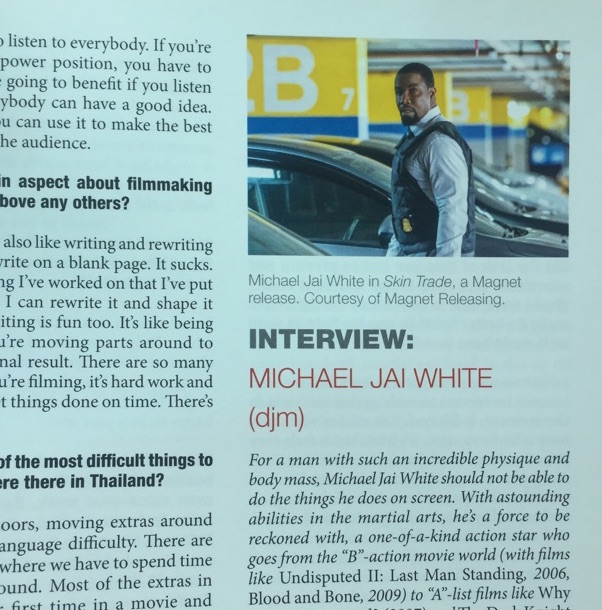 The research to do a book like this must be intense and crazy, but ultimately seems like it would be a ton of fun too. David seems to agree with these sentiments:

The best part of writing this book had to be tracking down and meeting and interviewing so many of the action stars I admired over the years since childhood. I gotta tell you that meeting and interviewing Michael Dudikoff and Mark Dacascos over a two-day period was a career high for me at the time. It’s extremely rare for me to get giddy after an interview, but I felt like I was on cloud 9 after those two interviews. I also really enjoyed discovering a bunch of people like George Rivero, Jino Kang, Julian Lee, Mimi Lesseos, and so many more that it would take a while to list them all. Before writing this book I had only ever seen a few movies with Cynthia Rothrock and Don Wilson, but afterwards, I’d seen every single film they’d ever done. Every. Single. One. Same goes with every other action star I covered.That was fun. Exhausting. But fun.

Some of these guys and gals highlighted in the book are ones we all know. Some are ones that genre geeks like some of us here on the site know, but most folks don’t. Others are Ed Travis level actionphiles only… and, yet, others are almost completely unknown.

There were some guys I knew absolutely nothing about. It was tough finding information on some people who only made one or two movies and then dropped off the face of the earth. I literally scoured the internet and magazine articles and literally cold called people all over the world to get information. I cold called a guy in Australia named Edward Stazak, who had been in two films in the ’80s. He picked up the phone and kindly answered my questions. Kind of a miracle. I did that at least a half a dozen times with various people. Cold calling is never fun, but sometimes it’s the only way to reach someone who might have some information. I was super bummed that when I got a hold of Harold Diamond on the phone, he wouldn’t give me the year of his birth. Diamond, if you’ll recall, was the stick fighter at the beginning of Rambo III. He starred in a couple of his own action films, and I had such a hard time getting any info on him. He picked up the phone and answered some questions for me, but then stonewalled me when I asked him his birthday. 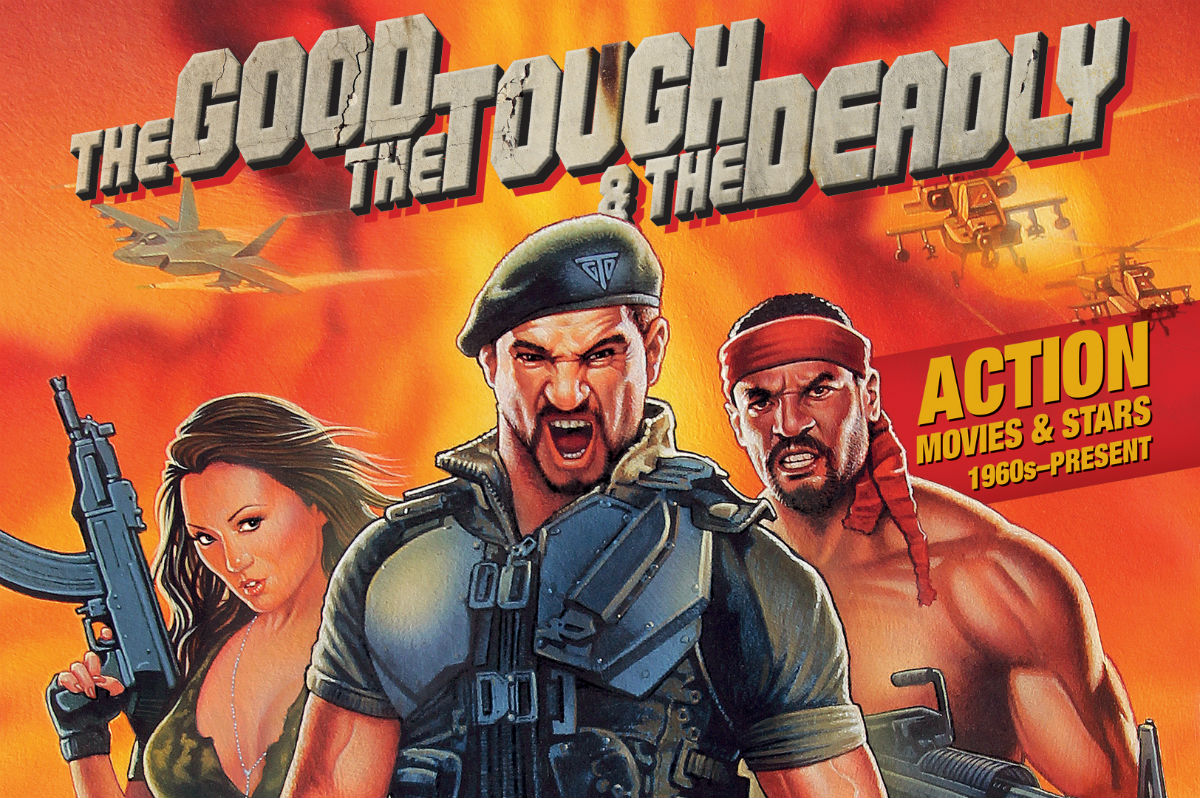 David has a previous genre film reference book that I plan to write more about soon, has completed a “post-apocalyptic coming of age action/fantasy novel”, is working on multiple genre film books, and just completed a screenplay called Blazer that he wrote with a writing partner. Suffice to say, this busy man has a lot more of genre awesomeness coming our way.

But, for now, do yourself a favor and grab this stellar book!