Terrfier is the festival’s second movie of opening night at the festival. It starts at 9:30. Get tickets to the film or a full pass at FilmFreeway!

Tonight’s opening film, Imitation Girl, is a meditative and beautiful science fiction tome. After a brief reprise and ceremony, the night will continue with something just a bit different. That something is the aptly named Terrfier, a brutal stalker/slasher with one of the most terrifying clowns ever put to screen. So, let’s start with that clown… meet Art! 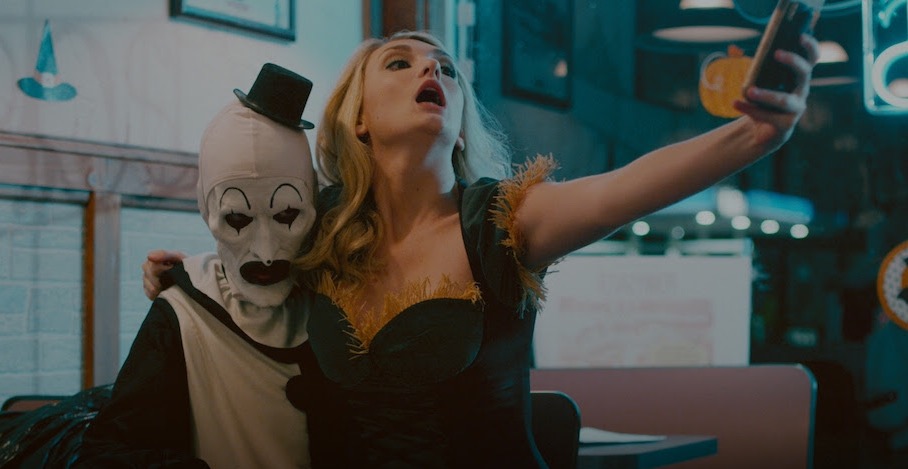 Art made his first appearance in director Damien Leone’s 2013 anthology All Hallows’ Eve. The killer clown graced much of marketing material for the film… and for good reason. He’s a scary looking clown, for sure. But, his appearance is nothing compared to his actions. Dude is FUCKED UP! His sadism knows no bounds. He seems to take true joy in stalking and slaughtering his prey, which he shows through his actions only… as he’s wholly mute, not even making a sound.

Terrifier is extremely effective and, thus, quite horrifying. It’s gory and bloody. And, above all, it’s virtually spoiler proof. The plot can be summarized as “killer clown stalks beautiful girls in empty warehouse” and, yet, without watching the film, you can’t know just how powerful and brutal a film it is. In short, you really have to see Art’s brutality on screen in order to understand just how powerful it is.

My favorite scene includes Art wearing some body parts that aren’t his own while dancing around gleefully. It’s a fun scene in a fun movie, as long as you can have fun while watching a decapitation or two and many other equally sadistic acts of violence. So, tonight, head to Philly and enjoy yourself in that laughing-awkwardly-so-you-don’t-cower-in-fear kind of way. And, if you don’t show up tonight, just know… Art is out there motherfuckers! No one is safe!