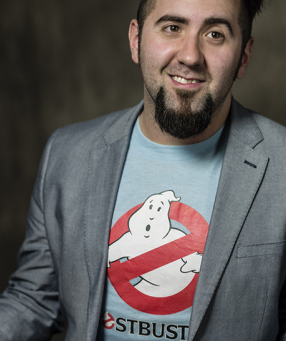 If you’ve never been treated to a Tommy Avallone project, you’re in for a treat. Tommy is an actor, producer, writer, and director. He’s a ball of energy who is extremely talented and creative. Tommy is from South Jersey, not far from the Philly area – where I have made my home for the past 18 years. His most recent project that I had experienced prior to this one was his great documentary I am Santa Claus, a creative and endearing project he did with Mick Foley that was produced by Morgan Spurlock. In a similar fashion, Tommy has once again thrown himself into a fun project that is heartwarming, intelligent, and always a blast.

I spoke to Tommy for my old podcast once for over an hour… and my recorder somehow failed. While disappointed I lost the conversation, I was so impressed at Tommy’s approach to film and his creative process. Interestingly, I agreed to screen and review his latest film without even realizing it was a project of his. I was interested initially because I love Bill Murray and the stories that come out from time to time about his fun exploits. When the credits began to roll and I saw “Tommy Avallone” on the screen, I was extra stoked.

A fun documentary about a fun human being… this is exactly what you get with The Bill Murray Stories: Life Lessons Learned from a Mythical Man by Tommy Avallone. A variety of regular people tell their Bill Murray stories to Tommy and to us. In between these stories, we experience Tommy’s quest to reach out to Bill about the film. Tommy’s earnest desire to make this the best project yet and his realness shine through these moments. And, ultimately, we realize as the film goes on that whether or not Tommy and Bill ever connect, we have already gotten to know so much about Bill Murray, the man, through the joy he has bestowed on the lives of those we spend time with in the film.

This is not a film I can summarize in any effective way, but rather a film you must see to truly understand. The Bill Murray legends you have heard are true… in fact, the real stories may be even more impressive that the versions you’ve heard. And these stories are encapsulated in the best possible way by Tommy Avallone in this extremely enjoyable documentary. This is a must watch for anyone and everyone, so make sure you get out and see it once it hits your hometown.