Accompanying the recent release of A Taste of Phobia, Philadelphia’s Artsploitation Films released the much talked about German anthology of fucked-up-ness German Angst. This visceral, bloody, and heavy collection features three films that are extremely dark and painful. With intense violence, pain, and perverse sexual taboos, the film delivers on its promise of angst and its reputation of extremity.

The film opens up with my favorite Jörg Buttgereit entry to date. This claim is more a product of my distaste for Buttgereit than the strength of the short. However, I didn’t hate it… which is more than I can say about anything else of his I’ve experienced. It’s easily as grotesque and gory as his other films, but there’s something about it that feels like it may be laying stake in some shred of social commentary or message beyond his other films (worth noting that my experience with Buttgereit is limited to the Nekromantik films and Der Todesking).

With this in mind, this short, translated to English as Final Girl, focuses on the torture of a man by his daughter. One cannot help but infer that her actions are inspired by the sexual abuses of the man towards his daughter. The short is brutal and visceral, with focus on castration. We find at the end that what we believed to be happening may not be exactly what is going on, but we also gain some more definitive insight into what may have lead to these actions. There are clever reveals throughout this short that explain much of what is going on. It’s, by far, the most impressive Buttgereit I’ve seen to date and has brought me back aboard the quest to check out more of his work. 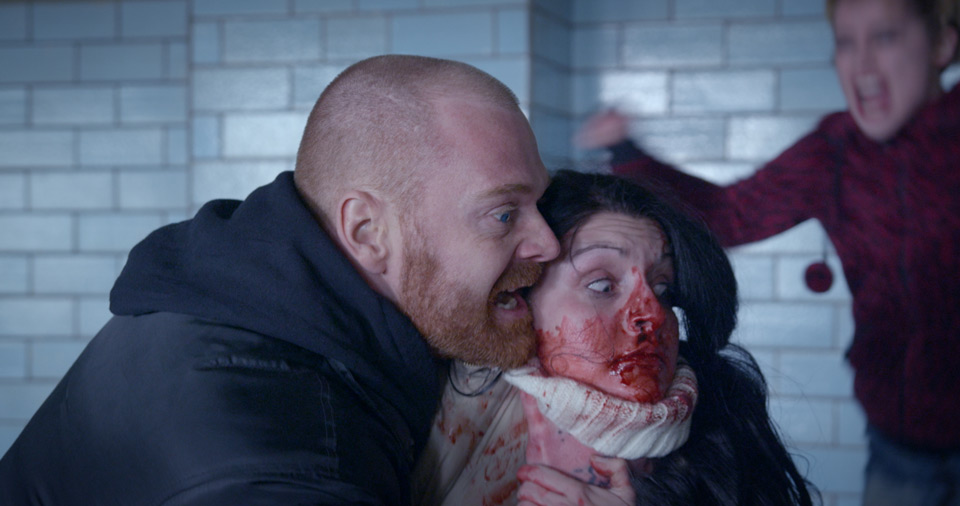 Director Michal Kosakowski doesn’t necessarily have a ton of filmmaking experience, but his writing and direction on this project is pretty impressive as only a second narrative project. The story begins as a pretty straight forward tale of torture, before it takes an extremely bizarre turn. The concept is extremely intriguing and the execution is pretty solid. Ultimately, it misses being truly fantastic only by a bit.

Like the previous segment, it interests me in the future work of the director. Here’s hoping for Kosakowski’s return to the pen and the camera in short time. His blending of realistic anguish and supernatural ideas feels like it could lead to something truly brilliant with some more support and a better budget.

This one is written and directed by another filmmaker relatively unfamiliar to me, Andreas Marschall – who is most known for his fantasy/horror anthology Tears of Kali. Just as the previous segment introduced some fantastical elements, this one continues to utilize such devices. Here, however, the fantasy is based in sexual desire. There is an exploration of perverse and taboo desire in this short.

Truth be told, the short is simultaneously the hardest to get out of my head and the least likely for me to rewatch. While sexually charged stories can be alluring, this one is not one I desire to spend much more time on at this moment. This is mostly because it was the most visceral and repulsive. Of course, I suspect the director was aiming for the very reaction I experienced – a painful story that isn’t easy to digest. While I can’t figure out if this one is thematically rich or devoid of any important themes at all, I do know that I won’t soon forget it.

Overall, I find myself appreciating things about this one, but ultimately wanting more. This may mean that the film doesn’t quite hit the mark for me – which I think is true, in some ways. However, it may also mean that it whet my appetite for more from these artists. My queue has grown to include a revisit to Buttgereit with Schramm, one of the big names films of his I’ve yet to see, as well as a couple from Marschall (likely Masks and Tears of Kali). In that sense, this film drew me into the work of these bizarre storytellers.

Germans are know for being a people full of angst and this collection certainly bolsters that assertion.