When it dropped in theaters and on VOD last month, we pulled out the ole Friday Fight column to hash it out about this latest installment in the Puppet Master films. It turned out to not be so much of a fight, as myself, Blaine, and Richard all seemed to enjoy the film a good bit.

Blaine, a lover of the original series, added:

I can’t say that it is perfect, but I can say that it is pretty damn fun. This idea of completely throwing away the original story can be jolting at first, but it makes up for it with great kills and hilarious banter. I spent most of the film laughing and I eventually stopped comparing it to my beloved, but shitty original films.

While both Blaine and Richard extolled the things they appreciated about the film, I focused more on the controversy the film cause before folks even saw the film. What is frustrating is that we live in a world where a film can’t have evil Nazi characters without being accused of being sympathetic towards Nazis. What’s more is that the accusations mostly came before the film had been screened – much less played theatrically. The Twitter talking head twits all rushed to condemn the film and film writer S. Craig Zahler without seeing anything beyond a trailer, if even that. The final product may be a tad problematic in moments, but it’s certainly not sympathetic towards the evil little Nazi bastards that comprise the so-called “Littlest Reich”. We even get a heroic Jewish character fighting back and a good deal of dialogue reminding us, in this bizarre age where a sympathizer of White Supremacists is in the White House, that Nazis are indeed BAD.

I think this is a fun horror film with humorous moments and solid performances. It’s really not much more, nor much less. 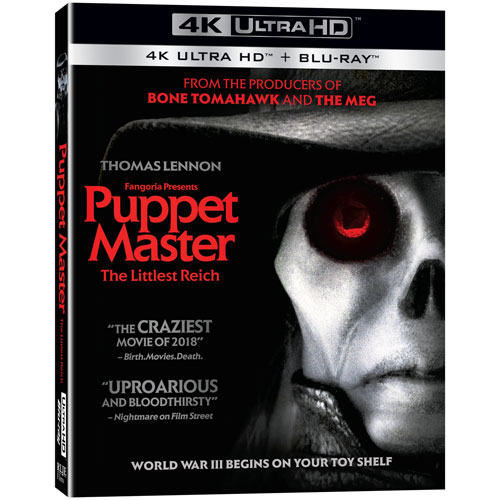 Released by RJL Entertainment, the film is available in multiple formats; but, the best one to grab is the 4K package if you have a 4K TV and UHD player. It looks great, includes a copy of the standard Blu, and has some great special features:

It is also available in a Blu/DVD combo package and a standard DVD. All of the options have great price points, with the steepest copies available under $20 at nearly every major retailer.

With this first jump back into film production, Fangoria did a great job. Teaming with RLJ was a great choice, as well. Personally, I’m excited to see more from this franchise and more from Fangoria moving forward. For now, I’ll enjoy this fun little Nazi puppet gorefest and you are welcome to join me… just don’t call them dolls!