If you are a child who feels awkward, different or just someone who doesn’t fit it, an imaginary friend can end up providing the acceptance and reassurance you need in everyday life. While I can’t speak to this issue with such conviction since I myself never had an imaginary friend, at times I wish I had one. I was a victim of bullying during my middle school days, which for some reason rested on mocking my teeth being green, despite them being quite the contrary. While I did have friends I hung out with and they accepted me for who I was (at least they seemed like they did), the aid of having someone who would always listen, always be there for you at any hour and just be a constant source of comfort, would have been wonderful. An imaginary friend has that ability to ease the pain. In time, as you grow out of childhood and into being a young adult, those creations of the mind tend to wane and become a distant memory. What if, however, you felt the need to bring back your imaginary friend during another time of depression, despair or general unease in your life? And, just what if, that imaginary friend has also grown up and not quite the same as you fondly remembered? This is the basic template of the psychological horror/thriller Daniel Isn’t Real, from director Adam Egypt Mortimer (Some Kind of Hate), for which I was able to screen at the Brooklyn Horror Film Festival on October 18th.

Luke (Miles Robbins) is a child who is dealing with a fractured family when he one day goes out for a stroll. As he ends up encountering yet another traumatic experience while walking, Luke is suddenly introduced to someone named Daniel. Daniel, as it turns out, is not real and has become Luke’s imaginary friend. After Daniel goes too far with a prank, Luke is forced to lock his friend away in a dollhouse forever. Fast forward some years later, we now meet college-aged Luke, who has developed a very solitary life full of awkward interactions and daily check-ups of his now crazed mother. Luke ends up, at the suggestion of his therapist, to re-introduce someone back into his life that has been gone for quite a long time to help him cope with his current conditions. That person is his imaginary best friend from his childhood, Daniel (Patrick Schwarzenegger). Daniel has certainly changed over the years he has been gone, appearing cocky and full of the self-confidence that Luke desperately needs. Daniel ends up agreeing to help Luke navigate life and become a more desirable and self-sufficient man, but Daniel’s intentions are not what they seem, and in time, the true nature of his emergence will rise. 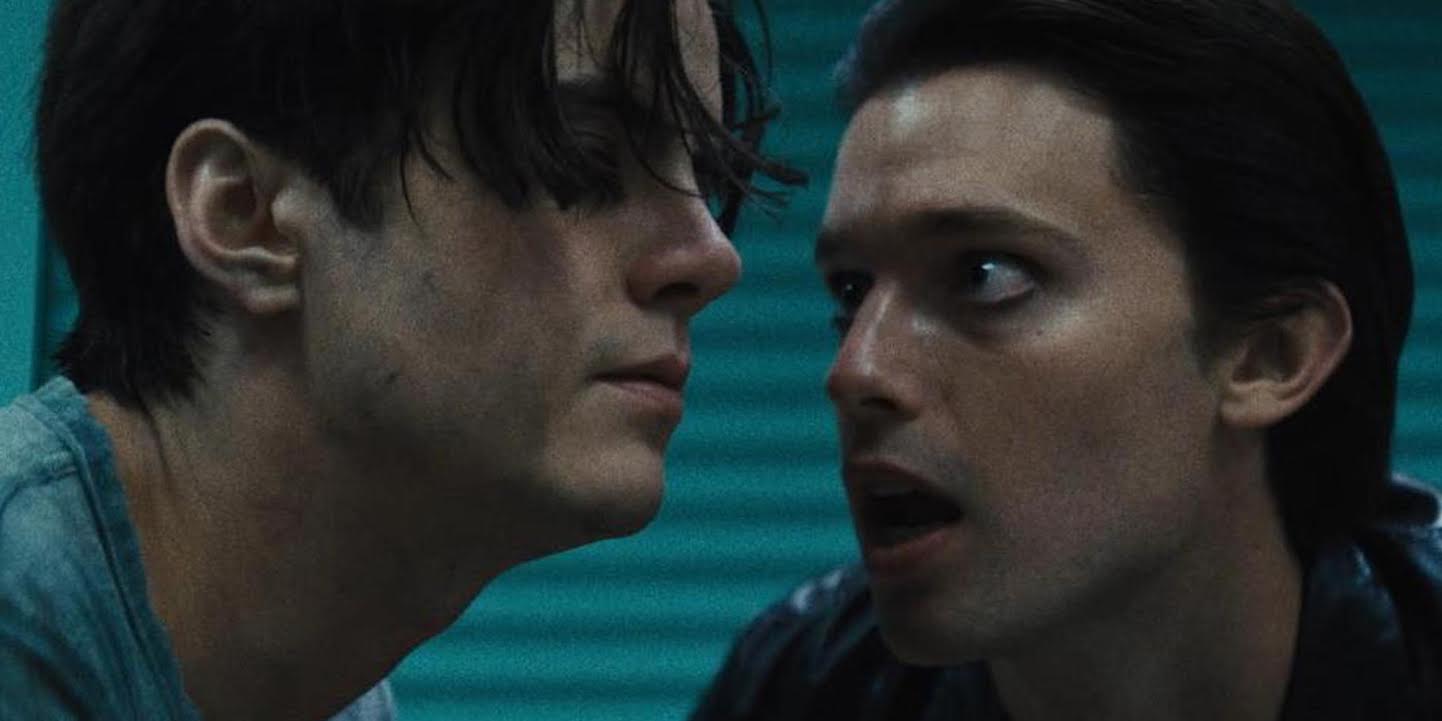 We immediately know right off the bat that this movie is not fucking around. After a quick trippy visual opening, we cut to a regular morning at the local coffee shop, but then things quickly take a very scary and real turn, setting the tone for the rest of this simply marvelous movie. Yes, Daniel Isn’t Real deserves all the praise and accolades that are pouring out of festivals across the country. Director Adam Egypt Mortimer has lovingly crafted a spiritual successor to the granddaddy of psychological head trip movie, 1990’s Jacob’s Ladder, right down to even filming the entire movie on location in New York. Mortimer also paces the movie incredibly well, with no scene overstaying its welcome and confidently movies from one sequence to another over the 96 minute running time. Sometimes these heavy psychological movies can truly feel like every minute of their run time, but Daniel Isn’t Real is a brisk watch. It’s apparent throughout the film that everyone involved knows exactly what needs to be done to deliver a quality product and they successfully do just that. Daniel Isn’t Real is chock full of visually sumptuous shots that are wonderfully composed and colored, such as various lighting techniques enabled in different locations like in an underground tunnel and multiple peeks and looks at what the film calls “the abyss” and its surrounding structures. All this goes a long way in making the viewer feel like they are trapped in a mindfuck of a trip while still having a level of grounding to the entire story. The score and musical choices are also well implemented and downright haunting, evoking a sense of doubt and insanity that the movie devolves into as it progresses. The film also contains some truly mind altering practical effects, with a hard lean into Cronenberg levels of body horror, with multiple sequences strewn across its run time. One specific sequence where Luke and Daniel seemingly begin to meld into each other’s face, with skin tendrils and eerie sounds added in for good effect, is a standout of great visual representation and camera effects. There are a few other great practical effects, particularly later in the movie, but I will not spoil them here, as you should experience them first hand.

While we are on the topic, Miles Robbins (son of Tim Robbins and Susan Sarandon) delivers a great performance as the troubled Luke, pulling us into his problems and situations and successfully having the viewer feel utter sympathy for him at every horrid turn that befalls his journey. I never once felt any disconnect from his performance. Sasha Lane also turns in a great performance as Cassie, a local artist that Luke takes a liking to and they begin to develop a deep connection and relationship. However, Patrick Schwarzenegger (who is, obviously, the son of Arnold Schwarzenegger) steals the movie in every scene he is in as our imaginary friend Daniel. Schwarzenegger exudes confidence, commands the screen over each of his co-stars and delivers a maniacal performance, clearly having a blast playing someone who doesn’t have to conform to the rules of life and is pretty much free to do what he will at his leisure. There is also a crazy sword fight on top of a building during this movie, which I only bring up because it was quite awesome and just really solidified the craziness of this psycho gem.

I tried to skirt on the various plot twists and story beats of this movie, as it is really a film that one should witness on their own accord without much detail outside of the tidbits I’ve already provided. Daniel Isn’t Real is a great psychological horror film with strong ties to Jacob’s Ladder, Cronenberg body horror and displays a strong sense of what it wants and needs to be. No minute of movie feels wasted or extraneous and it all moves from one scene to the other with an assured hand and clear objective, and I am generally a sucker for a movie that takes place in New York and actually FILMS in New York. Daniel Isn’t Real is a film that definitely warrants its praise and is well worth a viewing. As I said before, I never had an imaginary friend when I was growing up, and in some instances I wish I did, but after watching this movie, maybe in the end, that wouldn’t have exactly been a great idea. Life is hard enough already.