Haunted house movies are a genre of horror that have delivered some of the greatest films ever made, and that is not an overreaction. We have amazing examples of the quintessential haunted house stories, such as 1982’s Poltergeist (Directed by Tobe Hooper) and 1963’s The Haunting (Directed by Robert Wise), both of which are expertly crafted horror shows that end up delivering the goods in two completely different styles, with Poltergeist showing us all of the ghostly apparitions in all of their mystical and scary glory, while The Haunting takes a much more modest approach, utilizing only sounds and camera angles/tricks to evoke a sense of dread and terror while showing basically nothing of what is causing this house to be so haunted. We even have recent examples of the haunted house genre done right, such as James Wan’s epic scare-a-minute rollercoaster ride The Conjuring, delivering genuine terror and scares that harken back to the yesteryear of horror movies, where showing less was more. However, we do get artificial and derivative haunted house movies from time to time that simply aren’t aware of how to effectively deliver this kind of product, despite such glowing examples to use as reference. One such failure is the 1999 remake of The Haunting (from director Jan De Bont), an expensive studio horror picture that makes the mistake in thinking that a plethora of digital effects, showing everything and anything about the ghosts you would ever even want to know, is how you scare an audience. In this case, all it did was make me laugh and generate zero tension. On Wednesday the 23rd of October, on the seventh day of the Brooklyn Horror Film Festival, I found myself in a theater watching yet another haunted house movie, The Girl on the Third Floor, from Travis Stevens in his directorial debut (he produced Starry Eyes and Cheap Thrills for reference, among numerous other great indie gems). Can Stevens deliver another quality gem in the haunted house genre, or will it end falling on the side of a misfire?

Meet Don Koch (Philip “CM Punk” Brooks), a married father-to-be who has decided to purchase a fixer-upper in the suburbs of Chicago. Don is trying to leave his old life behind, one of seemingly deceit and immoral behavior, and start anew with his pregnant wife helping him at his side. As Don begins to fix up the house, with the company of his dog Cooper, strange occurrences begin to materialize, unusual viscous liquids start to swell up and ooze out of every wall and hole in the domicile, and the presence of an alluring woman all conspire to cause havoc and disarray for Don. Can Don successfully navigate the endless nightmares that are being beset on him from all directions and leave his past behind to forge a new future, or will the same mistakes he has made in the past conspire with the evil of his new house and ultimately become his undoing? 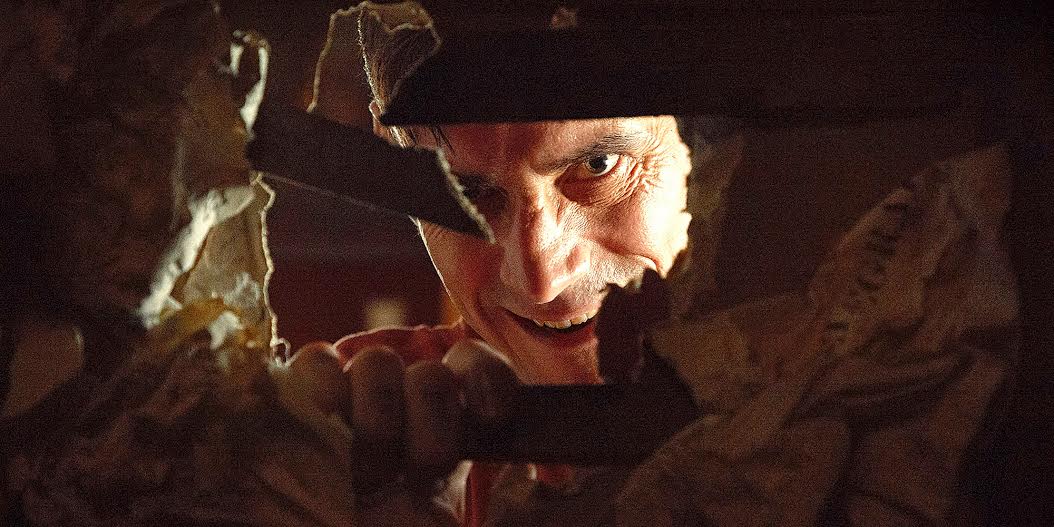 Director Travis Stevens has crafted a great contained ghost story with plenty of good eerie moments and a solidly constructed plot. The opening credits set the tone immediately for what kind of haunted house tale this is going to be. Static shots, cutting from one random location in the house to another, all accompanied by subtle musical hums with varying degrees in strength, all contribute to evoking a sense of unease of what exactly is wrong with this house. One of the more interesting aspects of this movie is that it has the feeling of being two separate films, with each exploring a different character and diving into their personalities and how they end up reacting to the situations that arise within the confines of the house. The first film consists of around 75 of the 90+ minute run time of the movie, and has us getting to know Don Koch, played with a blue-collar swagger by Phil Brooks (CM Punk to the WWE aficionado). The portion of the movie is a very deliberate and steadily paced exercise in building tension with a slight sound, visual cue in the background or a weird gooey substance emanating from a cracked wall. The camerawork is also very basic and simply framed, involving next to no movement after the camera is placed in the location it will shoot, with only an occasional pan from left to right or up to down. This makes the viewer feel like we’re watching someone through a lens and witnessing them trying to clean up a house for his new family, all while strange occurrences continue to derail his plans at every turn. Speaking of, Phil Brooks turns in a great workman-like performance as the struggling Don, who is trying to run from his sordid and downright vile past mistakes to have a clean slate and fresh start with his wife Liz (Trieste Kelly Dunn), who we only get to know through facetime conversations on his phone. Brooks brings a rugged and slightly bemused look to Don, having him appear to be always looking like he is in way over his head and completely swarmed by the litany of objectives to accomplish in fixing his house. Some people may call his acting wooden and stiff in certain scenes, and while I can see that in some regards, it all lends a level of realism and elicited genuine investment in the character. Between Phil’s performance in this movie and Roddy Piper’s glorious accomplishment as Nada in Carpenter’s They Live, I really don’t want to hear ANYONE claim that wrestlers can’t act, because it’s selling short some memorable performances.

I also appreciated the very restricted use of a musical score. Outside of the heavy metal that plays on Don’s headphones and an occasional ambient music and banging that periodically pops up, our audio intake is relegated to dialogue between Don and various people he comes across (a noisy neighbor, the local pub owner, the sexy stranger Sarah, his friend Milo who comes to help fix the house), creeks and sounds of the house and, of course, the barks of his dog Cooper. The sexy stranger Sarah, played with mischeivous glee by Sarah Brooks, does ends up being a very integral character to the story and she is clearly relishing the wavering she is displaying between innocence and malevolence. I also loved the limited use of jump scares, as Stevens avoids the trope of overloading his film with cheap tactics in place of genuine terror. That doesn’t mean we don’t get any good stingers or great scares, just the opposite. Stevens doesn’t overload with one jump scare after another, but he does provide his fair share, consisting of one sequence involving a corded camera being snaked through a wall and the effective use of marbles and them rolling and traveling throughout the house, eliciting dread every time they pop up.

At around the 75-minute mark, after a horrible circumstance befalls our central character Don, which involves marbles and a retracting blade (which I will not elaborate on any further, but just to say that the practical FX in this sequence are squeamish and amazing), we are surprisingly introduced, in the flesh not just a face on a phone, to Liz. As she arrives the house, the entire movie’s framework and style changes. The camera begins to move more fluidly throughout the house, ditching the static shooting style for a more aggressive and personal viewpoint. This is primarily done to facilitate tons of exposition on what exactly is the story and mystery behind this haunted house and why it acts out in the way it does. It is also done, however, to reflect who Liz is as a character and how she reacts to what is transpiring. Don’s past and imperfections led to the house having a stranglehold over him, while Liz proves to be a much stronger character in terms of her moral code and psyche, and the more active camerawork shows she is someone who acts to preserve herself, not a person who allows the past transgressions to affect their future actions. Trieste Kelly Dunn is very effective and believable in her performance at the end. She fully succeeds in making us truly care for a character we only knew for most of this movie as a face on a digital screen, which is quite an amazing feat considering her limited physical on-screen time. A music score also is implemented to ratchet up the tension on Liz’s nightmarish night in the house, learning of all the dark secrets within its walls. This part of the movie is where we are also treated to some bonkers practical FX, ranging from faces jammed into walls, eyes blinking in a sink drain, and a particularly gruesome makeup of someone with multiple lacerations and deep festering wounds. Special mention must be given to the character that IMDb refers to as “The Nymph”. She is a great example of gorgeous makeup, prosthetic applications and ingenious visual design, with the teeth laceration running up the right side of her face a true stand out. 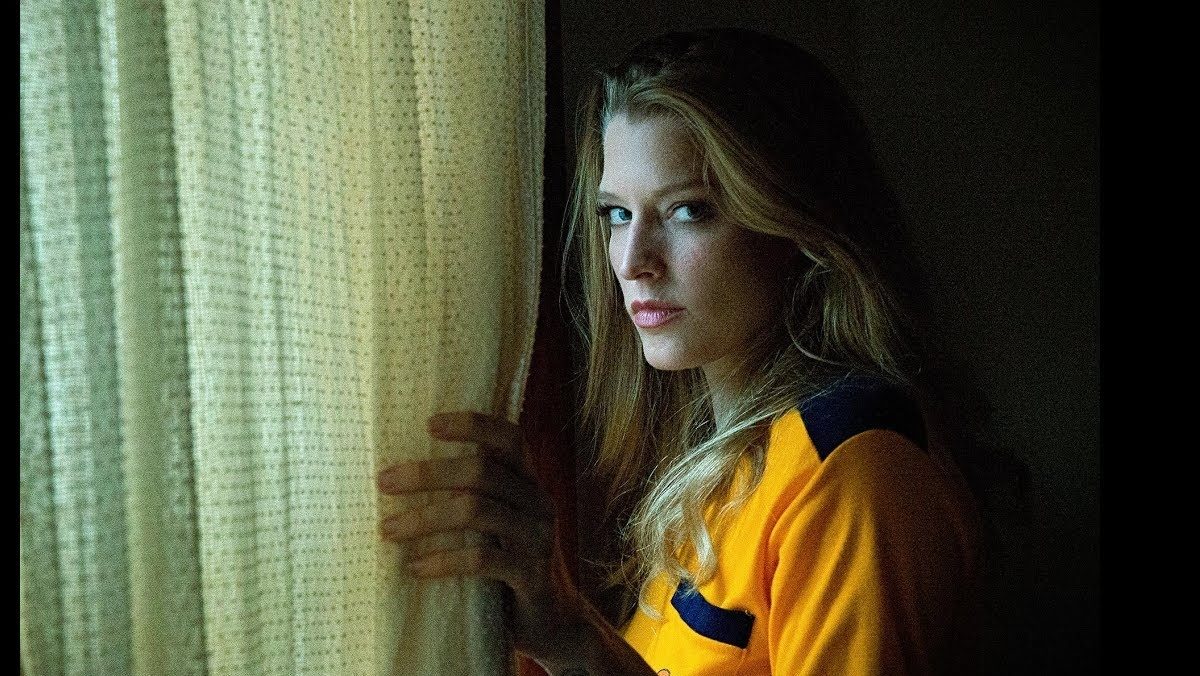 I wasn’t quite sure how I was going to react to Girl on the Third Floor. I had heard middling reviews out of the various festivals it has been playing at in recent months, and I was curious how Phil Brooks aka CM Punk would handle the task of being the main star of his first motion picture. All my minor fears were cast aside once the film commenced and I ended up coming away quite impressed from Travis Stevens inaugural directing debut. He clearly was a big influence on the countless horror films he produced in the past years and brought that knowledge and assuredness to his initial directing gig. The movie has a style, atmosphere and tension that is palpable, the scares are scattered nicely and are put into use at the exact right moment, and the story is an interesting yarn that draws you in (creepy side note – the house they shot the movie in is actually haunted, and the story behind its haunting is the story that is utilized in the movie – just adding more fuel to the creepy fire). Everyone involved should be proud of what they churned out. Travis, don’t wait too long to direct again. Keep on going man.