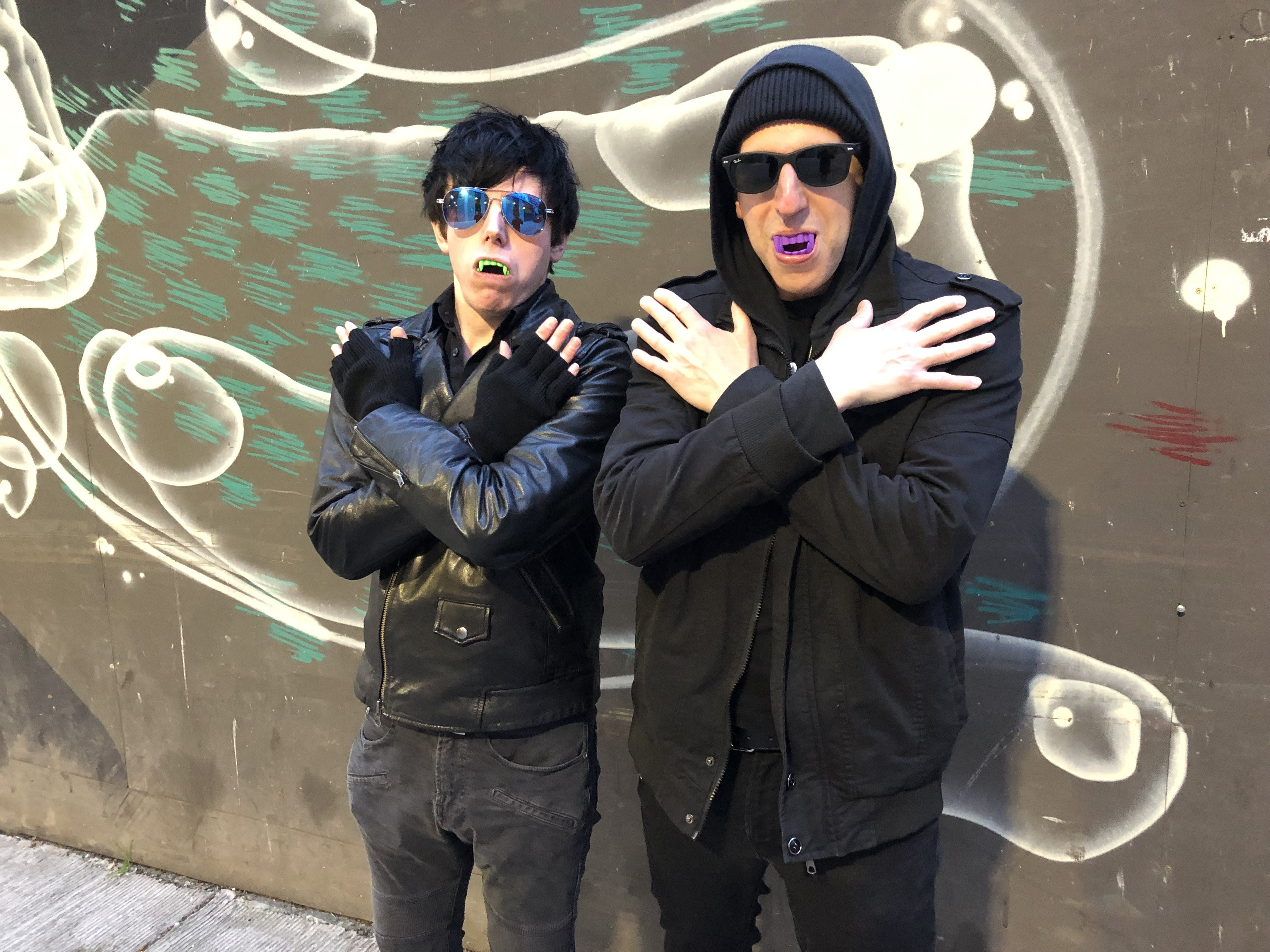 I had the chance to chat with filmmaker and musician, Byron Miller. Rather than give you my own introduction, I’ll jump right in and let him do a better job of it, himself…

Hey Byron! Tell us about your band, Dracula Party!

It all started when I became friends with Chris Longo, musician behind the awesome synth band Idoless, and formerly of the rad goth band, Uncommitted. We met up through mutual friends and bonded over our love for horror films. Our first collaboration was on a reinvention of “The Last Halloween” a track from my previous band, Ghosts in the Graveyard. He made a wicked version of it and we got along great in the studio. As GITG was put on the backburner I pitched a new music project to Chris; we team up and create a synth driven industrial band with fun horror lyrics. Chris dug the idea and Dracula Party was born! In July 2019 we released our debut EP, “The Devil Wears a Mask” quickly followed by the Giallo themed music video for our song “Trick or Treat”. We’ve been playing shows and having a blast with it. We’re headlining a show on Halloween night at Seattle’s oldest bar, The Central Saloon!

You directed the latest music video. Besides being a musician, you also are a filmmaker, right? What drew you to film, specifically horror and genre film?

Yes, I’m an indie filmmaker working primarily in the horror genre. I’ve directed 2 feature films so far (NIGHT – 2006, The Anatomy of Monsters – 2016), along with a number of shorts, music videos, etc. I’ve been a horror fanatic since I was very young, like preschool age. Being an 80s kid growing up at the birth of the video store and HBO and MTV…and having cool parents that let me watch everything I had a lot of access to horror films and a lot of inspiration from music videos. My paternal grandmother also fostered this love of the macabre, telling me family ghost stories from a young age. I loved the local horror host, Sammy Terry, and would make my dad do impressions of him, dressed up like him for Halloween. I was the kid that built haunted houses in my room (and later worked at various haunts), made movies with my dad’s camcorder, saw as many horror films in the theater and Drive In as I possibly could. I was 11 or so when I decided I had to be a filmmaker. I started writing scripts (the first was Heavy Metal Zombies!). I took typing courses in high school to type scripts faster, TV Communications class to learn editing and basic shooting principles, and Film courses in college. Musically, I was briefly in some bands in high school. In the early 00s I had the good fortune of getting brought into the industrial band, God Module. I was a part of that band for 8 awesome years, mostly as the co-frontman putting on crazy shows all over the world. It was a blast! A few years back I teamed up with my wife, Shelly, and my film collaborator, Paul Morgan, and started the shockrock band, Ghosts in the Graveyard. We have an album, Monsters for the Masses, and a remix album The Last Halloween. We had to put GITG on indefinite hiatus and it felt like a great time to do a new synth project which lead to Dracula Party. Horror, Film, and spooky music is my life!

Who are some your biggest influences are a filmmaker?

So many! Here are some of the biggest ones and their key film that inspires me. Richard Stanley (Dust Devil), Sam Raimi (Evil Dead 2), David Lynch (Lost Highway), John Carpenter (The Thing), George Romero (Dawn of the Dead), Lucio Fulci (Gates of Hell), Noah Bambauch (Kicking and Screaming), David Fincher (Fight Club).

If you’re anything like me, you watch a TON of horror and spooky movies in October. What are some of your favorite films to watch in October?

Yes! I watch horror all year round, but the stuff I generally put on every October include… Trick r’ Treat, Carpenter’s Halloween and at least a couple of the sequels, The Midnight Hour, Pumpkinhead, Dark Night of the Scarecrow, Ernest Scared Stupid, Trick or Treat, Hauntedween, The Barn, Satan’s Little Helper, Tales of Halloween.

Back to the music, so I’m gonna repeat a previous question and ask about your influences, but this time as a musician.

Being into horror and a weirdo, it was natural that when I really got into music I embraced the darker stuff. These are some of the bands that have influenced Chris and me for this project. Nine Inch Nails, Alice Cooper, Front 242, Frontline Assembly, My life with the Thrill Kill Kult, Nitzer Ebb, Misfits, early Ministry, Hocico, Aesthetic Perfection, Ritual Howls, Kanga.

One of the things I started this website and my current podcast for was to explore the relationship of art and faith. I, personally, am a pastor’s kid who is most a non-church goer but still has a personal faith. I find that my tastes in art and my exploration of art is often link inextricably to the way I approach God and spirituality. Do you see any connections to how you were raised or your personal beliefs and the art you’re drawn to?

That’s interesting! For how I was raised; my parents are Christian, and we were occasional church goers. I was a believer as a kid but slowly fell out of it. Now I’m agnostic with some spirituality. I would like to believe that all life is cosmically connected. We’re all a part of everything; stardust. Or maybe not. But that’s what I’d like to believe. While my dad was always the most religious of the family, he still pondered things with me like aliens, ghosts, any “what if”. All of that said, my dad’s biggest influence on me was his great love of all movies. We went to the movies every weekend! Also, his family’s history with the supernatural. On the other side, my mom always supported my love of movies and horror and my maternal grandma let me have many a horror movie night at her house with my friends. It’s all connected, my open mindedness to all possibilities, my endless fascination with the supernatural, boundless love of movies, and adoration of all artists that explore darker territory.

How about the art you create? Personally, again, I find horror to be an area I’m extremely drawn to because of my faith. As a genre, it explores the deeper questions and realms that so much other art refuses to wrestle with, but it’s in those dark places that I think faith is challenged and can grow.

The horror that scares me is supernatural. I only fear the unknown. I do see the correlation between this and my lack of a concrete spiritual belief system. I may not necessarily believe in the devil, but demonic horror is scary as shit because if you ran into a “demon” it’s going to be something beyond our understanding. Something malicious that we have no clue how to fight. I find films like The Exorcist, The Conjuring to be scary as shit.

The other side of the coin is, horror is a wonderful escape and a great way to safely explore real world issues. I love horror that reflects social issues (Romero’s Dead films, They Live, People Under the Stairs, American Psycho, Get Out, Ginger Snaps) or dark sides of the human condition (The Shinning, Silence of the Lambs, The Texas Chainsaw Massacre) or can be like going through a haunted funhouse (Evil Dead 2, Dream Warriors, Jason Lives, Fright Night, Chopping Mall). 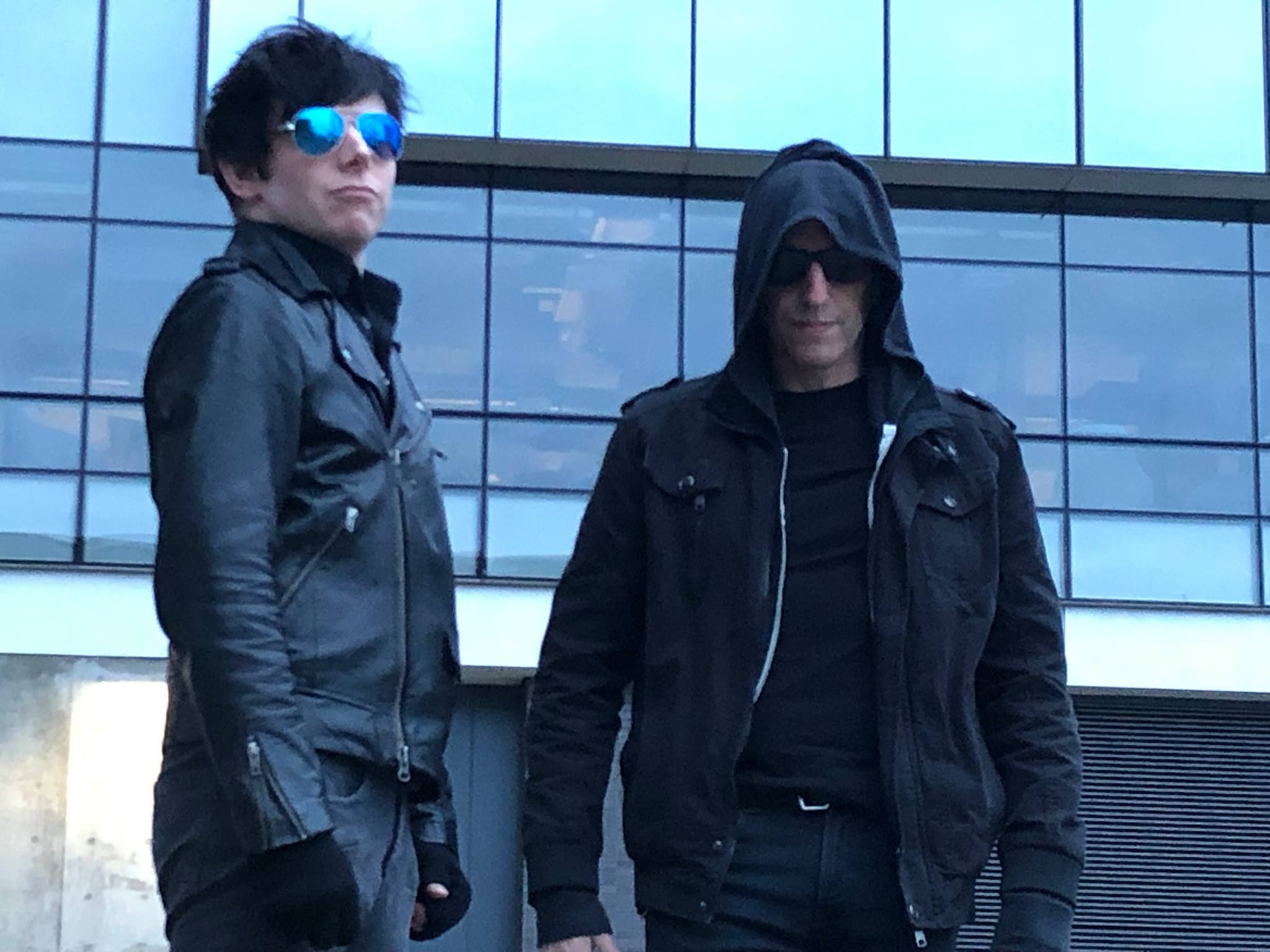 Thanks for indulging me there, before we wrap up, let’s look a bit more at Dracula Party and your other projects. What are you currently working on?

Thank you! We just recorded a new track that’s set to drop on Bandcamp on Halloween. Soon we will begin working on a full-length album for release next year. On the movie side, I’m working with my wife on a rewrite of one of my dream projects, FRIGHT. It’s about an 80s Horror movie host turned legendary killer. This is a script I’ve kicked around for years but recently my wife and I talked about some ideas I had for a new approach. She had amazing thoughts on how to make that happen. It’s been great! Also, recently I was the screenwriter, editor for the award-winning short film, (in here) I Am God. I’m working with that team (Joseph Seuferling and Nima Forghani) on a wild, horror art film. I can’t say much other than it’s a dark exploration of magic and science.

Where can folks check out your films, music, and projects? How can folks follow you to see what’s coming up in the future?

You can go to www.byroncmiller.com to find links to all of my films, shorts, etc. I’m also on Twitter and Facebook as Byron C. Miller.

If you like it, please spread the word. I really appreciate it. We’re not on a label, just doing this for the love of it. All support is extraordinarily helpful.

Thanks again. Any advice for the boils and ghouls reading this?

Life doesn’t always go like you imagine. I’m not making movies and music as my career. However I do have a great creative job (Content Producer at the ad agency Wongdoody) and still find time to do film and music. If you have the need to create this is the best time in all of history to have access to the learning and the tools to make movies and music. Utilize the endless online tutorials for film and music creation (and go to film school if you can). Watch lots of movies, read lots of scripts, listen to all kinds of music. Research how to make it and start making it. Also, don’t worry if it’s crap at first, that’s normal. Keep going. If you have the drive and determination to learn, be disciplined, and keep moving, you will grow. The worst thing you can do is be lazy about it. Because everyone can access a camera and editing software the world is flooded with content. It makes us want to go out with a camera and start making, but some fall into the trap of just picking up a camera without any research, shooting flat scenes with bad audio, crudely cut together. Sometimes this inexperienced filmmaking can be charming or even amazing (Miami Connection) but often it looks like blurry footage of some people standing awkwardly in an apartment delivering bad dialogue. Also, I’m well aware that my first film, even with all that I learned, has a million flaws. My second one is a million times better but it’s nowhere near perfect either. This is all a process. Learn. Create. Grow. Rinse Repeat. Also, have fun when you can. Creating art will always have it’s frustrations but it can often be a wonderful good time!