This trailer opens with the line “you either get it of you don’t” and truer words couldn’t be spoken about many a cult film, of course this includes the subject of this documentary, the box office bomb turned cult favorite Showgirls. Starring Elizabeth “Jesse Spano” fresh off of her lengthy turn in Saved by the Bell. While many were shocked at the high school senior at Bayside hopping right into performing at a fully nude strip club in Vegas, the over-the-top moments of Jesse Spano certainly have more in common with the excessively emotional showgirl Nomi Malone than people were likely to be comfortable with at the time. Berkley’s Saved by the Bell character – like Berkley herself – was a dancer and the melodramatic acting style employed by the teen actors in the legendary high school sitcom with a message certainly set her up for this role.

Look no further than Jesse on speed to see shades of the emotional Nomi freakouts found throughout Showgirls.

The new documentary, You Don’t Nomi, explores everything about Nomi/Berkley, director Paul Verhoeven (Robocop, Starship Troopers, Total Recall), writer Joe Eszterhas (Flashdance, Jagged Edge, Basic Instinct). and everything about the film and its legacy. Adam Nayman, writer of It Doesn’t Suck: Showgirls, explains that Showgirls was first consider a “piece of shit” by most of the world, then it became a “masterpiece” in the minds of a select cult group, but it’s actually both… it’s a “masterpiece of shit”. This feels like the central thesis of this documentary in many ways. Showgirls is over-the-top and sloppy. Yet, it aims for lofty and interesting ideas that somehow simultaneously work and fall flat on their faces. It’s amazing and wonderful, but also utter shit in so many ways. While I love the film so much, this documentary is so on point with all of its positive and negative takes. It’s clearly not beyond reproach and this documentary really highlights the vast array of thoughts and views on the film.

The documentary is not only insightful and interesting, but extremely entertaining as well. Like Showgirls itself, it’s hard not to find every moment fascinating and nearly impossible to look away. One of my favorite documentaries about a single film and the story around it, You Don’t Nomi is a must own addition for any fan of Verhoeven, Showgirls, or cult film. Pair it with Nayman’s book for the full experience. 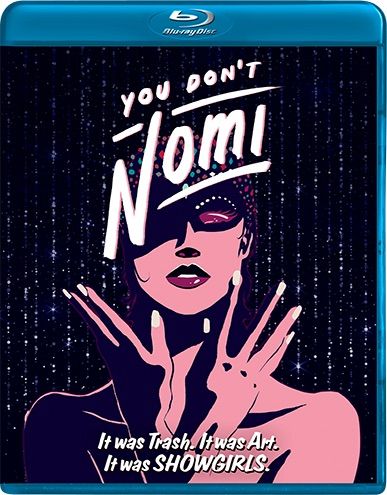 On July 21st, the documentary will be available on Blu and DVD. It was released a few weeks ago on VOD and digital outlets.

While the home video release is a no frills package, it features that fantastic cover art and is priced well. It looks fantastic on your shelf next to your copy of Showgirls, too. That I can safely attest to.

Check out more of my thoughts, as well as the thoughts of my co-host Blaine and our guest GREG TRAVIS on our episode of Grindhouse Messiah about Showgirls and another one of Travis’s films, Night Creep below: