Gaming’s Scariest Moments is back after taking most of 2021 off. More exhilarating than ever, join Eric as he works his way through more frightening fun! 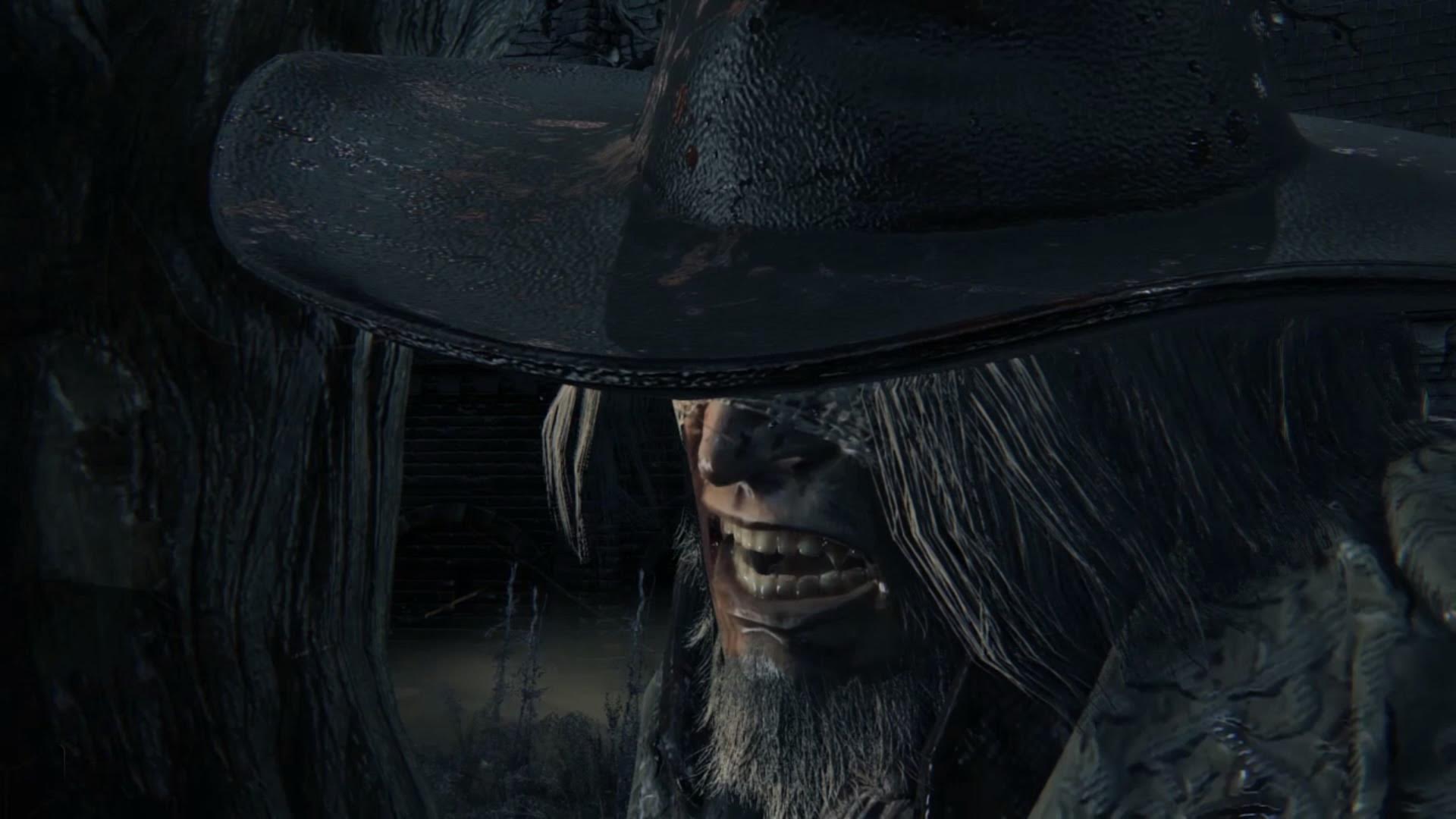 In gaming, a “scary” moment or an insane boss fight that you feel like you can’t beat can be something that causes the player to feel tension, to sweat, or to feel unease.  No other developer working in the business today knows how to make each encounter feel like a fight for your very soul, to make the player earn every step of their progression, quite like From Software. The creators behind the Dark Souls franchise and the upcoming Elden Ring, those madmen over at From Software have fine-tuned the challenging gaming experience of their classic “Souls” formula over the years and are respected around the industry as the true last bastion of excellent AAA independent developers. Looking at their catalogue, one of the projects sticks out from the rest as From’s attempt at making a gothic horror game. The title I speak of is Bloodborne, published by Sony for the PS4 back in 2015. This title is a marvel of exquisite art and game direction. The heavy Victorian horror vibes of the main city location, Yharnam, are felt throughout its DNA, from the playable character you devise, the various troublesome enemies you come across on your adventure, and within the numerous heavy boss encounters you find yourself trying to navigate through this 30+ hour game. While I have recently become more adept at COMPLETING intensely hard games – I recently finished the PS5 remake of Demon’s Souls and Housemarque’s bullet hell opera Returnal – back in 2015 I was not exactly getting far in these endurance test games. However, I vividly recall one boss encounter from Bloodborne that was a masterful display of a haunting setting, unsettling character design, and delivering a 5 or so minute experience of pure white-knuckle tension and horror. I dare you to contend that this isn’t one of gaming’s scariest moments. I present the Father Gascoigne fight from Bloodborne. 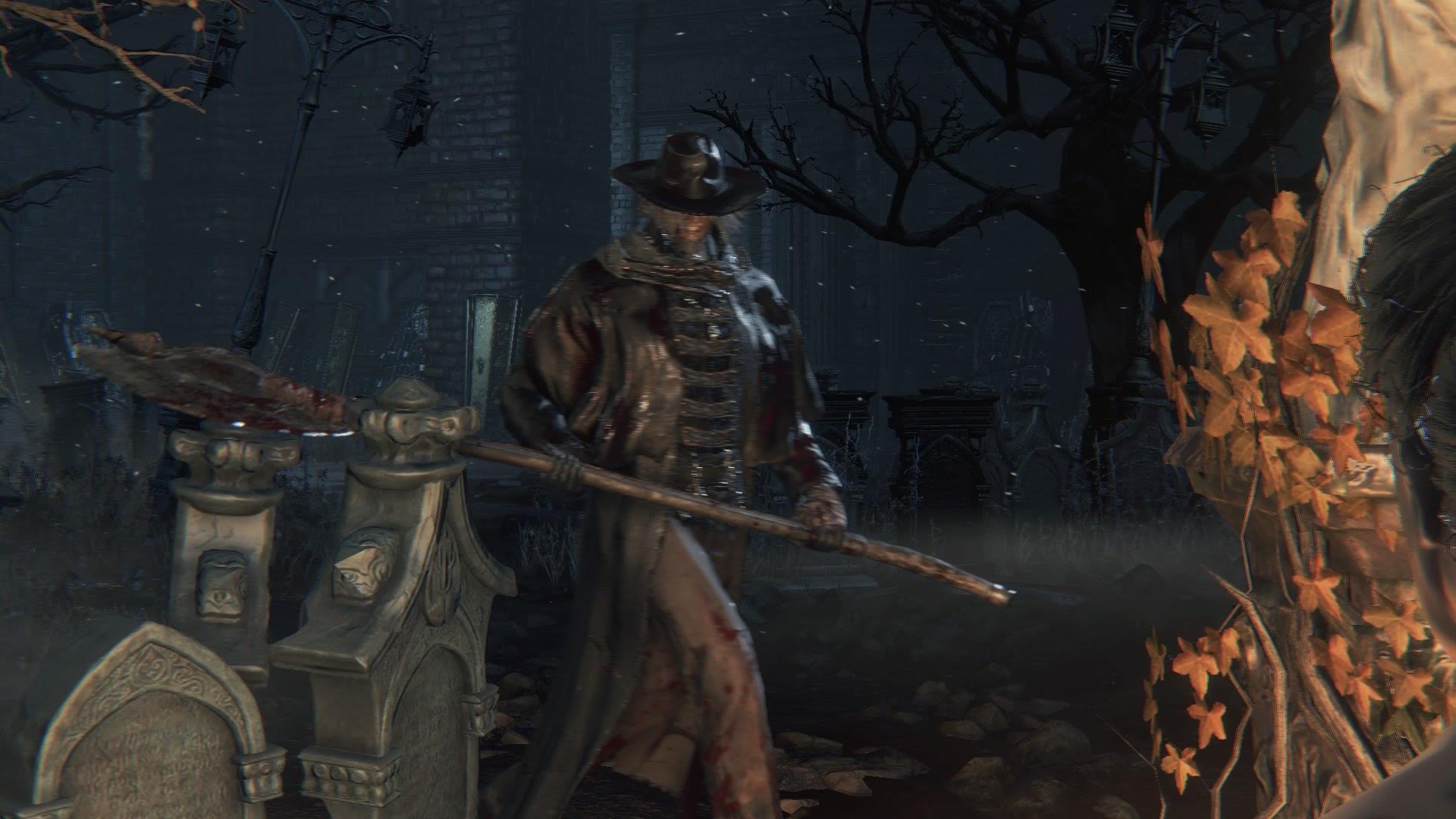 This fight begins like most do in From Software titles. You are ascending a long flight of stairs and at the top, there is a doorway covered with thick fog. The fog covering an open doorway has become the telltale sign to players that those devious humans at From are about to drop a boss fight on you. As you enter, you find yourself in a small graveyard with two flights of stairs at the back end of the courtyard, one from the right and one from the left. Both end up meeting at the top balcony in the middle, with a locked gate keeping you from progressing further. A cutscene begins and we see this lanky, tall imposing figure at the back of the graveyard, hacking away endlessly on some pour soul on the ground. He then realizes you are also here. He picks up his large axe, says a few threatening and obtuse phrases, and the fight begins as his long health bar streams across the bottom of the screen as you come out of the cutscene. 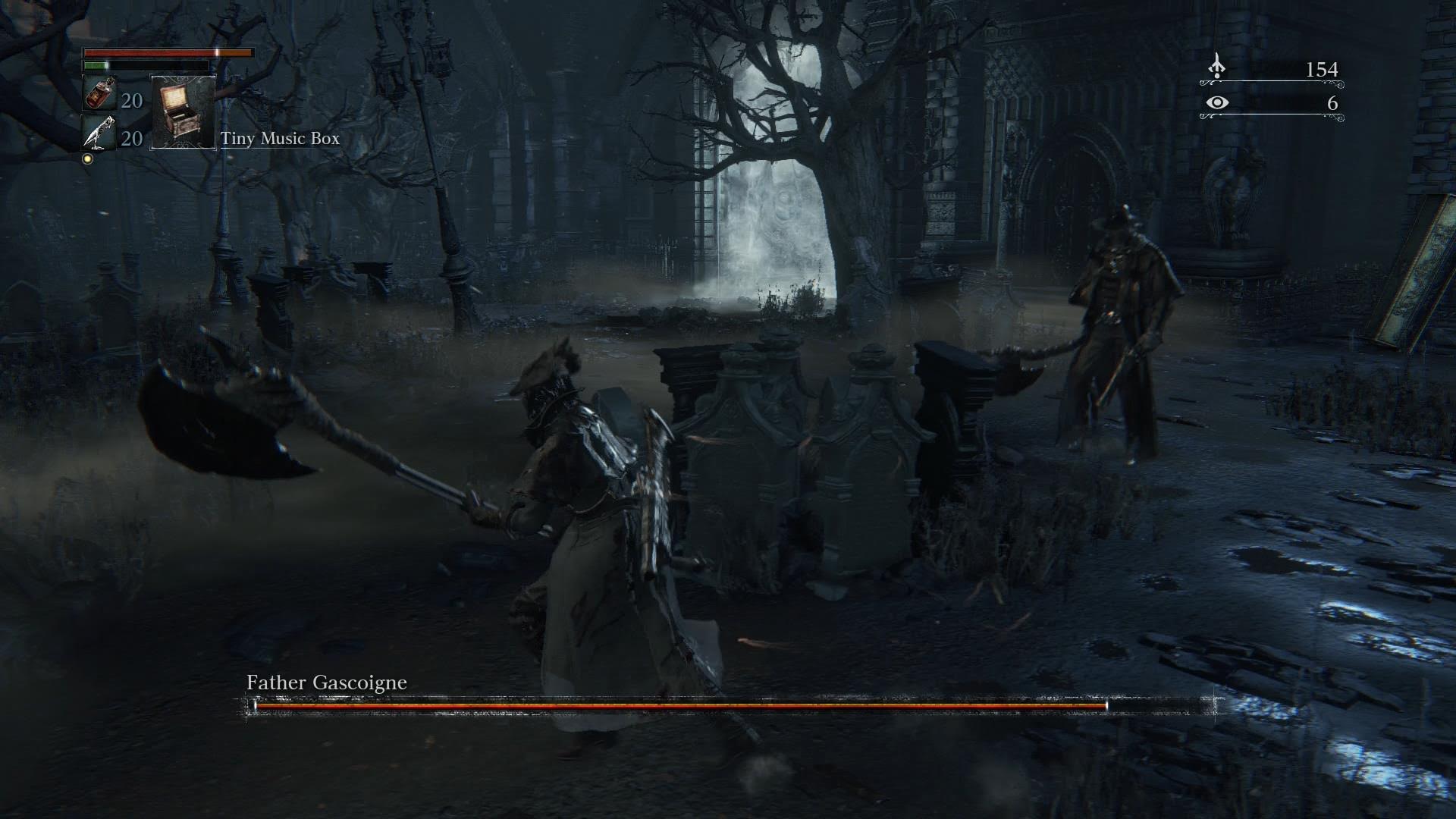 So, what makes this one of gaming’s scariest moments for me? First off, the location itself. You fight this madman and his large axe within a moderately sized graveyard. While the section is somewhat small, it is feasible to have a conscious and focused fight with this man, if it wasn’t for the excessive quantity of tombstones and gnarled trees that encompass the landscape. Father Gascoigne is a challenging boss encounter, and getting stuck on some tree, large stone or said tombstones as you try to avoid his heavy swing brings instant sweats to my palms for every second of this battle. You never feel safe enough to formulate a strategy nor have a location where you can retreat to re-engage the enemy after a quick cooldown. Another factor is the good Father himself. He just seems like a tall creepy man with a straggly gray beard, but you soon learn he is a raving madman who flies across the screen within mere seconds for the entire battle. He never gives you an inch. You need to be adept at using the blunderbuss to stun him for you to have a clean opening to deal major damage to him with whatever weapon of choice you decide on – I was still using the slick Saw Cleaver, which can either extend as a long-range weapon for less damage or close-up for a more intimate battle for more damage. The slick song and dance between defensive rolling, picking your spot to deal damage and healing yourself when you can via blood vials is something that needs to be mastered for you to become successful. Speaking of healing, the animation of using the blood vial to recover some of your health takes at least 3-4 seconds, which is more than enough time for the Father to get another hit in, so you need to select the right time to increase your dwindling health. The last major factor for why this is one of the scariest moments is what happens during the middle of this fight. As you deal with Father Gascoigne and find yourself fortunate enough to get his health down to around half or so, an insane twist instantly unfolds. The Father stops dead in his tracks and begins to emit steam all around him and screams with a high-pitched howl. Suddenly, Father Gascoigne the man turns into Father Gascoigne the blood thirsty werewolf. Now, as you have finally learned how to take down the man, now you must deal with the even more aggressive and varied attacks of the wolf. To say I was taken by surprise with this mid-battle revelation is an understatement. It took me countless tries to even get this boss down to around his half health level, and then for this game to transform this wild man into a blood-thirsty werewolf felt… cruel. After a few more attempts at trying to beat this beast, I finally achieved what I had been trying to do for quite a long time. I bested the crazy man/werewolf psychopath that was Father Gascoigne. 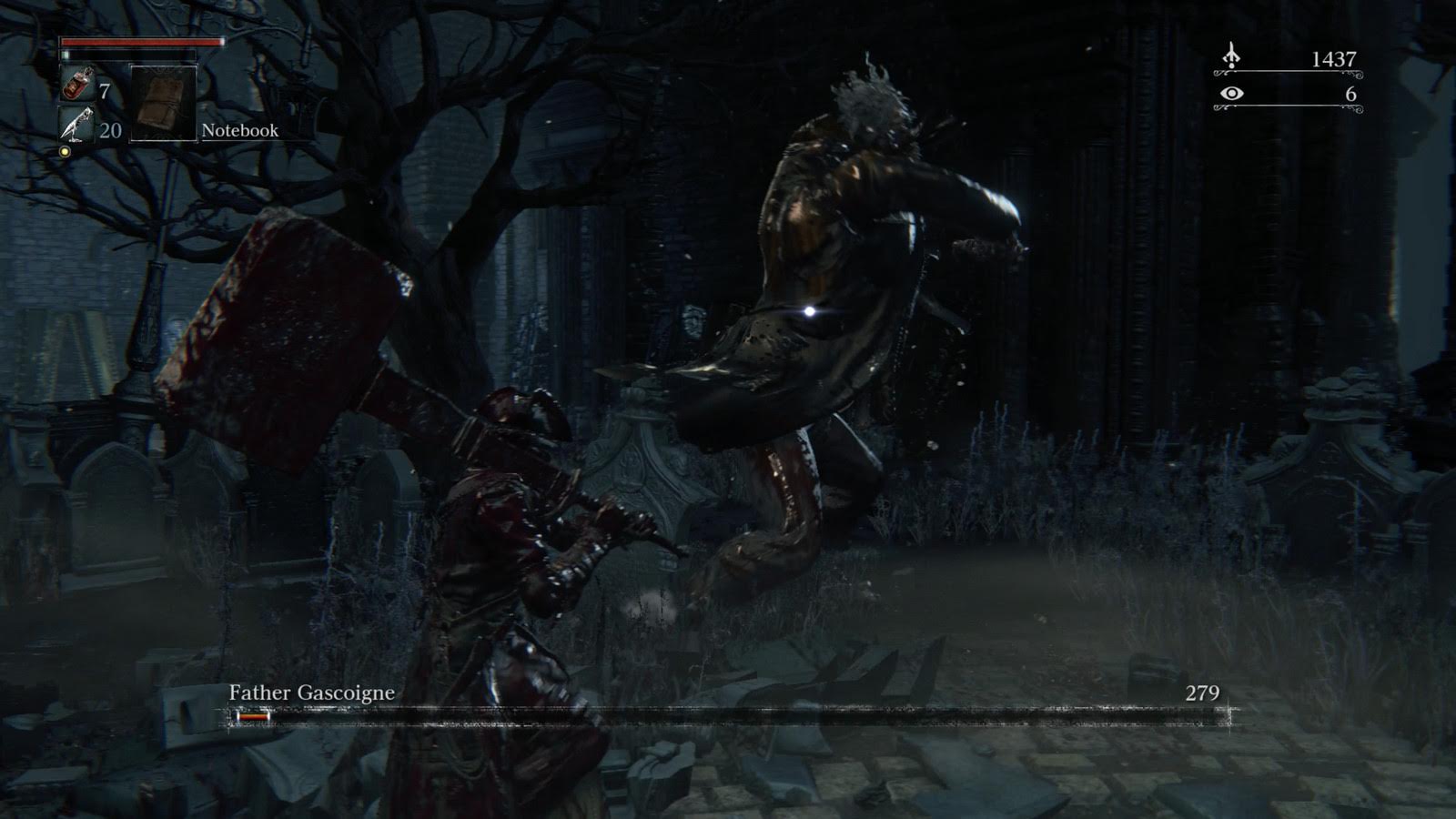 Gaming scariest moments don’t always have to involve being defenseless, surrounded by constant dread and unknown and deliberately slow paced and methodical, all to take the player/viewer by surprise. A great scary moment can involve a battle with something that is simply horrific, a marriage of gameplay and setting, something that makes the player sweat endlessly on their controller for that brief time as you try to do battle with the monstrosity that has been presented in front of you. Nothing exemplifies that more than the gothic horror game Bloodborne and that is illustrated perfectly by the battle with Father Gascoigne. If you can stand the intense challenge this entire game will provide, you will not be disappointed, and nothing quite gets you in the mindset of this title than this early bout with this insane individual.