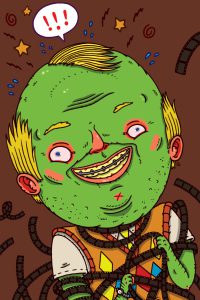 Hey everyone, one of our favorite events of the year is this weekend and I had the chance to catch up with Madeleine to talk about it! It’s the second annual Philadelphia Unnamed Film Festival (aka Now That’s What I Call a Film Festival… a tidbit I “learned” on I Like to Movie Movie today. Madeleine is one of the founders and she used to write for Fangoria, I could tell you lots more about her, but mostly, she’s just cool people. This is playing on all of our feeds (other than the one for upcoming kids podcast, because it’s not a kid friendly chat) and is the first of hopefully more bonus episodes that will do so. We hope you enjoy listening to our wonderful and talented friend.

Looks like for the second year, my lame ass may not get down there physically, but don’t let that stop you. You can be far less lame than me and get to Philly this weekend (I’m still trying to un-lame-ify myself and get there for a day, but our very own Garrett will be there all fucking weekend y’all). Here’s the full lineup and check back all week for our coverage!

7:00 – IMITATION GIRL: A mysterious young woman materializes in the middle of the southwestern desert.

9:00 – Opening night party and Legacy Award ceremony with Arrow in the Head

9:00 – Bizarre Block: Experimental and disturbing films from around the world.

11:00 – ASSHOLES: “A microbudget cross between SALO and THE SQUID AND THE WHALE.” — IndieWire.

2:30 – SPOOKERS: A close-knit New Zealand family run the most successful scare park in the Southern Hemisphere; facing their fears so others can face theirs.

7:00 – CHARISMATA: Psychological horror about a police detective whose sanity begins to unravel as she investigates a series of brutal ritualistic murders.

9:30 – RUIN ME: Alexandra reluctantly tags along for Slasher Sleepout, an extreme event that is part camping trip, part haunted house, and part escape room. But when the fun turns deadly, Alex has to play the game if she wants to make it out alive.

1:00 – RIFT: Two men in a secluded cabin are haunted by their dead relationship.

3:30 – 100 ACRES OF HELL: When ex pro wrestler Buck Severs travels to an abandoned wildlife preserve with his friends for ‘Bro’s Weekend’, they become the targets of a deadly manhunt.

PROSCENIUM THEATRE AT THE DRAKE

Trailers and ticket info can be found at: unnamedfilmfestival.com