Over the past few summers, I’ve reflected back on how Summertime was my favorite time of the year when I was a kid.  My birthday is in July… there is Independence Day and all its celebrations… we were out of school and I had a bunch of kids to play with because my mom was a babysitter all year long… lots of camping and swimming. Thinking back, it seems most of my vivid memories surround Summertime (other than those that revolve around Christmas/Winter holidays).

So this year, I wanted to come up with a Summer playlist… something to take me back those childhood summers and the memories that accompany.  As I tried to remember any songs that evoked memories of summertime, a lot of memories seemed too vague to clearly remember what songs correspond to what time of year, but eventually some things came into more focus.  Mostly, I remember playing oldies in the house, because that’s what my mom could tolerate/appreciate (and I pretty specifically remember one Summer when oldies radio KSAJ advertised giving away a 1965 Mustang as a part of a promotion/celebration they were holding that year). But I also remember playing my 80s Top 40 radio recordings in the backyard, and I’m sure that most of my favorite recorded-from-the-radio tapes were recorded in the summer, because I had more time to spend next to my radio and tape recorder. And the hits of 1985 really do seem to stand out.

A couple months ago, I was listening to the American Top 40 top 100 hits of 1985, and I came to the conclusion that, for me, that year best represents the entire decade of the 1980s. Short of any hits from Michael Jackson, that year saw chart action by the biggest names of the decade and featured some of the seminal albums that still define what the 80s meant to us as kids.

As I pondered how to create a summertime playlist/mixtape, it seemed to make sense to focus on one summer during my childhood… the hits that resonated around us and played on my portable radio and tapeplayer during that 80s summer… and probably several summers following. 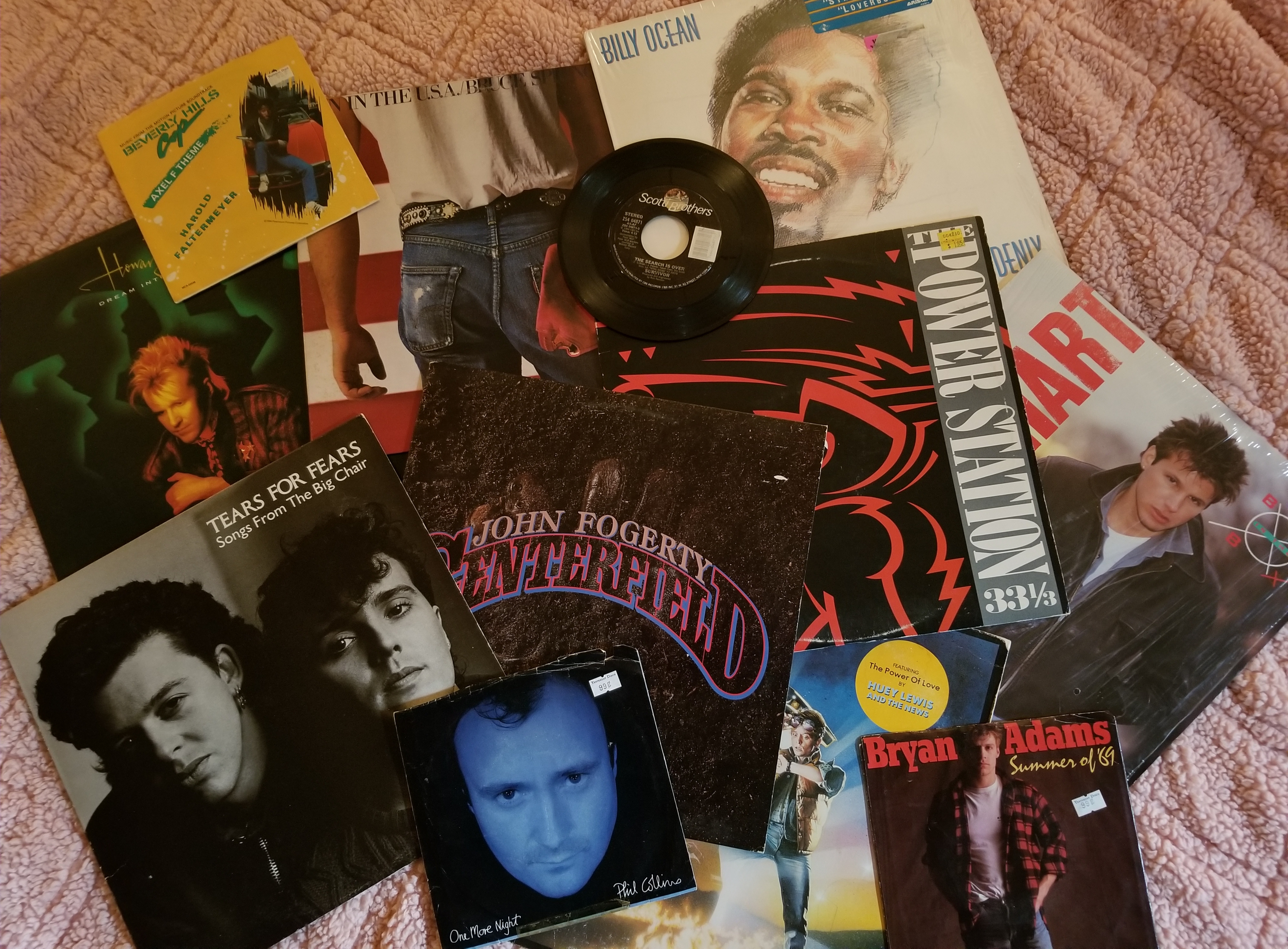 So, I chose the summer of 1985… because like I said earlier, the songs, artists, and albums of that year really seem to sum up the entire decade and the bulk of my childhood in a number of ways. Not all of these songs were hits during the summer of ’85.  Some were hits earlier in the year, but they were certainly played during that summer.  While I would love to still have those cassettes I had as a child, that I had recorded from the radio… I do not.  So I had to make this mixtape from scratch…sometimes remembering specific songs I had on those tapes.  But in making this “tape” I wanted to pull from a vintage/nostalgic format.  I didn’t have my large vinyl record collection back then, but I wanted to use the records I now have to piece together these memories.  So, I’ve recorded most of these tracks from my personal record collection… a few 45 singles and a number of 33 LP albums.  A few songs I had to find on the internet… but was able to find many of them recorded off of records.  One particular song towards the end of the tape was recorded from my 45, which is pretty significantly scratched, and skipped a number of times.  Luckily, I was able to use the file I had ripped from CD years ago, and edit them together to cover for the record skips… see if you can catch the edits.

This mix starts off with a song that peaked on the charts prior to the summertime, but it’s easy to equate it with Summer times because I picked the tape out for my birthday present (which might not have been my 8th birthday in 1985, might have been the next summer).  I certainly remember listening to AT40 during the summer, when we were camping, expecting the song to be #1, because I thought it was the biggest hit ever at the time.  But I was surprised to find the song wasn’t on the countdown at all by that point.  Also, I’m pleased that I still have that tape these 30 some years later.  Unfortunately, something (which I cant begin to remember) happened to the original cassette shell, but I was able to transplant the tape into a different cassette… and that tape is what you hear opening this Mixtape up. The warbles, clicks, and cutouts in that intro and first verse are how I heard the song for many years…and hearing it that way now takes me back.

I had to include some songs that reflected the concept of heat, sunshine, and other symbols of Summertime.  The next couple songs are exactly that: “The Heat is On” and “Some Like It Hot”.  You might remember the former being on a mixtape I posted last year, where you can hear me singing along to the song in the background.  The 3rd track in this mix still remains one of my favorite songs ever, and features one of my favorite drummer’s best work.  I definitely remember having a tape with that Power Station hit recorded from the radio.  Other songs that conjure up the feel of summer include a song I can’t help but see Jack Black dancing to when I hear it, John Fogerty’s tribute to America’s favorite pastime, and Bryan Adam’s tribute to one summer of his youth (although apparently the number in the title means something other than the year of that summer). 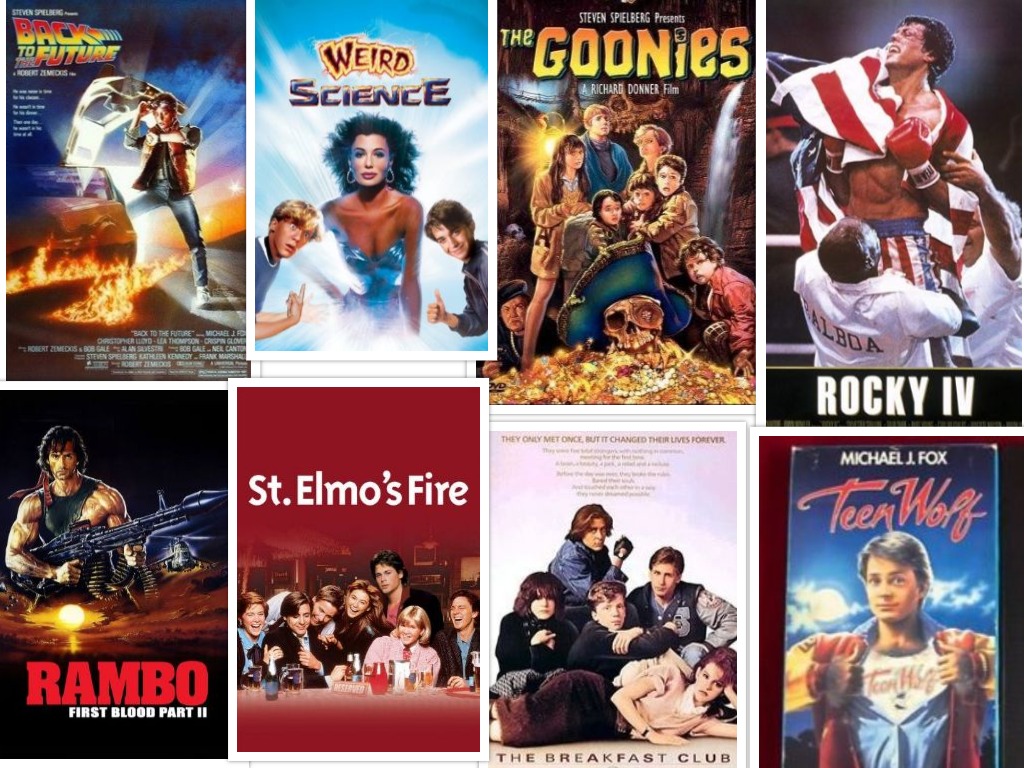 The 4th song on this mixtape is one that I felt guilty for liking as a young Christian kid.  There was just something about the song’s references to the “devil walking next to me” that made me feel like the song must have had some evil connections (thanks 80s satanic panic).  Of course, now that I’ve learned that the tune comes from a musical about an international chess game, the lyrics make more sense (a little more sense… would probably make more sense if I knew the fuller context of the entire musical).

Of course Madonna makes the mixtape… and it’s a song that didn’t come from her massive hit album, but rather a movie soundtrack.  In fact, movie soundtracks provided numerous hit songs that year.  Songs like “The Heat is On”, “Axel F”, “Don’t You Forget About Me”, and “Power of Love” helped define not only top 40 radio, but the box office as well that summer.  And, those movies are only the tip of the iceberg of the decade/era defining blockbusters that filled movie theaters that year.

A couple of the songs on this mixtape have really resonated with me in recent years.  Of course I loved both Glory Days and Summer of ’69 as a kid.  Both songs really hit on my early love for Rock guitar.  But more recently, I find myself relating more to the lyrics than I did in my childhood.  What I find so “meta” about those songs is how they are songs from over 30 years ago, songs from my younger days, that are reflecting back on the artists’ younger days… reaching back to a couple decades prior to when I enjoyed them as a child.  The sense of nostalgic longing in the songs really hits me in the nostalgic longing of my 40s.

One song I distinctly remember hearing on American Top 40, (specifically one time when we were camping that summer and I was listening to the radio in my tent), is by The Mary Jane Girls.  While most of the songs on this mixtape are some of the biggest and most remembered hits of the decade, In My House seems to be a somewhat forgotten hit.  A few other songs that I really remember from that year, yet don’t seem to get the same recognition as other hits include Sade’s “Smooth Operator”, Billy Ocean’s “Suddenly”, and Corey Hart’s “Never Surrender”.

This mixtape also includes a couple songs I had to edit on my recorded-from-the-radio-tapes.  I had such a conviction against cussing, that when “Everything She Wants” and “The Search is Over” came to the cuss word, I had to record over those words with myself singing “heck” and “darn” so that I wouldn’t have to listen to the “sinful” words on my tape. 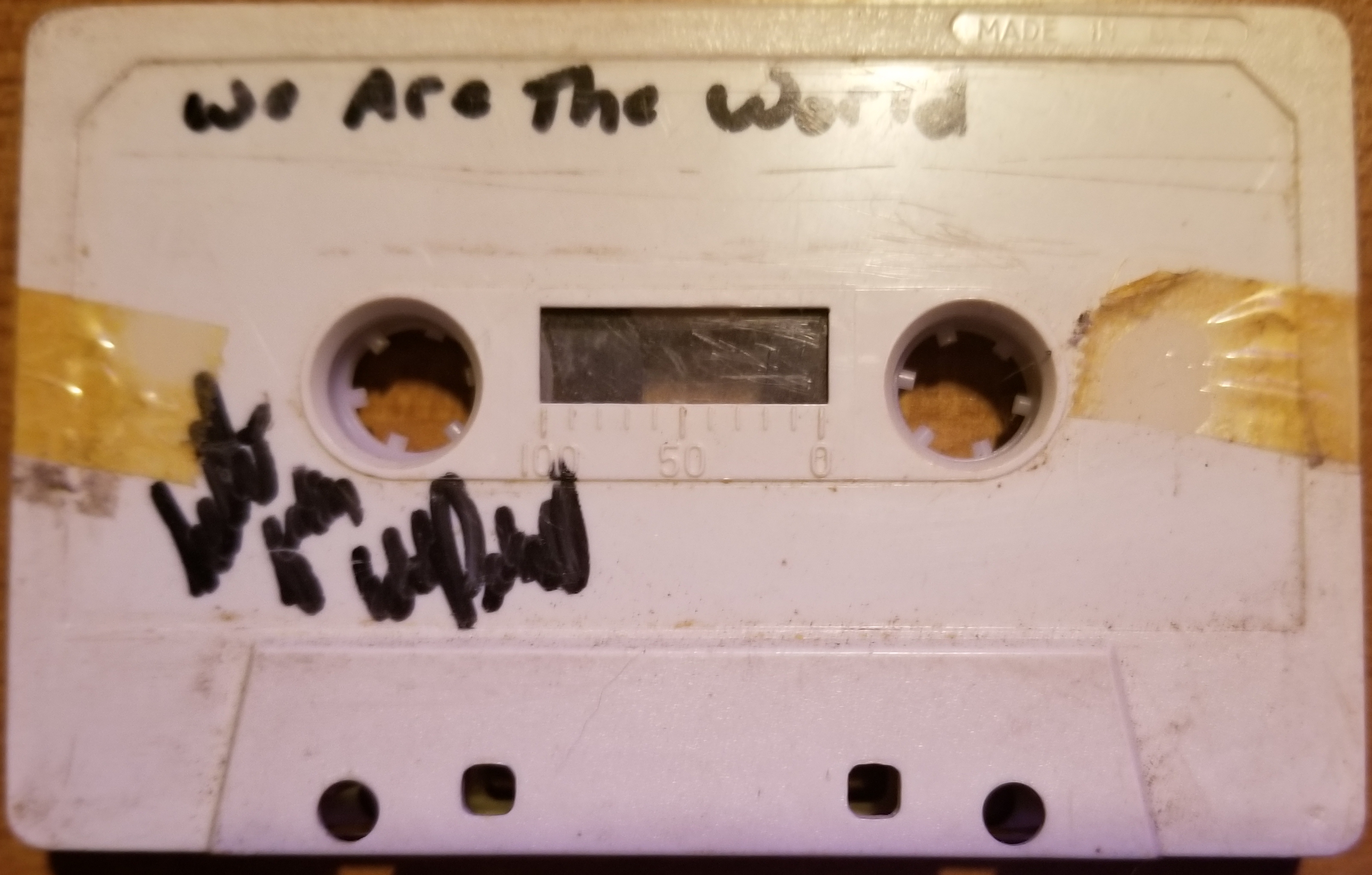 Even though Summertime is about movement and adventure, we do have to slow down for the occasional love ballad.  So I had to include “Suddenly”, “One More Night”, and “The Search is Over”, as well as Crazy For You.  For some reason, these specific ballads really hit my nostalgia, even a little more than some of the bigger rock cuts.  There just is something so special about “The Search is Over” that still gets to me after all these years… making it my favorite power ballad of all time.

That’s all I’m gonna say about these songs.  I wish I could talk more specifically about the memories they evoke and/or the cassettes I remember having them recorded on.  Like the one that was supposed to be my own top 40 countdown… but since I had recorded One Night in Bangkok first (I couldn’t arrange the songs in the order I wanted them, like I did this mixtape. I had to record them in the order they played on the radio), and that was the song I wanted as Number One on my tape, I had to have my chart count up, rather than down.  And then when my conviction about singing about the devil got the best of me, I had to record another song over it.  Luckily, that song turned out to be a great, equally as #1 worthy, rocking song that must have been called “Best Days of My Life”, because he kept saying that in the chorus/refrain.