Essentially a remix of various John Carpenter movies, including Assault on Precinct 13, The Thing, and Prince of Darkness, The Void is a bat-shit, wild ride that I mostly enjoyed. Some remarkable practical effects, memorable visuals, and more mysterious plot threads than the entirety of Twin Peaks, this has everything my little movie-loving heart desires. There is in fact so much promise here that I wish it were even half as good as any one of the Carpenter movies they’re paying homage to. Somewhat unfortunately, this lacks the formalism and soul that Carpenter brought to his movies, not to mention truly likable characters and a cohesiveness of plot and story. This movie is ultimately pretty unwieldy, with little room for our emotional connection to any of the characters or story elements, and yet it does leave an impression.

And that’s because there really is a lot to like here. There are practical monster effects on a level I haven’t seen in years, the cast is up to the task of holding these crazy ideas up with some credibility (they even got their own Donald Pleasence look-and-act-alike in Daniel Fathers), and as the movie moves into it’s third act it picks up a break-neck pace that made anything that felt under-cooked just not matter at all to me. The final 30 minutes of this are so exciting, and weird, and ridiculous that you have to admire it, even it feels a bit Beyond The Black Rainbow by the end (in both style and substance, actually). I could’ve done without the final shot in the movie, but it’s already so far gone into the territory of nonsense at that point that it doesn’t really matter. (Garrett)

I mean… I guess Garrett isn’t wrong here. In fact, I’ll gladly assert that he’s not. However, I just really couldn’t latch onto this one the way I thought I would, the way he did. I love Carpenter, but I didn’t feel the Carpenter influence the way Garrett did. To me, this lacked that essential fun element that draws me to my favorite Carpenter entries like They Live, Big Trouble in Little China, and Escape from LA. This movie simply wasn’t fun for me; admittedly, I really don’t understand why.

On the other hand, I did see a decent – if not legitimately good – Hellraiser sequel in this somewhere, though it was buried in a lot of muck and a ton of painfully odd pacing. It was slow for large chunks, then suddenly lightning quick for a few brief moments before returning to its plodding. Ultimately, I struggled to pay close attention, which was difficult for me as I was truly looking forward to this one. Perhaps that’s the biggest culprit though, my high expectations. (Justin)

As I’m sitting here writing this I’m recalling some specific images that will be forever burned into my brain. In the first act there were some scenes that made me worry this movie was going to hold back and not fully deliver on some of its early promise. It practically over-delivers by the end, as it sort of forgets to make sense of the various plot threads at play and tie them together, instead favoring pure shock and awe to keep you in your seat and interested. There are unforgettable creatures in this, a zombie-like practical effect that made me squeal with both fear and delight, and some full-tilt Lovecraftian stuff that the more I think about, the more I like.

Part of me wants to say this is schlock for schlock’s sake – despite attempts at giving the characters some dimension, anything not involving monsters felt a little forced, like it was only there to push the movie along to the next monster scene, and the story itself feels severely underwritten as it just makes less and less sense the deeper you go. Yet, the more I reflect on it, the more I like it, and the more it makes sense that it doesn’t make any goddamn sense; it is, after all, a Lovecraftian nightmare of sorts, that you could perhaps say uses dream logic to explore the nightmare that is grief. There’s certainly something like that going on here, though it doesn’t quite explore any of it enough to make that clear. (Garrett) 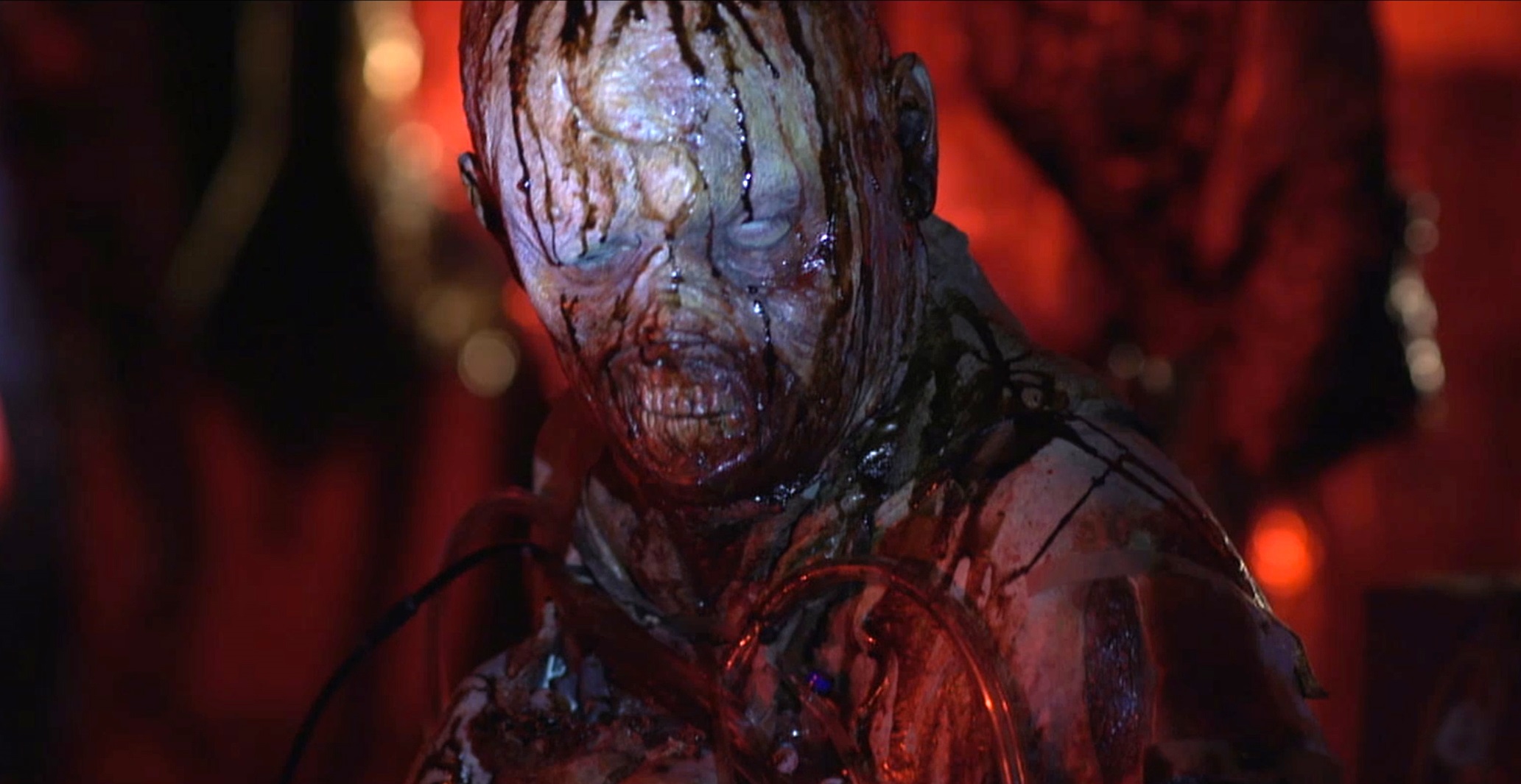 Garrett called this film bat-shit and seems to feel it’s largely an experiment in schlock. Neither of these assessments really feel accurate in my mind. I think part of this, again, is expectation… or in this case, perhaps more accurately, comparison. Having watched Trent Haaga’s 68 Kill just prior to this, my bat-shit meter was likely thrown way off. The recent glut of Vinegar Syndrome releases and Grindhouse Channel pieces I’ve written and/or reviewed for publishing could have really screwed up me schlock meter too. So, I wouldn’t put much stock in my thoughts here, if I were you.

The main point of convergence on our thoughts on this film are, however, in one of the things Garrett really hits here; the creature design is pretty fucking stellar and there’s a pretty Lovecraftian thing going on. In fact, I guess that is where I will gladly agree about the Carpenter comparisons… seeing as this film is the same type of “Lovecraftian” as he is – which is to say, both Carpenter and this film adapt Lovecraft without adapting Lovecraft. Part of my issue with this film is how much potential is really there and how the film refuses to really even try to reach that potential. (Justin)

On its own terms, The Void works pretty well and is something I would gladly re-watch, even if just to see someone else’s face as the movie unfolds. It is certainly a good time with many worthwhile sequences and applause-worthy effects work. But I can’t help but think there’s an even better movie here that devotes a little more time to its characters and making sure there’s a stronger thematic resonance throughout, hopefully giving the ending a bit more weight and meaning. (Garrett)

Applause worthy effects, indeed. While this may be our only real point of agreement, it’s certainly one area when we really are sympatico. I guess we won’t have to get into true fisticuffs over this bad boy! (Justin)

The Void was part of BUFF 2017’s truly awesome lineup this year. It played tonight, so we hope our Boston area fans got to catch it and can set us straight about what’s what as far as this one goes.